Photographing star trails with the old film cameras was quite easy but then became a challenge with the early digital cameras. With the newer digital cameras, such as the Nikon D200 onwards, it once again became easy. 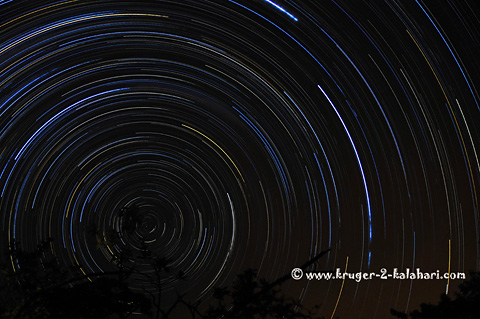 This photograph was taken from the tents in Punda Maria camp, Kruger National Park.

Here we discuss three methods for shooting these trails but you first need to ensure a few things in order to get successful star trail photographs:

• In the southern hemisphere you need to point the camera in a southerly direction.

• Photograph on a night when there are no clouds and no moon – that would be when there is a ‘new moon’, including the few days before and after this new moon.

• Shoot away from lights – even if the lights are miles away, with a long exposure they tend to show up in the picture. In this picture (taken as one long exposure) the glow you see on the horizon is from a veld fire that was burning between Satara rest camp and the Orpen gate in the Kruger Park, about 30 to 40 kilometers away from Olifants camp!... 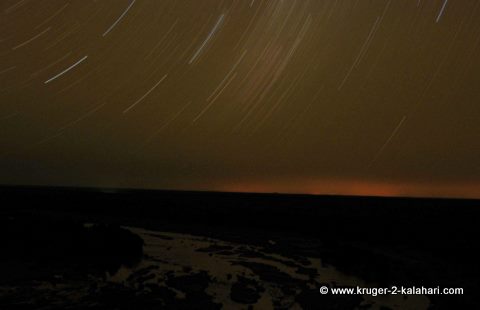 ...Star-trail taken with one long exposure from Olifants Camp. You'll notice that the star trails are not as bright and sharp as the first photograph - this is because the light from the veld fire has made the image too bright. You must shoot star trails on a dark night with no other light source!

• You need to ensure a stable tripod so when setting it up make sure you jiggle it around so that it is firm on the ground.

• Make sure the tripod head is tight as you don’t want it ‘creeping’ while the picture is being taken.

• Try and get some point of interest in the frame – it could be a tree, river, or boulder, anything that will add a bit of interest to the star trail picture.

• The f-stop can be anything from f2.8 to f4, depending on what your lenses’ biggest aperture is.

• The camera should be set on ‘Bulb’.

• The lens should be set to infinity.

• You should put the eyepiece cap over the eyepiece. This is to prevent stray light from entering the camera from the rear. Keep in mind that you will most probably be stumbling around in the dark with a torch and we have had instances in camps where the neighbors are shining their spotlights all over the place looking for animals and they are unaware that we are shooting star-trails.

• You should use a wide angle lens; we use anything from a fish-eye lens to a 60mm lens depending on the circumstances.

• If the lens has VR (vibration reduction) turn it OFF and set the lens at infinity.

• The camera and lens should be set on ‘manual’ – the auto-focus must be OFF.

• Make sure the horizon is level – you can set up the camera while it is still light or use a Hama Spirit Level. If you don’t get the horizon straight you can always straighten it later in Photoshop, Google Picasa or whatever editing program you use.

You now have three options:

1) to make the exposure with one long exposure, 2) to use a series of short exposures and then join them together, or 3) to make a double exposure.

Here you can use a simple cable release such as the MC 30 as you open the shutter for anything from one to four hours and then you close the shutter. You must keep the camera Long Exposure Noise Reduction feature ON. If you don’t, the picture will have so much noise and look terrible.

By keeping the feature on, however, it doubles your battery usage meaning that a 1-hour exposure will take 2-hours or a 3-hour star trail exposure will now take 6 hours, as the noise reduction works for the same amount of time you had the shutter open to take the photograph.

Once you have switched the cable release off do not turn the camera off as this will turn the noise reduction off! 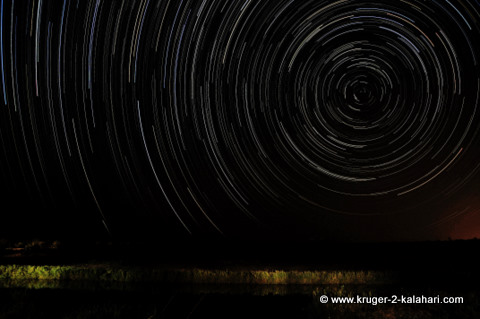 ...Star-trail taken with a series of short exposures from Shimuwini Camp. You'll notice the light on the reeds in the river - this light came from people's spotlights as they were watching hippos and crocodiles. With this option you don’t need a long-lasting battery as there is no noise reduction in operation. So here you must turn the camera Long Exposure Noise Reduction feature OFF. You also need to ensure that you have no other pictures on your compact flash card as you will need a lot of space.

In addition you need the more expensive Nikon MC-36 remote as this has a timer. You then set the timer as follows:

When the series is finished you need to take one last photograph with the lens cap on the lens. This last picture will be used by the software to eliminate noise.

The program I use is free and can be downloaded from: www.startrails.deWe don’t like fiddling for hours after we have taken our photographs but this Startrails software is so easy and quick to use that we can’t wait to shoot star trails each time we go away.

Another free product that you can also try is StarMax.

Take the first photograph of the main subject (tree, rocks etc.), exposing for the main subject, then take the second long exposure of the star trails as described under option 1 or option 2 above.

Return from Star Trails back to the Landscape Photography page

Return from Star Trails back to the Safari Photo Tips page