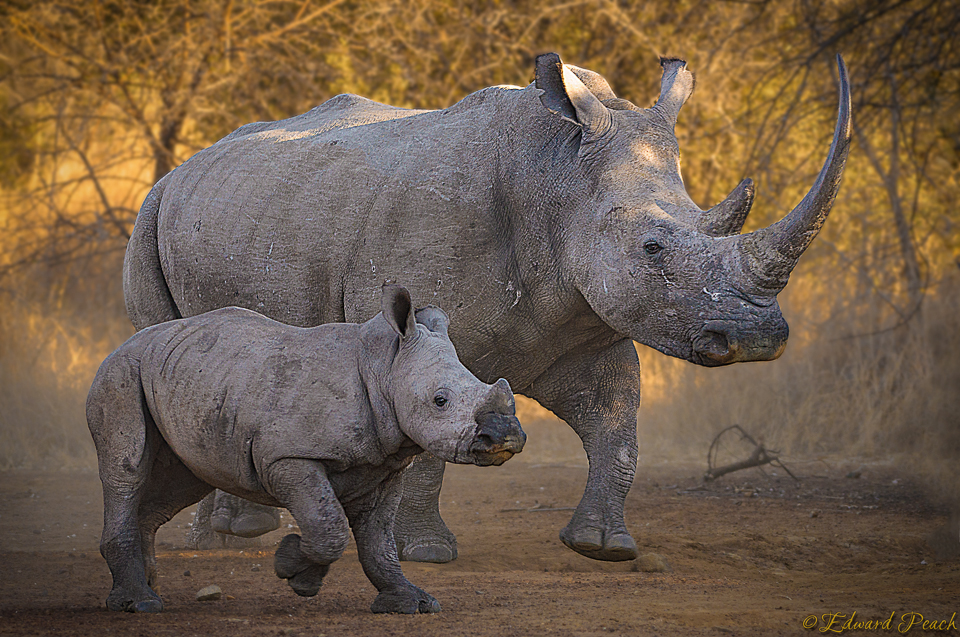 The rhino is one of Africa's 'Big-5 animals' - lion, leopard, buffalo, elephant and rhino. There are, however, two species of rhino found in African parks, the black and the white rhino. Their names have nothing to do with their color as both are either a slate-grey or battleship-grey.

Black rhinos are usually solitary animals while white rhinos can be found alone or in large groups. 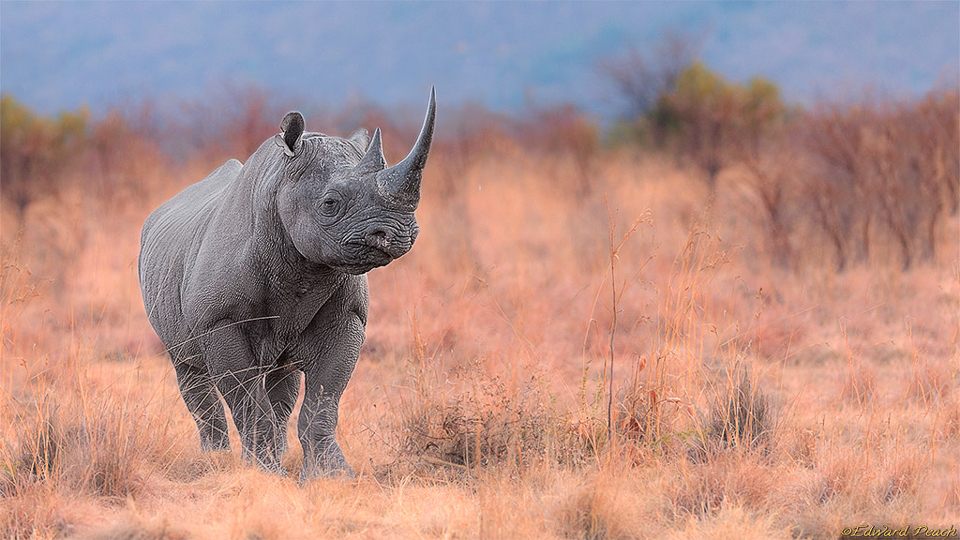 In the Kruger most of our white rhino sighting have been in the south of the park between the Crocodile River and Olifants River. In over 20 years of visiting the Kruger we have seen just 5 black rhinos but hundreds of white rhinos!

We have also had great sightings in Etosha, Madikwe and Pilanesberg of both rhinos. Etosha's black rhino sightings have mainly been at night at the camp waterholes, while in the Pilanesberg we have seen them by day. There are no rhinos in the Kgalagadi.

Finding a browsing black rhino and getting a photograph of it is an accomplishment because they are difficult to find in the bush. Black rhinos are found in densely wooded areas or where there are thick shrubs, while the white rhino is easily seen in the open grassy areas. 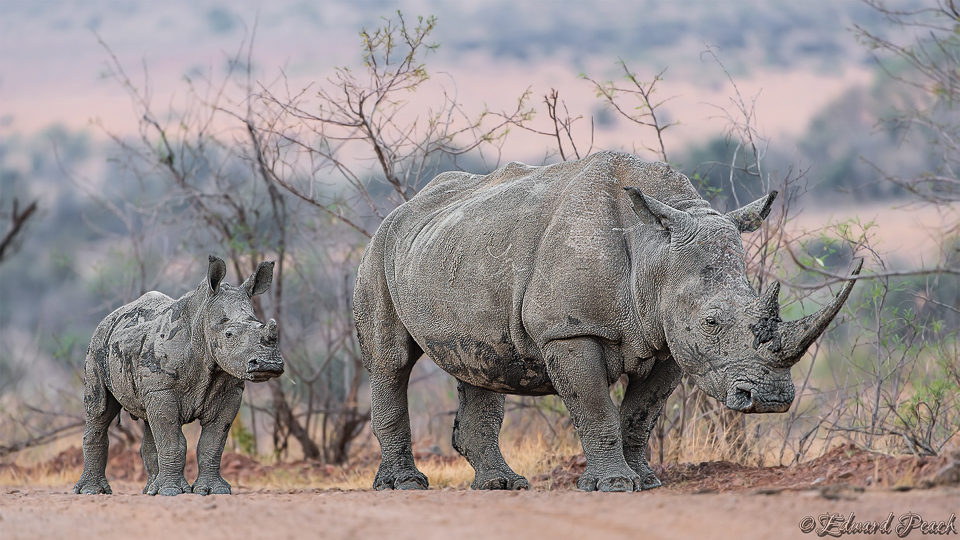 Mating rhinos are a rare sighting and during the courtship behavior male and females spar with each other and there is a lot of snorting and even bellowing.

Sexual maturity is reached by about five years of age and mating sometimes takes a day or two.

In the Kruger we once came across a very confused white rhino called Ore in the Mopani area - he had found a dead hippo and was trying to mate with it, we took some photos and showed them to the ranger, who was just a baffled as us as to this strange behavior... 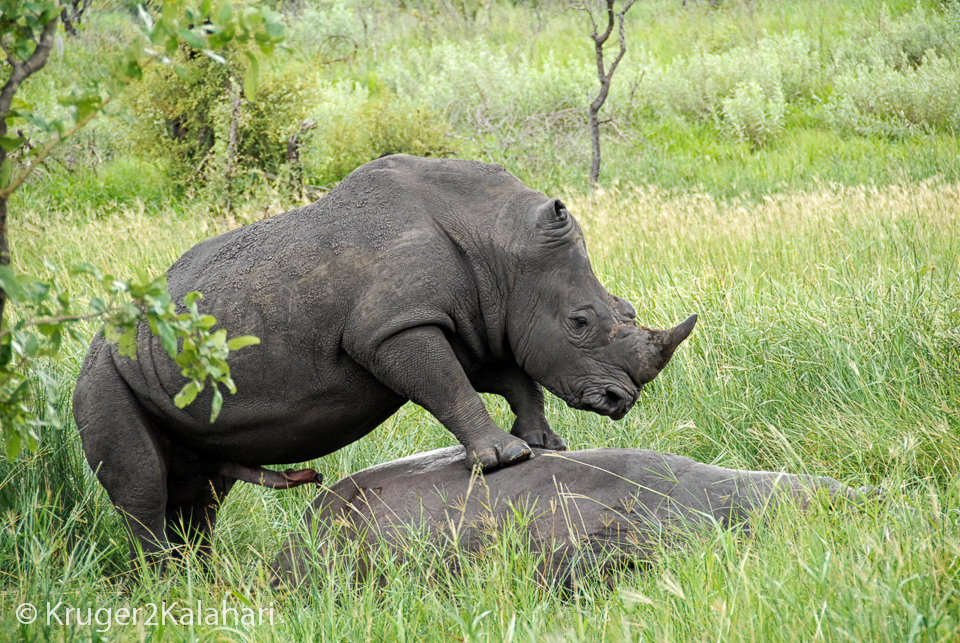 There is a behavior called flehmen (Flehmen a German word, meaning to curl the upper lip), this is seen during courtship, when it is used by males to assess the estrus state of females, and during the investigation of new odors.

Baby rhinos are the cutest little animals and fun to watch when you get to see mom and baby together. The black rhino baby runs behind it's mother while the, white rhino baby runs in front of its mother, which is one of the ways to tell the difference if you cannot see the mouth of the rhino.

Rhinos drinking make great photographic subjects because you can get reflections of the animal, color in the water from the setting sun or water spilling out of their mouths as they drink. 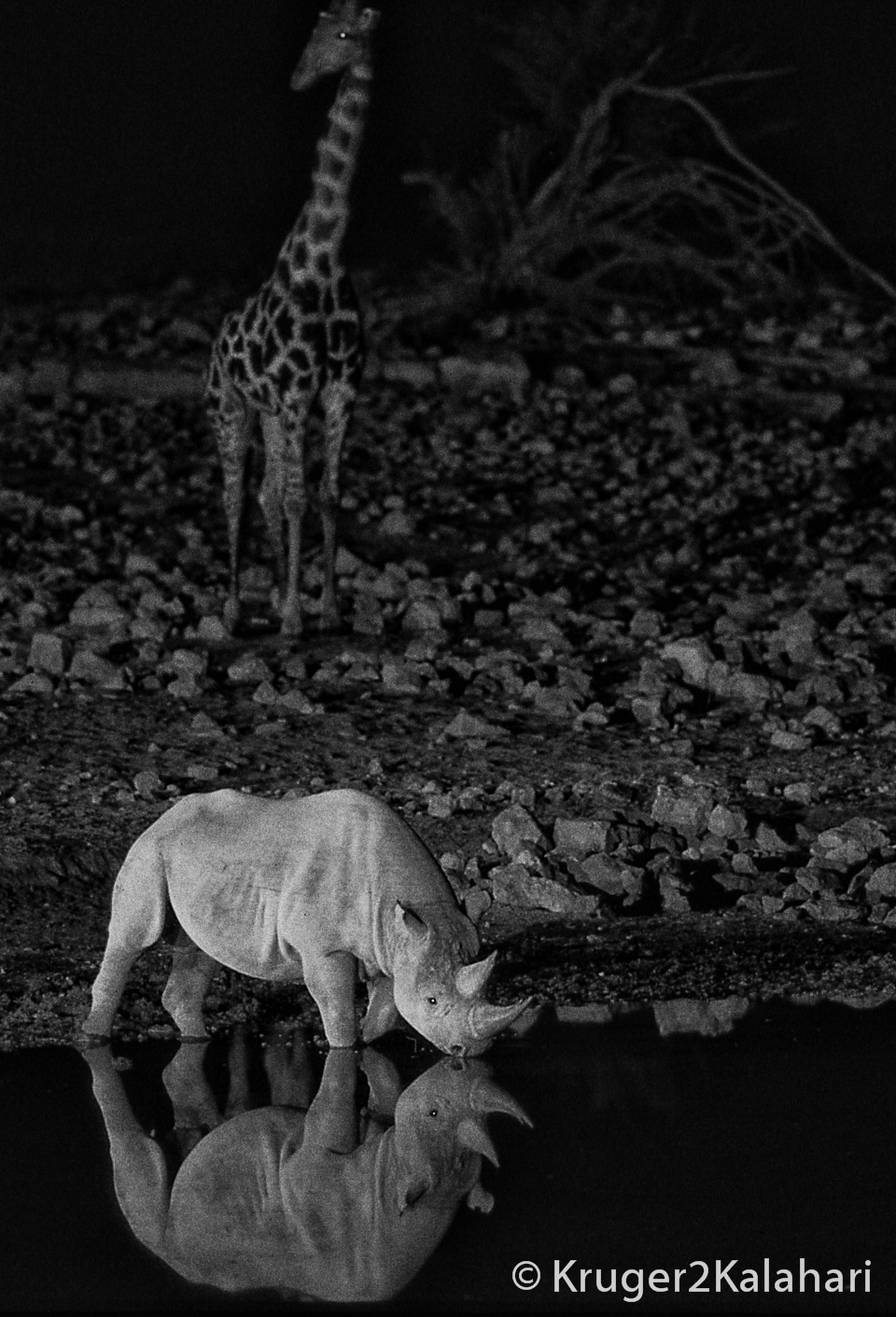 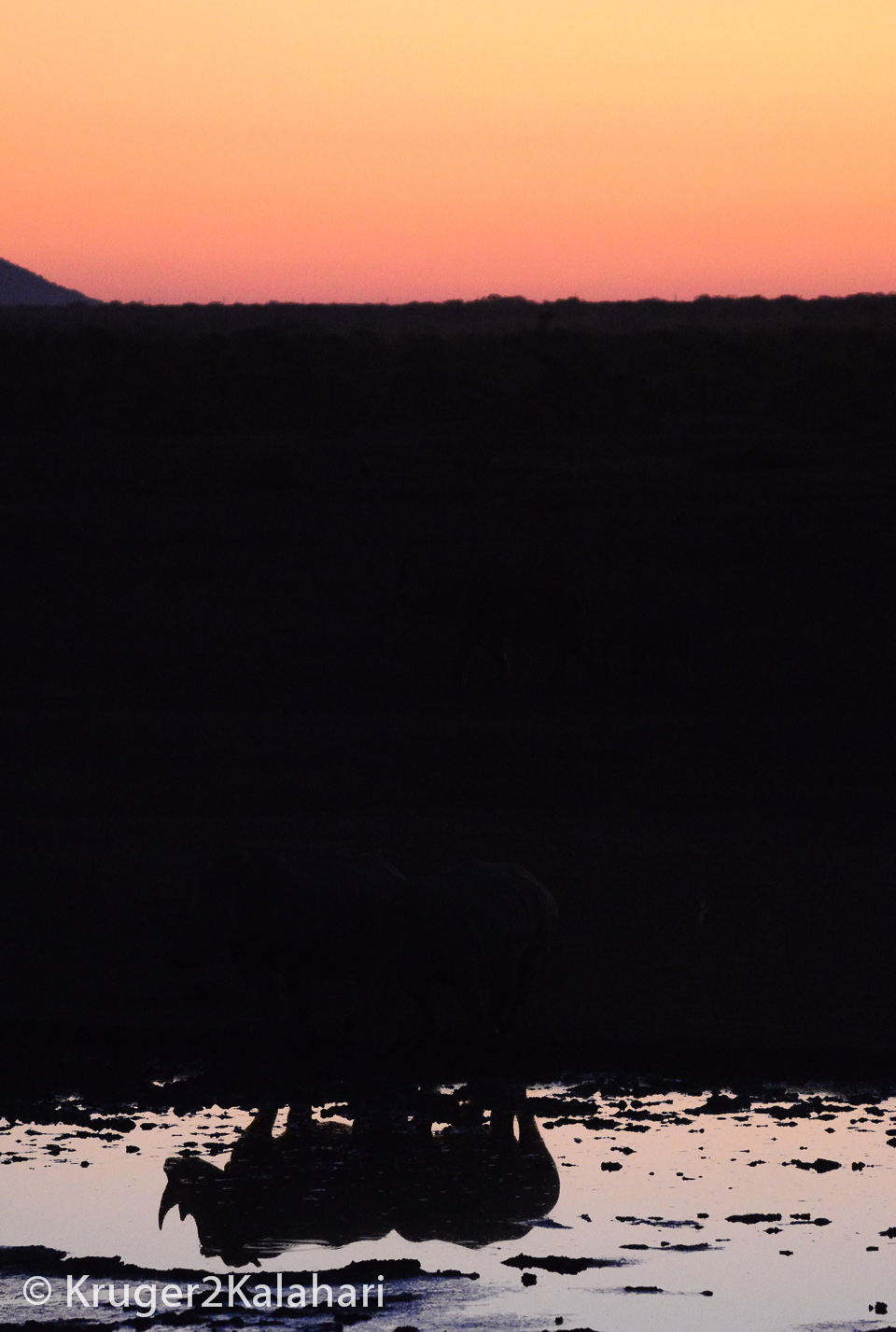 Both White and Black rhino can be found sleeping during the heat of the day normally in a cool place under trees or shrubs. They also love wallowing in mud and this is a great time to take photographs when they are calm and enjoying a cool mud wallow. 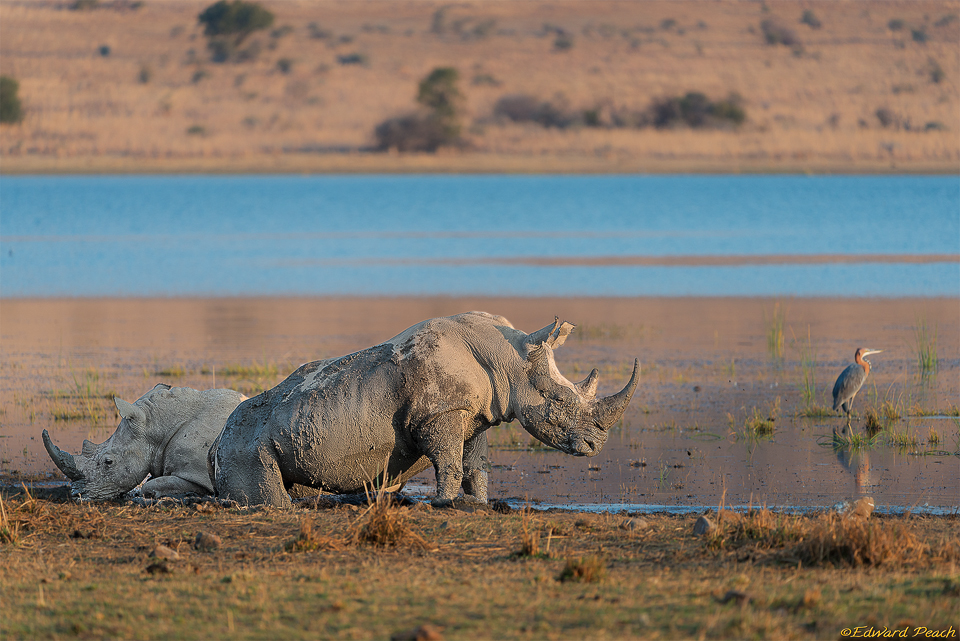 The mud wallow helps rid them of ticks and other parasites because the mud dries on their skin forming a hard crust which they then rub off against tree stumps or poles. This is fascinating to watch and sometimes you can get some lovely action shots.

The Black rhino is either aggressive or inquisitive and we have experienced both, once in the Kruger we were charged by a mother with a calf near Lower Sabie and in the Pilanesberg we had a black rhino walk right up to our vehicle and sniff us.

Most animals are unpredictable, so we give them space and respect that we are in their territory. Some people have not been so fortunate and have had a rhino charge them as this video shot in Etosha shows

Skukuza camp in the Kruger used to have a film lab where they developed your film and they would print duplicates of the interesting pictures and display them. Most of these 'interesting' pictures were of cars that had been attacked by elephants. rhinos, hippos or buffalos and the cars had huge holes in them or crushed bonnets!

Females do not urine mark but when they drop their dung middens they do not drag their feet through it or kick it around. When you see a pile of dung on the side of the road look out for the rhino and also for dung beetles as they go about rolling up their dung balls for mating. Photographing rhinos spraying can be rewarding if the light is right, especially back-lighting. 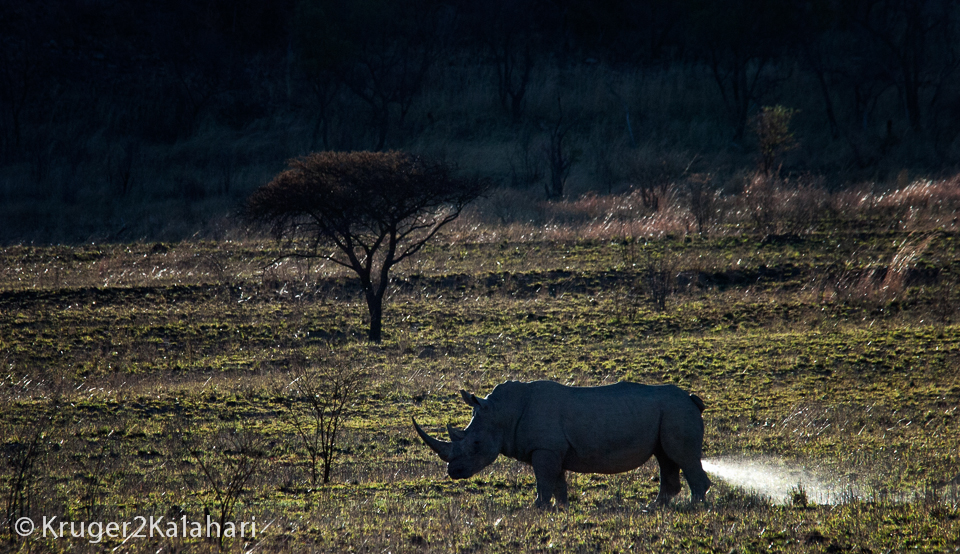 Because the rhino is so large, you can zoom in on the horn, ears or head of the rhino as it is grazing or drinking and you should also look out for birds, such as egrets, herons and ox-peckers, as they follow or sit on rhinos.

You can also use a wide angle lens to photograph the rhino in the context of the landscape. 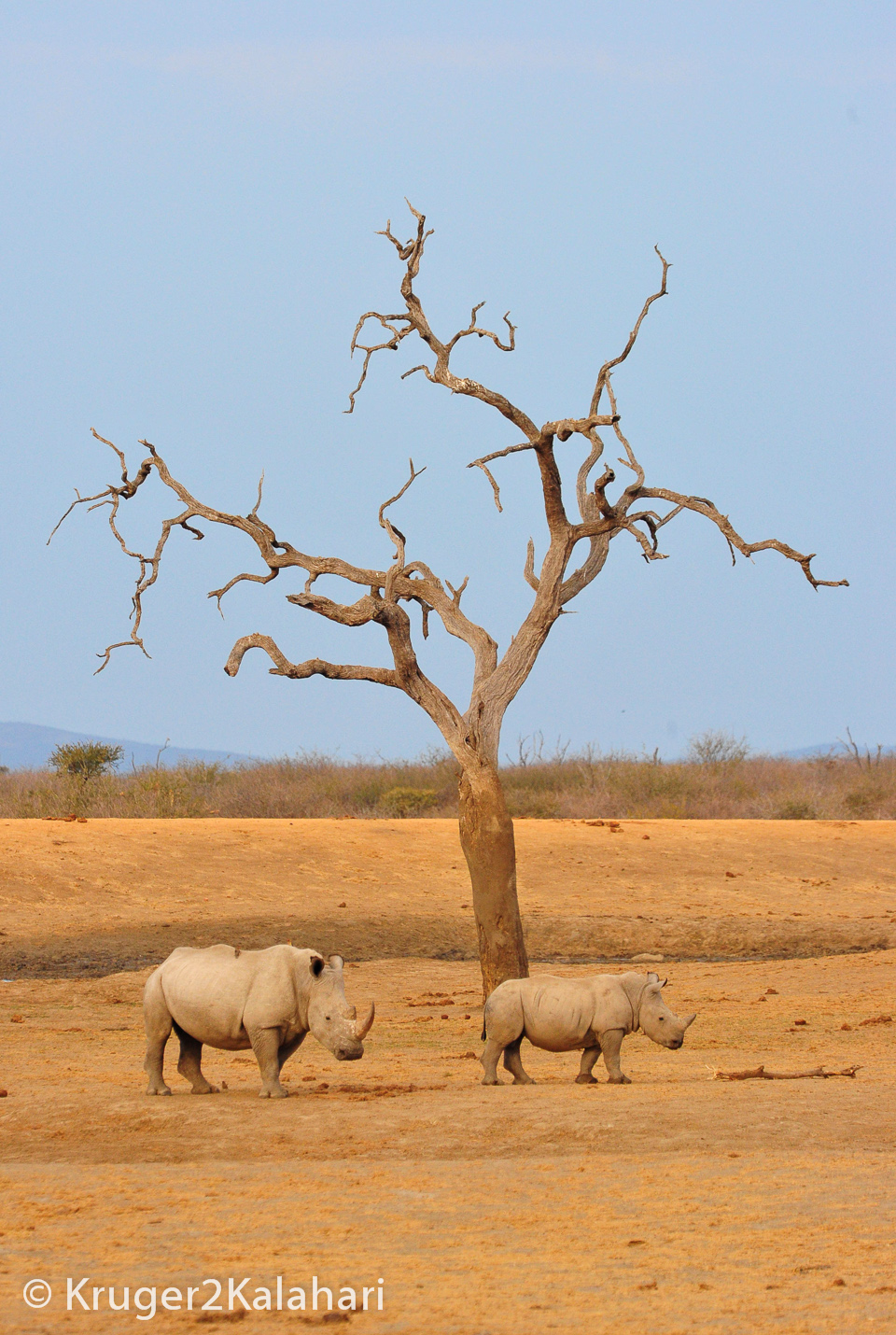 If the rhino is dry your exposure meter should expose correctly but if it is wet it gets nearly black so your meter may be fooled into over-exposing so just check your photos on your camera screen and if need be, under-expose by about half to one stop of compensation. 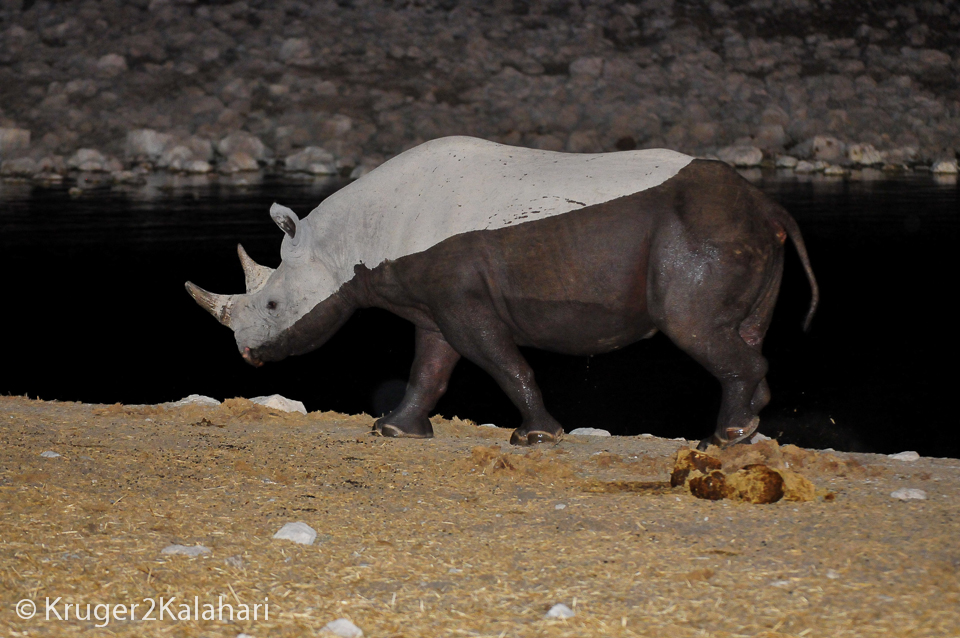 In this image, the rhino got into the waterhole so the sensor will see mostly black and will most-probably overexpose and provide too much power for the flash. To overcome this you must use either spot-metering or center-weighted metering and focus on the rhino, which is much lighter than the water. This way you'll get a more accurate exposure without the risk of over exposing the image. 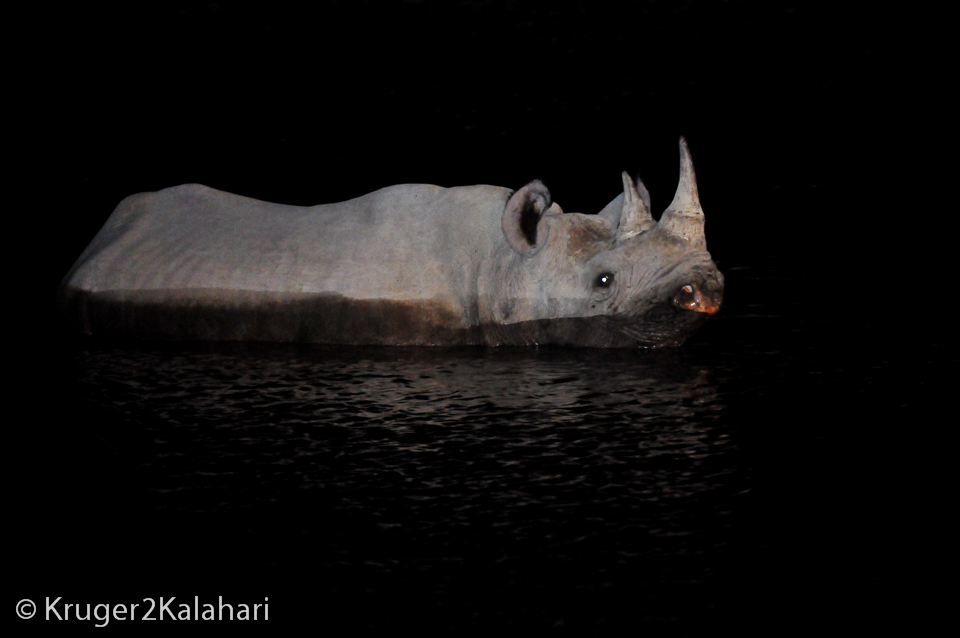 The sad thing about the Rhino is that they are being poached at an alarming rate. People in the East want the horns for medicine and other stimulants and pay the poachers a small sum of money for a horn which they then sell for a lot more once it is overseas. The horn does not hold any medicinal properties (the horn can be likened to your fingernails or hair) so education has been suggested as one of the solutions to this slaughter.

The images in this rhino gallery were all captured in the wild in four of Africa's best national parks and game reserves, namely the Kruger National Park, Etosha National Park, the Pilanesberg Game Reserve and Madikwe Game Reserve.