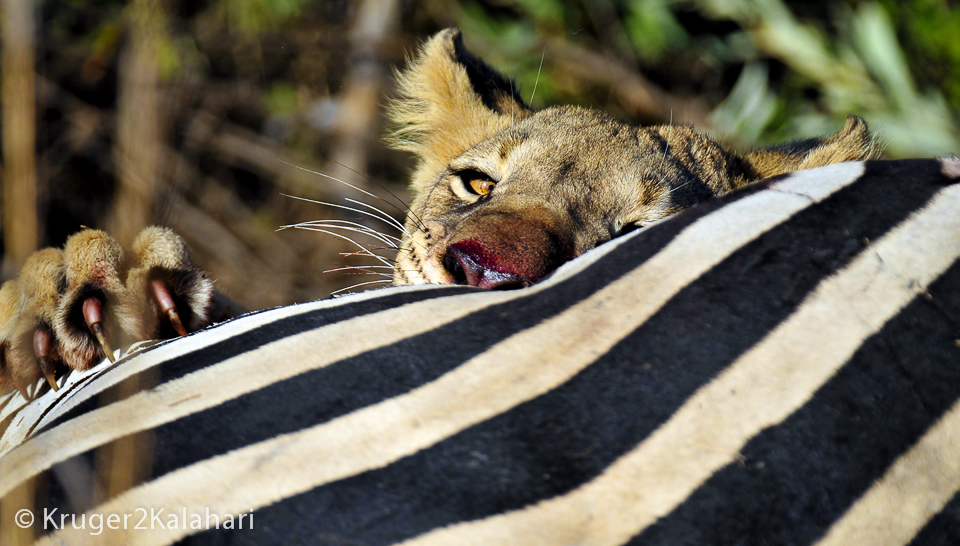 For most visitors to African national parks, the big cats are the most desired game viewing subjects and photographic trophies, with lions being at the top of the list.

The lion is one of the 'Big-5' animals (lion, leopard, elephant, buffalo and rhino) and the male lion has a mane that is very impressive and tends to make the lion the symbol of power and of the African wilderness.

Their manes are darker than the rest of their bodies but the Kgalagadi males have big black mane which make them stand out from the red or white sand dunes. They make great photographic subjects because they are just so majestic. 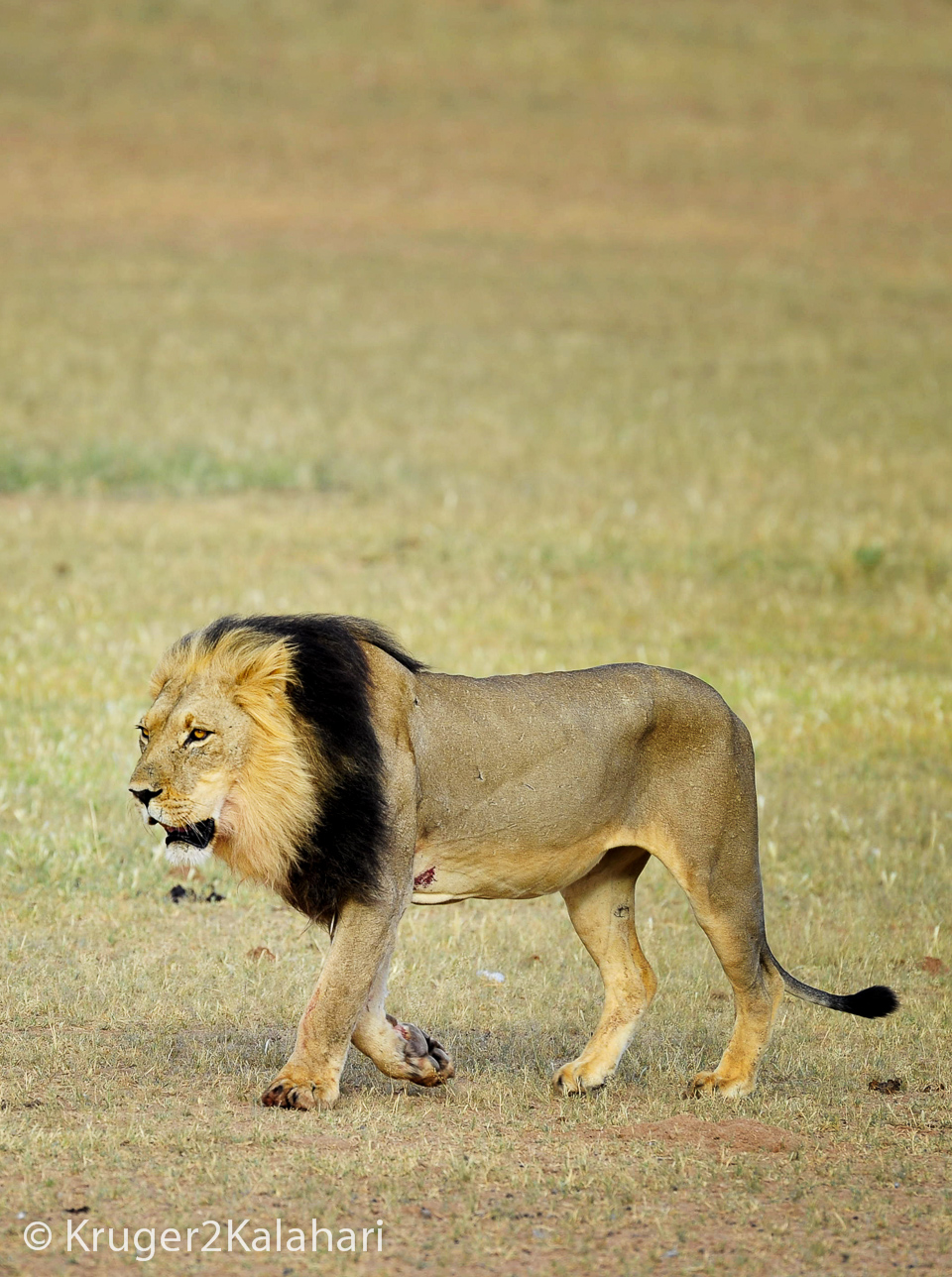 An adult male's mass is anything between 190 and 200 kilograms, the females is smaller with a mass of 110 to 130 kilograms and their life span is about 15 years.

The lion is the only social cat living in family groups called prides, made up mainly of females with their cubs and anything from one to maybe three or four males.

These nomadic males either form pairs, or stay single will replace other males when they become to old to defend their territories. They will then take over the new pride and if there are any cubs they may kill them, when the females lose their cubs they come into estrus so that mating can take place and the new males can father their own cubs.

Females will give birth after about 110 days to a littler of between two and six cubs, which she has away from the pride.

She hides her cubs in tickets or near dense rocky outcrops. She will leave the cubs and join the pride on a hunt returning to her cubs to suckle them, this is when the cubs are vulnerable because they can be killed by Hyenas or Leopards, while mom is off hunting. 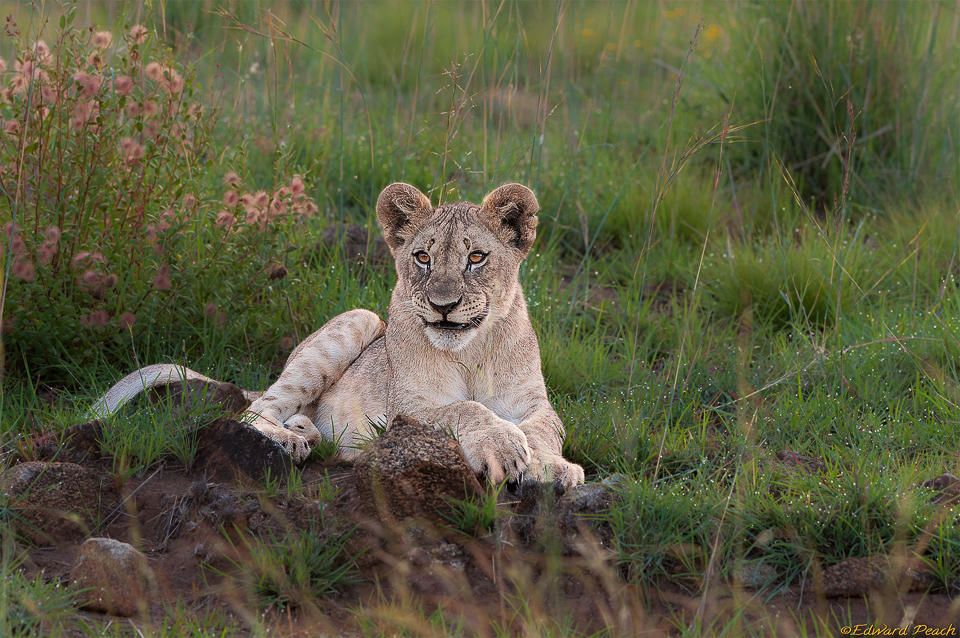 You can use the sightings boards, sighting books, sighting apps, speak to field guides and other guests or try to find them yourself.

It is, however, highly unlikely that a visitor will not see lions in the Southern African parks of Kruger, Kgalagadi, Pilanesberg, Madikwe and Etosha as they are accustomed to vehicles and are the ‘Kings of the Jungle’ who don’t fear much.

We have found many lions by watching the prey animals. Keep in mind that warthogs, wildebeest, zebra, giraffe, impala, kudu, and all the other antelope species are what the lions want to eat, so of course, they tend to be in the areas where the next meal is accessible.

We have often stopped to watch a bird or buck and have spotted a lion hiding behind a rock or a bush.

While we then get ready in anticipation of photographing a chase or kill, many other vehicles just drive past us as they think we are watching the prey!

Sometimes you will see the lion stalking the prey and other times the prey will alert you to the fact that there is a lion nearby. They do this by going stiff, staring in one direction, snorting and/or running away, depending on which prey animal it is.

You could see lions at any time of the day, but your best chances are between late afternoon and early morning as they tend to sleep for most of the day (in the shade under trees).

When the day starts to cool down they begin to arise. This is your opportunity to make images that depict stretching, greeting and yawning activities; all performed before they go hunting.

During the winter months lions tend to lie in the roads, both for warmth and because they don’t like the wet dew on the grass. Early mornings provide a good chance of finding them walking or lying in the roads.

If you go on a night drive you may get to see them in action. 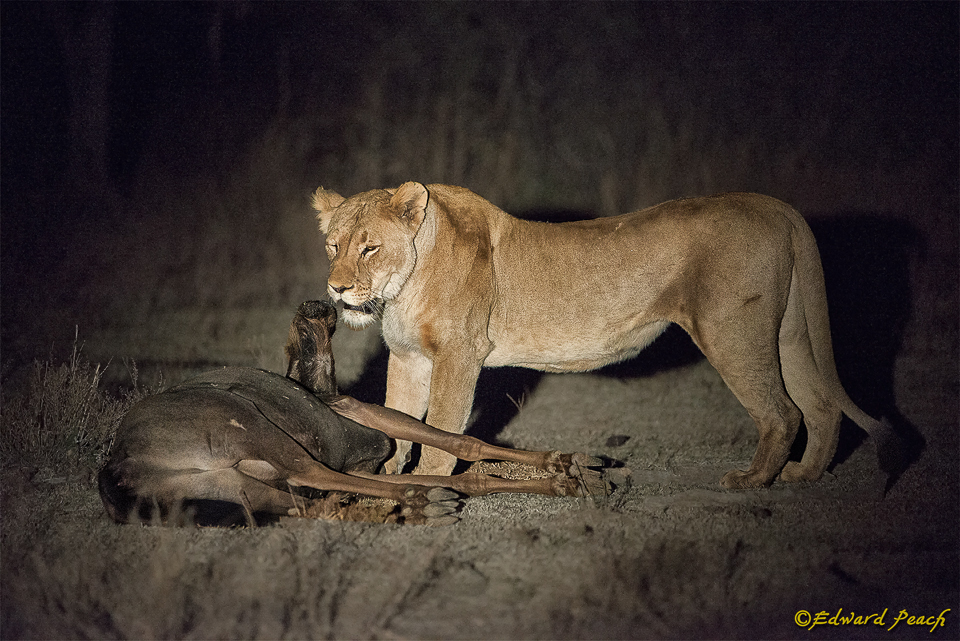 During the night drive, you should also be on the lookout to obtain back-lit images. There were two vehicles at the lion sighting below, so we asked the field guide on the other vehicle to shine his spotlight behind the male lion. 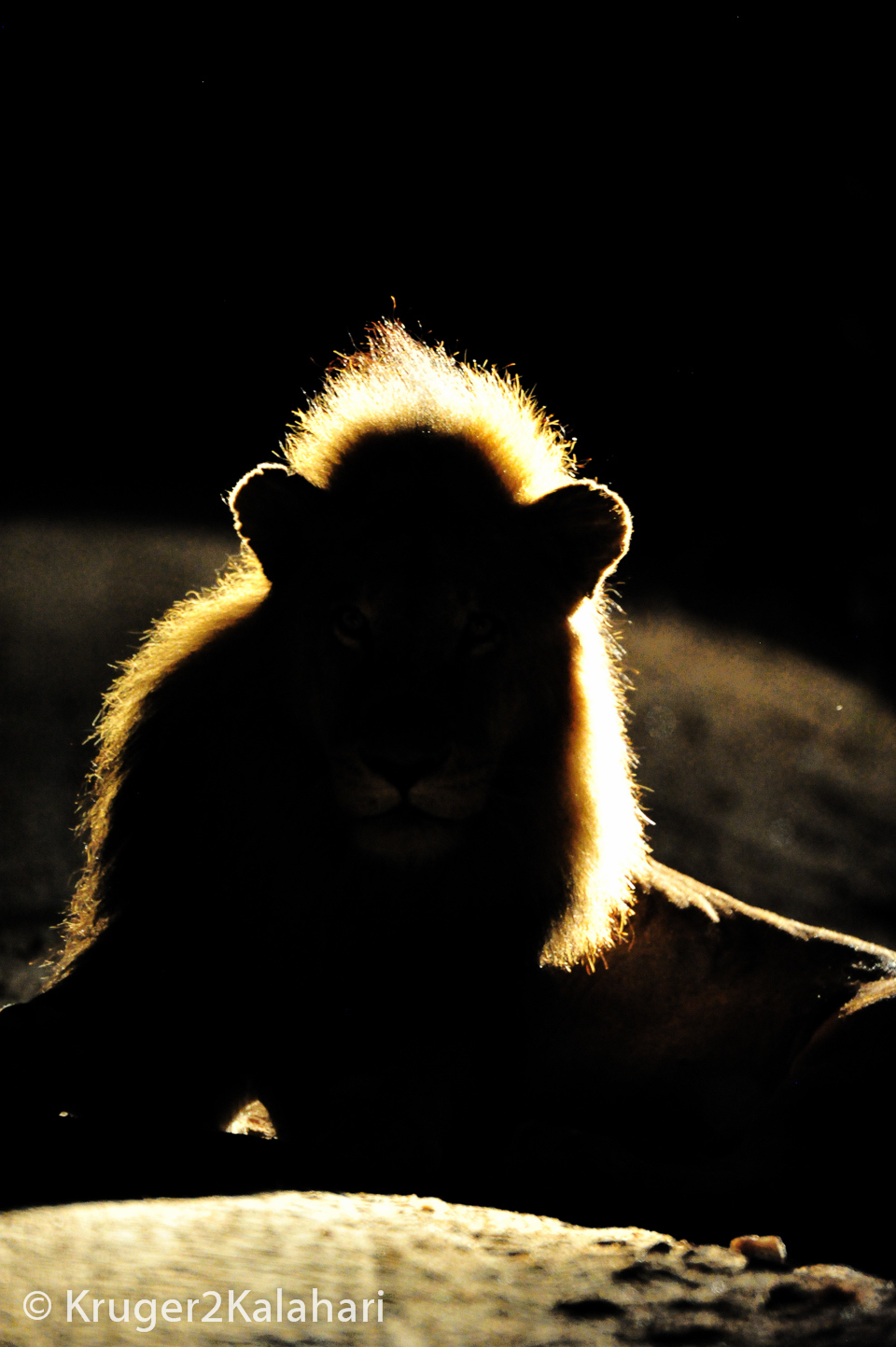 In the early morning you may get to see them with the remains of their kill or heading for their day's cool resting spot.

When prey is abundant you tend to get the above scenario but when prey is scarce or the days are cool, lions could hunt anytime. In winter you could also find them at midday sleeping out in the open or even making a kill like this one in the Pilanesberg...! 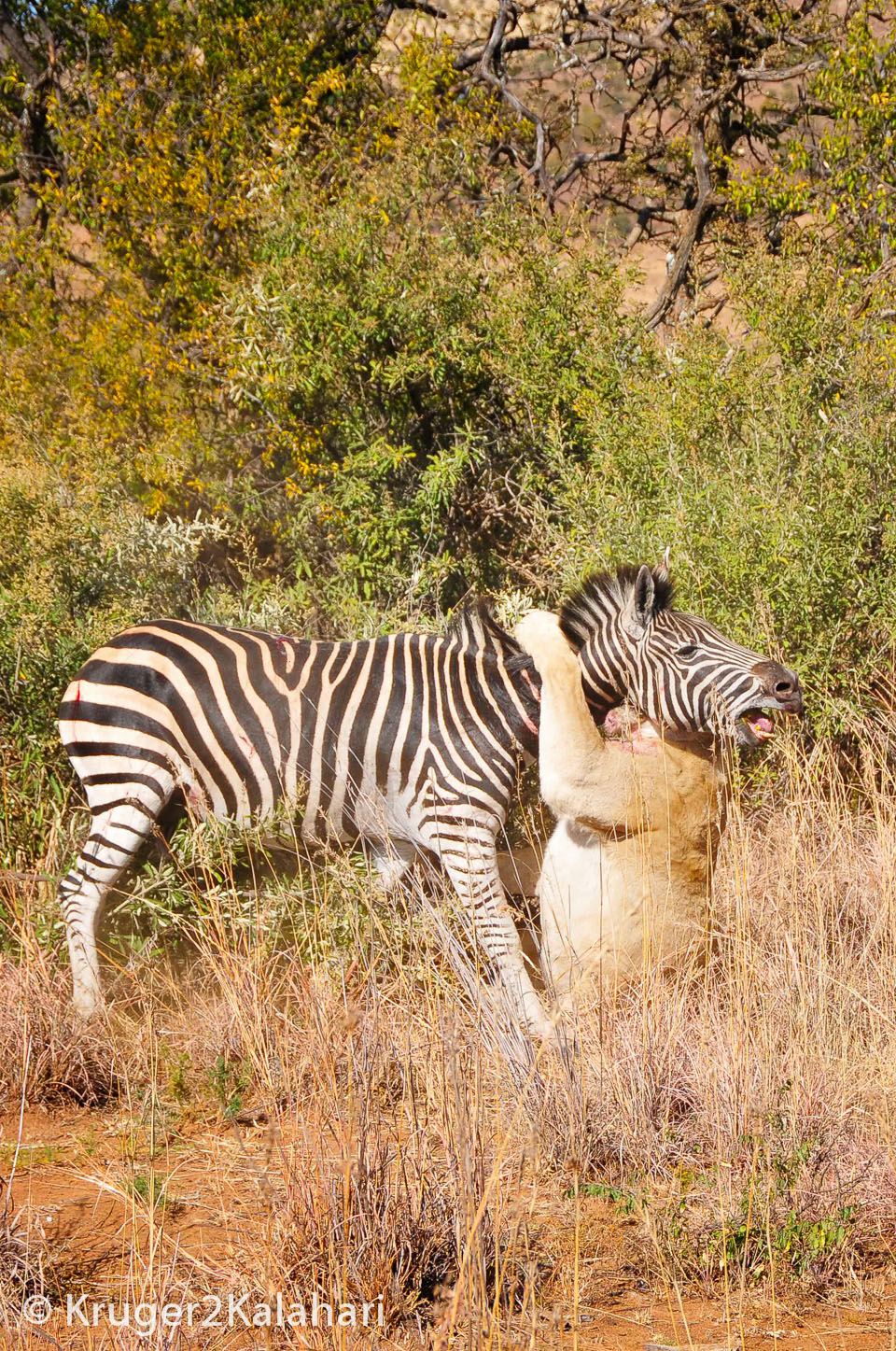 The females do most of the hunting, while the males will help bring down the larger prey like a buffalo or giraffe. Keep a lookout for large herds of animals because the lions tend to follow them around while they are grazing and you may be blessed to see a kill. 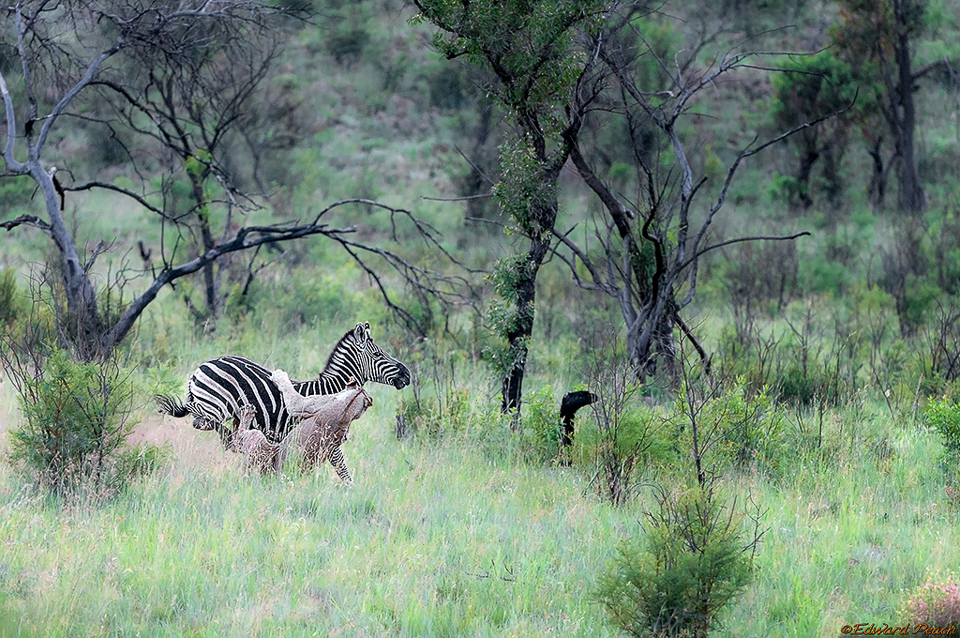 Some other behaviors to watch for are roaring, grooming, spraying (marking territory), sharpening their claws on trees and snarling / aggressive behavior when there's food around... 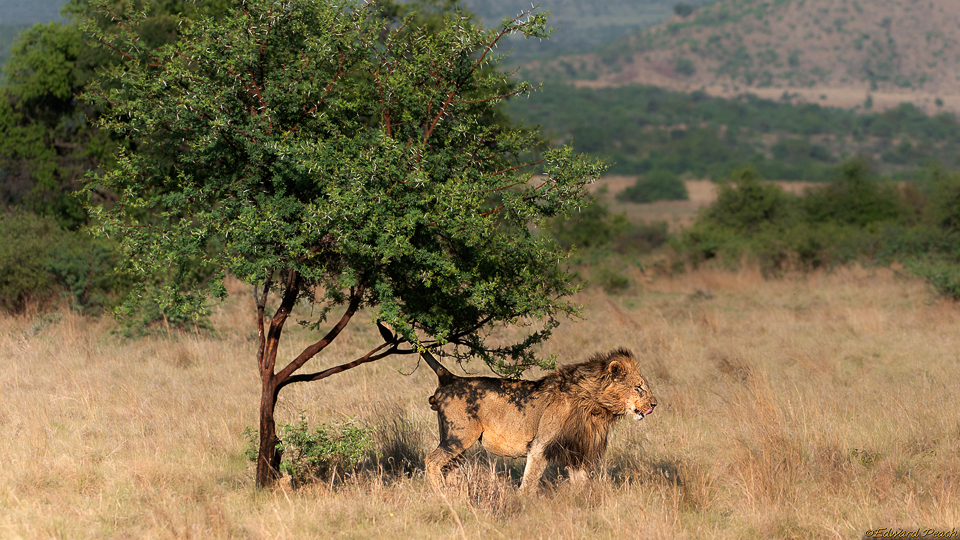 At the kill, keep a watch for individuals that run off with parts of the carcass or even the whole carcass

Mating lions make good photographic subjects as the pair mates a few times per hour and for three or four days. After the action the female turns to swat the male and he tries to avoid the female's claws, which makes for great action shots. 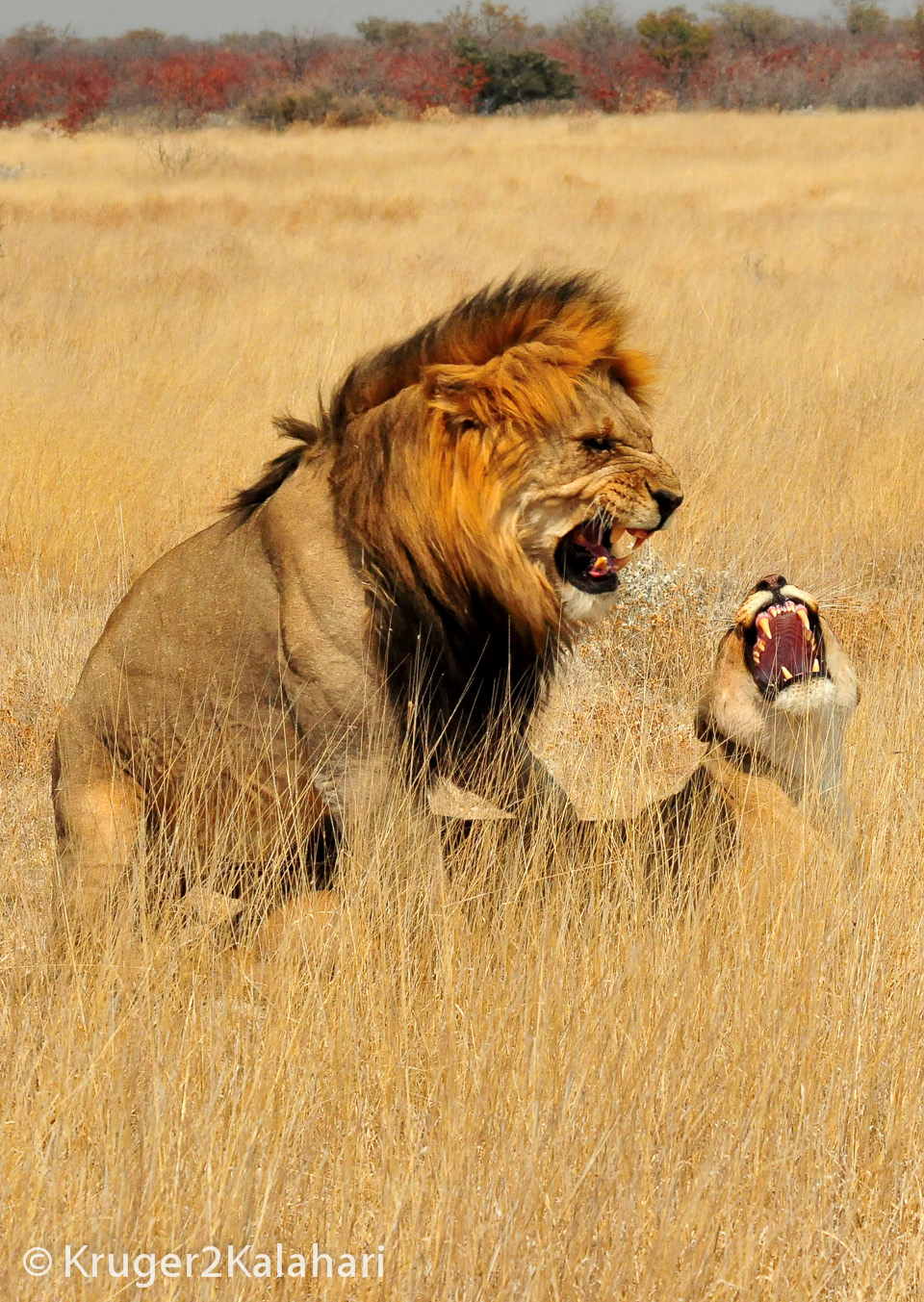 If you come across a pride of lions you will have many subjects to focus on - if there are cubs, try and keep them in your frame as they get up to all kinds of mischief, but make great subjects no matter what they are doing! 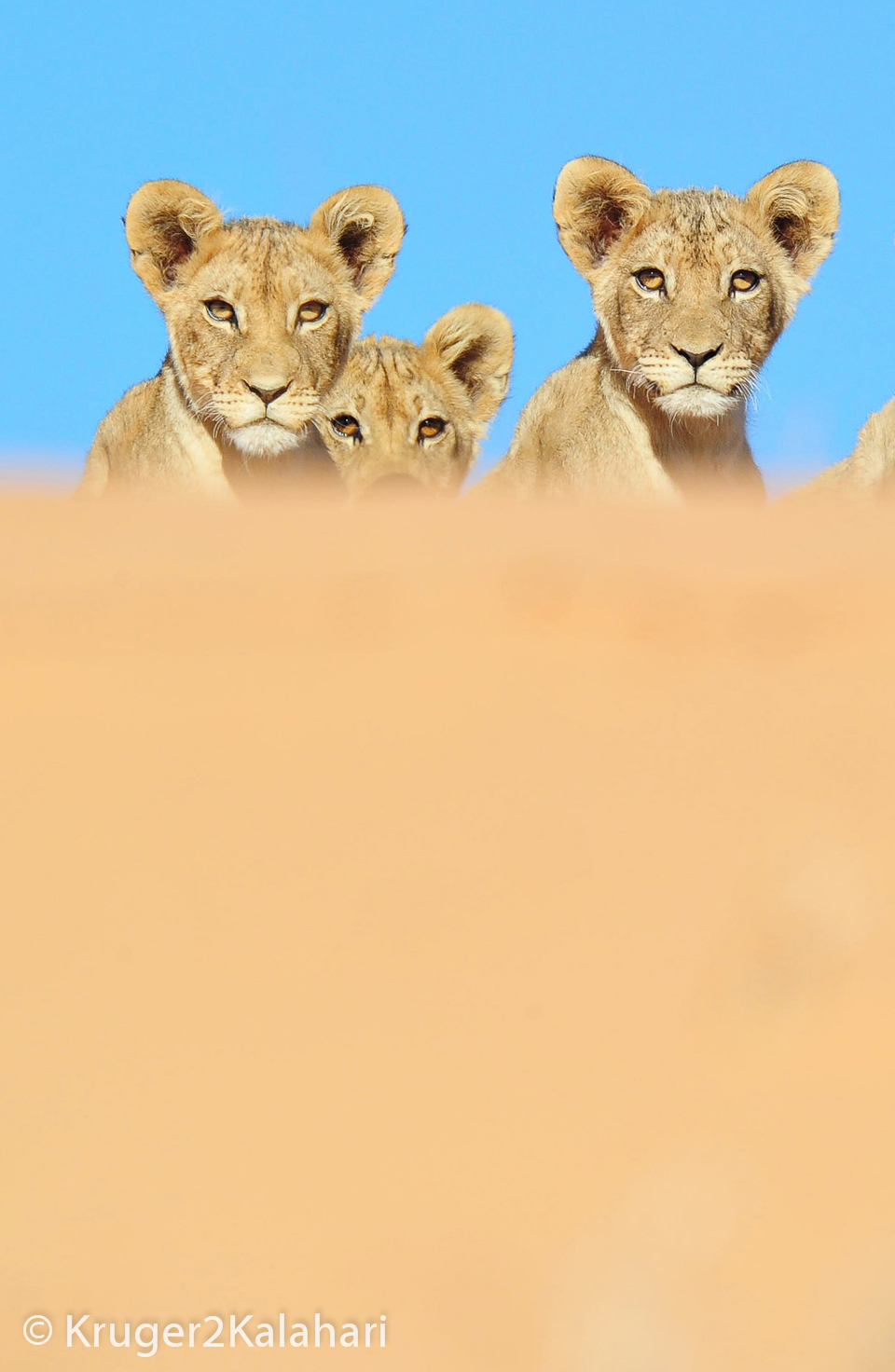 If the lions have had a run-in with a porcupine, they may have porcupine quills sticking out of their faces or body, which also makes for an unusual photo.

If you come across a lion kill you will get the obvious jostling between individual lions but keep a lookout for other animals such as hyenas, jackals and vultures who won't be far away.

Lions normally drink after a meal or after their long siesta, so we tend to stake out waterholes early in the mornings and early evening. 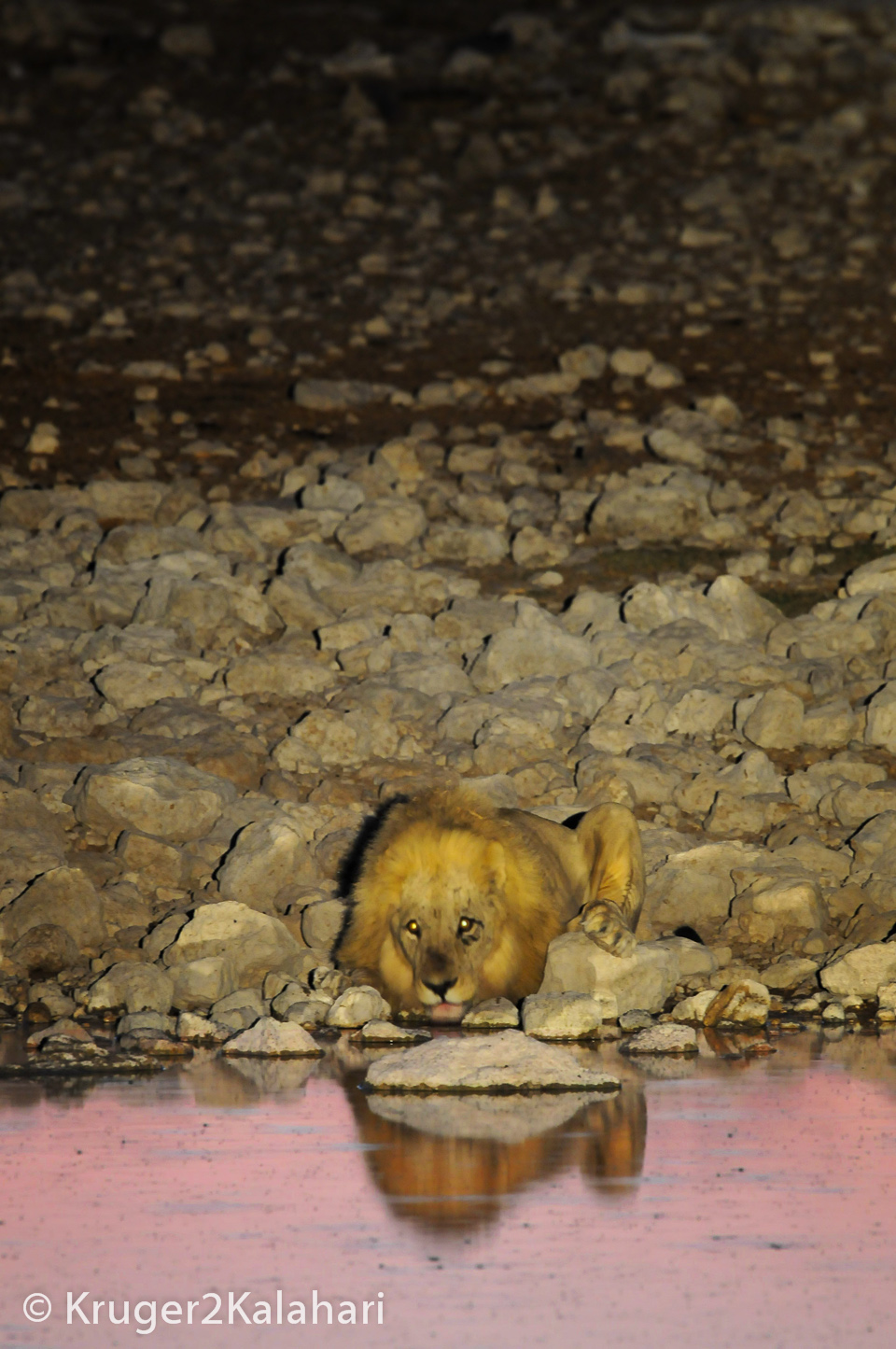 Technically, lions are not difficult to photograph as they are large subjects and they could be in prides providing you with many individuals, so a long lens isn't a necessity unless they are far off.

In terms of exposure lions are middle-tone, so matrix or evaluative metering should provide an accurate exposure but in the Kgalagadi the males tend to have black manes, so if you are shooting tight portraits you may have to dial in matrix/evaluative metering minus about 1/2 stop exposure compensation.

Then there are the rare white lions in the Kruger Park. These individuals can be found around Satara and in the Timbavati. 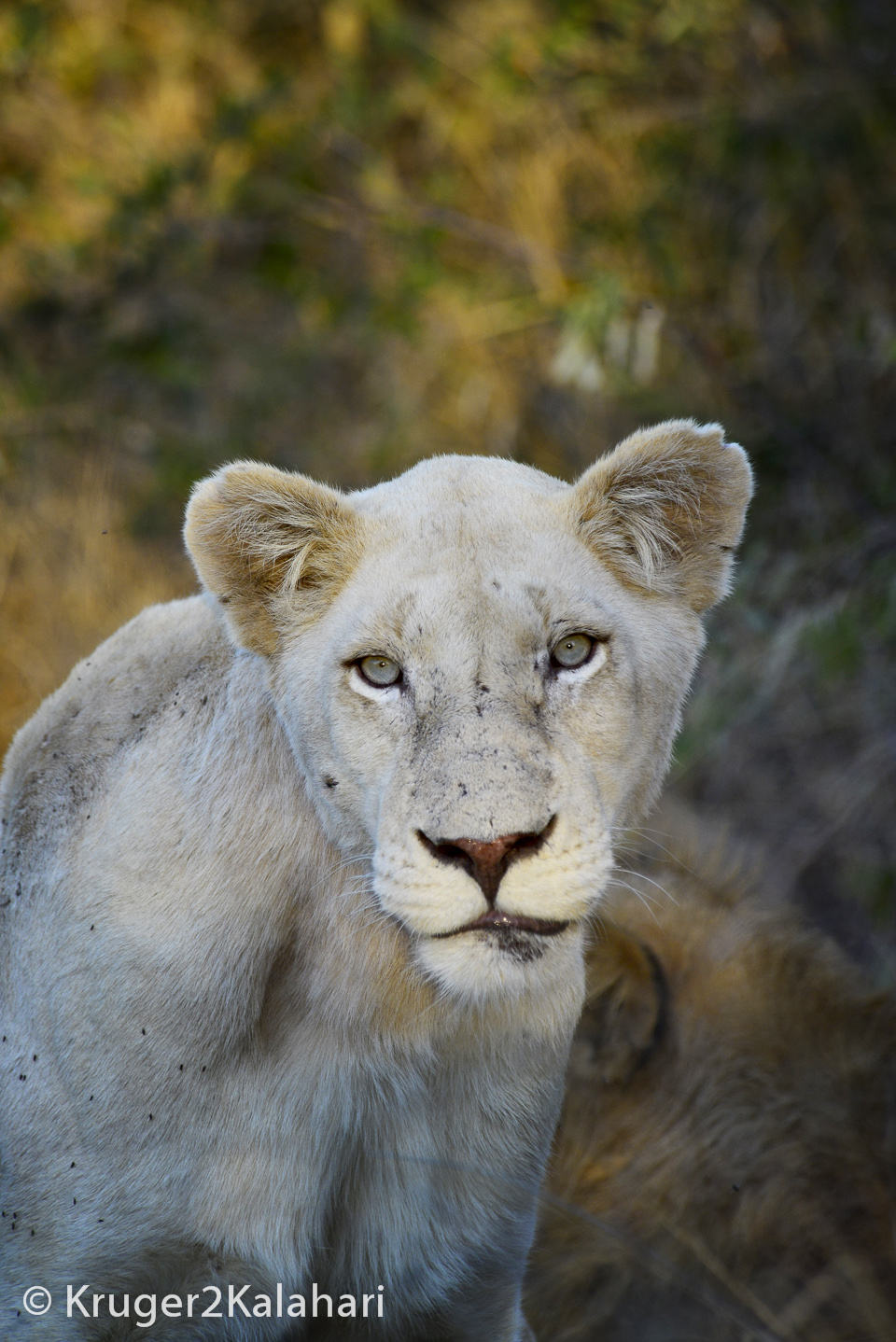