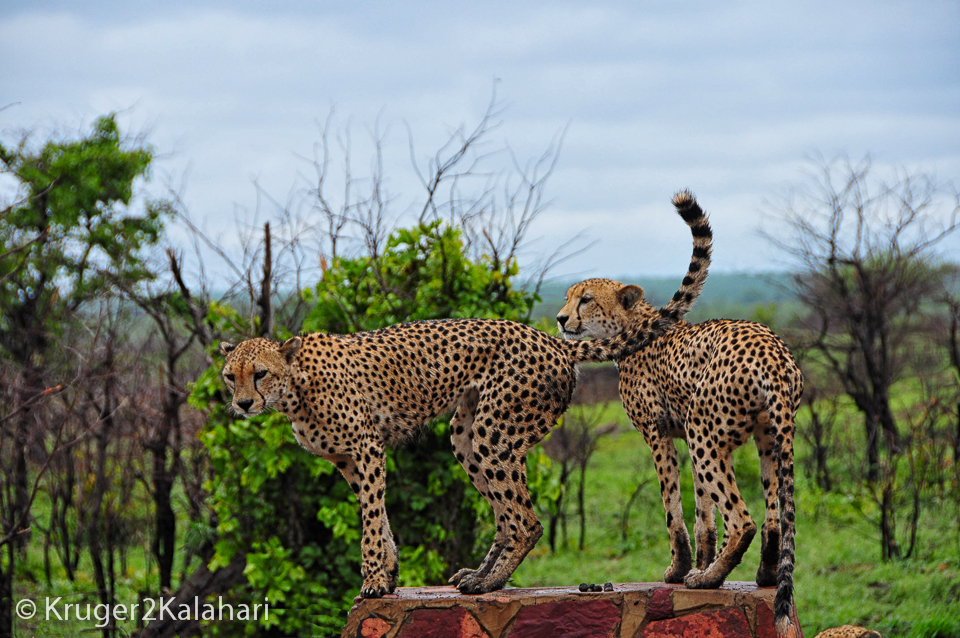 The cheetah, having a slender build, is the fastest land animal in the world and is also the least dangerous of the big cats - I don't think we have ever read of a cheetah killing a human but that does not mean you can get out your car to photograph it when you see one!

The cheetah is one of the ‘super-seven’ animals (big-five plus wild dogs & cheetah) – the seven most sought-after subjects for wildlife photographers in Africa.

Cheetahs are built for speed with their long legs, small head and light-weight bones, they can reach speeds of over 100km per hour in short bursts.

Cheetahs are unable to retract their claws, this helps them when they are chasing prey, they also use their tails like a rudder to help them stay balanced in a chase as they zigzag across the open plains. They are not loud animals but make a bird–like chirp or whistle to call or communicate with one another.

Cheetahs are most active by day but they are the least numerous of the big cats so they tend to be rare sightings. The Kruger park for example has about 200 cheetahs compared with about 2000 lions. The best place to see cheetahs is in the Kgalagadi Transfrontier Park.

If you come across more than one adult cheetah, they will most likely be brothers because they often stay together so they can hunt larger prey. The females tend to be solitary cats, except when they have young cubs.

You can use the sightings boards, sighting books, sighting apps, speak to field guides and other guests or try to find them yourself.

Cheetahs are found throughout Kruger but mainly in the south. We have had good sightings around Crocodile Bridge, along the Doispan and Napi roads, around Tshokwane and around Satara. We have seen them as far north as Punda Maria but very seldom.

In the Pilanesberg, the area around Lake Mankwe is a good place to find them.

In the Kalahari we see them along both the Auob and Nossob roads and we have also seen them on the small dune road. The Kgalagadi is where we have had most of our Cheetah sightings with one cheetah kill each trip!

In Etosha they are normally found on the Halali plains near Halali camp and Salvadora and Sueda waterholes. We have also seen cheetah at Springbokfontein and at the Dolomite camp waterhole.

There are only a few cheetahs in Madikwe but they are seen often as the park is not large.

The one year we saw on the Kruger Sightings app that we missed the cheetahs on a flat rock on the S7 road near Pretoriuskop camp at sunset. We decided to go past the rocks at sunset the next day and there they were again - it's worth going back to the same spot the next day! 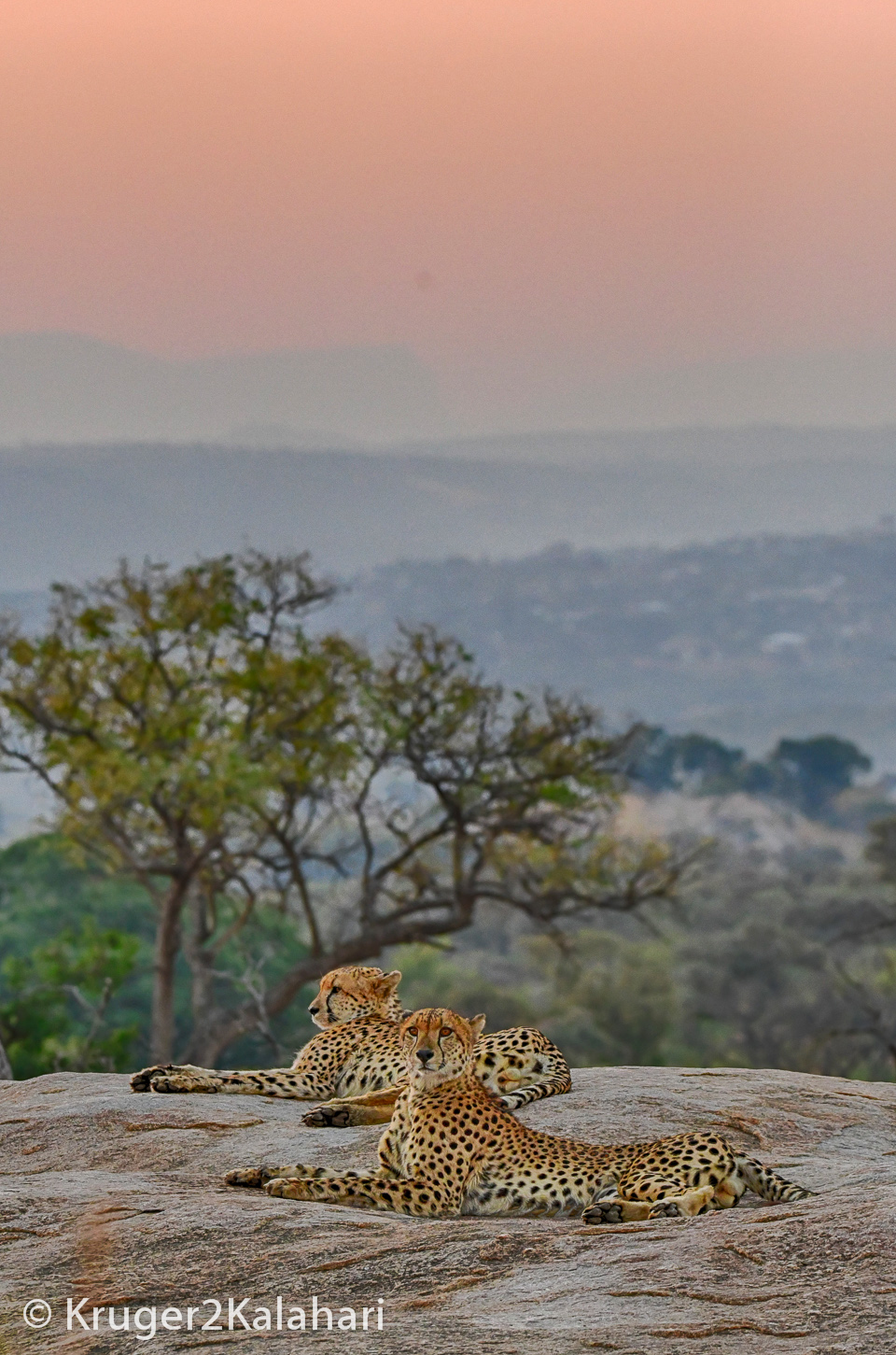 Cheetahs tend to drink early in the mornings and we have been blessed with a number of Cheetahs drinking. Our first one was at Tierkop waterhole in the Kalahari where the waterhole was surrounded by yellow Devil's Thorn flowers. Then we got mom and two large cubs drinking right in front of our dune cabin at Urikaruus wilderness camp. The lighting was great, and we even got their reflections in the water.

With Cheetahs being lightweight predators, they usually go for the smaller antelope or buck such as the Springbok, Impala, young gnus or zebras. They will often hunt at mid-morning to midday when it is less likely for a lion to steal their kill.

Cheetah prefer to hunt on the open plains because of their speed they need the uncluttered landscape, which for photographers is great.

You can get a nice clear shot of a full-on sprint depending which park you are in. We have had great shots in the Kalahari of Cheetahs chasing down and killing a Springbok right outside our cabin at Urikaruus. 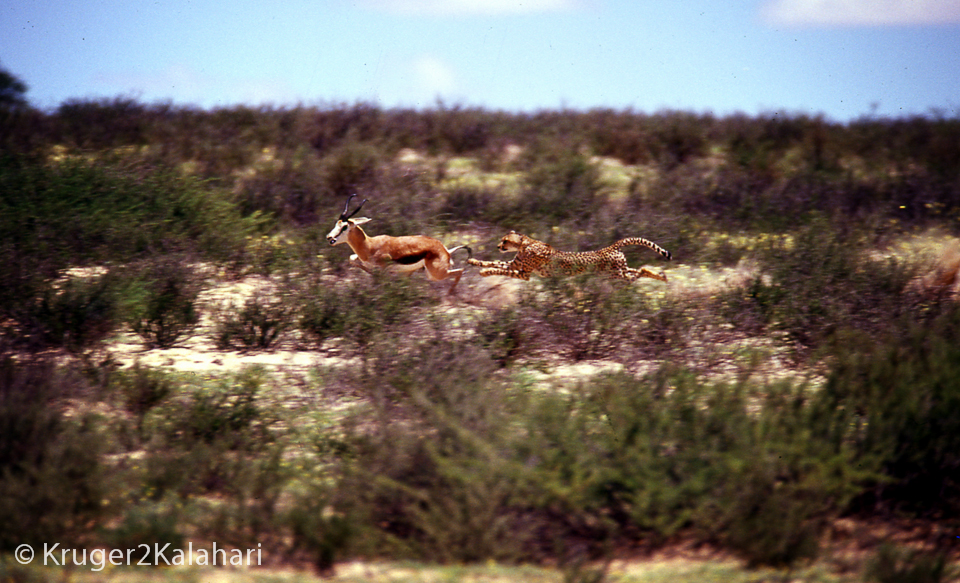 We have also had a full chase and kill in the lower Nossob area, with no obstructions in the photograph. The challenge comes when trying to get that in the Kruger with all the bush, but it is do able and if you know where to look and find the Cheetahs then you have won half the battle.

Keeping up with the chasing is another challenge as the Cheetah is so fast you need to be one step ahead and have the correct camera settings.

If you are hand holding then put your VR / IS on to compensate for your movements and I would suggest zooming out for the chase as you do not want half a Cheetah in your photograph - rather have the full chase with dust and all, this gives your photo impact and not just another picture of a cat. You need to also ensure that your shutter speed is at least 1/2000 sec otherwise you risk having blurred images.

The killing is always the hardest for me to photograph because it is always such a power struggle to the end with the prey on the losing end... most times. The killer bite to the throat kills the prey within minutes and then the Cheetah has to wait to catch its breath and to cool down.

It's still not over as the Cheetah, after it has caught its breath, will drag the carcass to a spot where it can eat in peace and you can get some really great shots. It will usually drag its prey under a tree or bush and this is when you may have to use your flash to fill in the shadows if you are close enough. 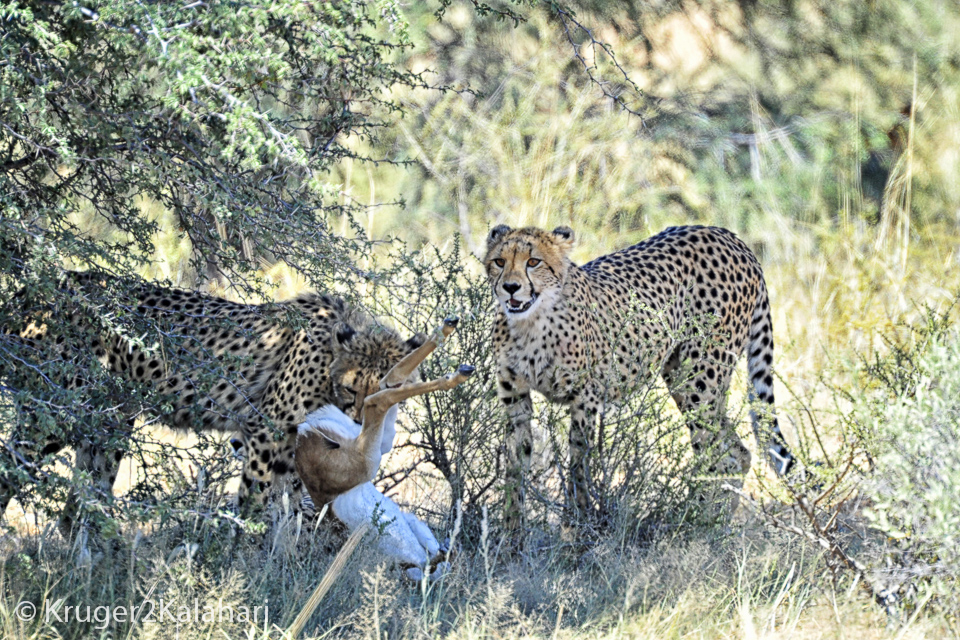 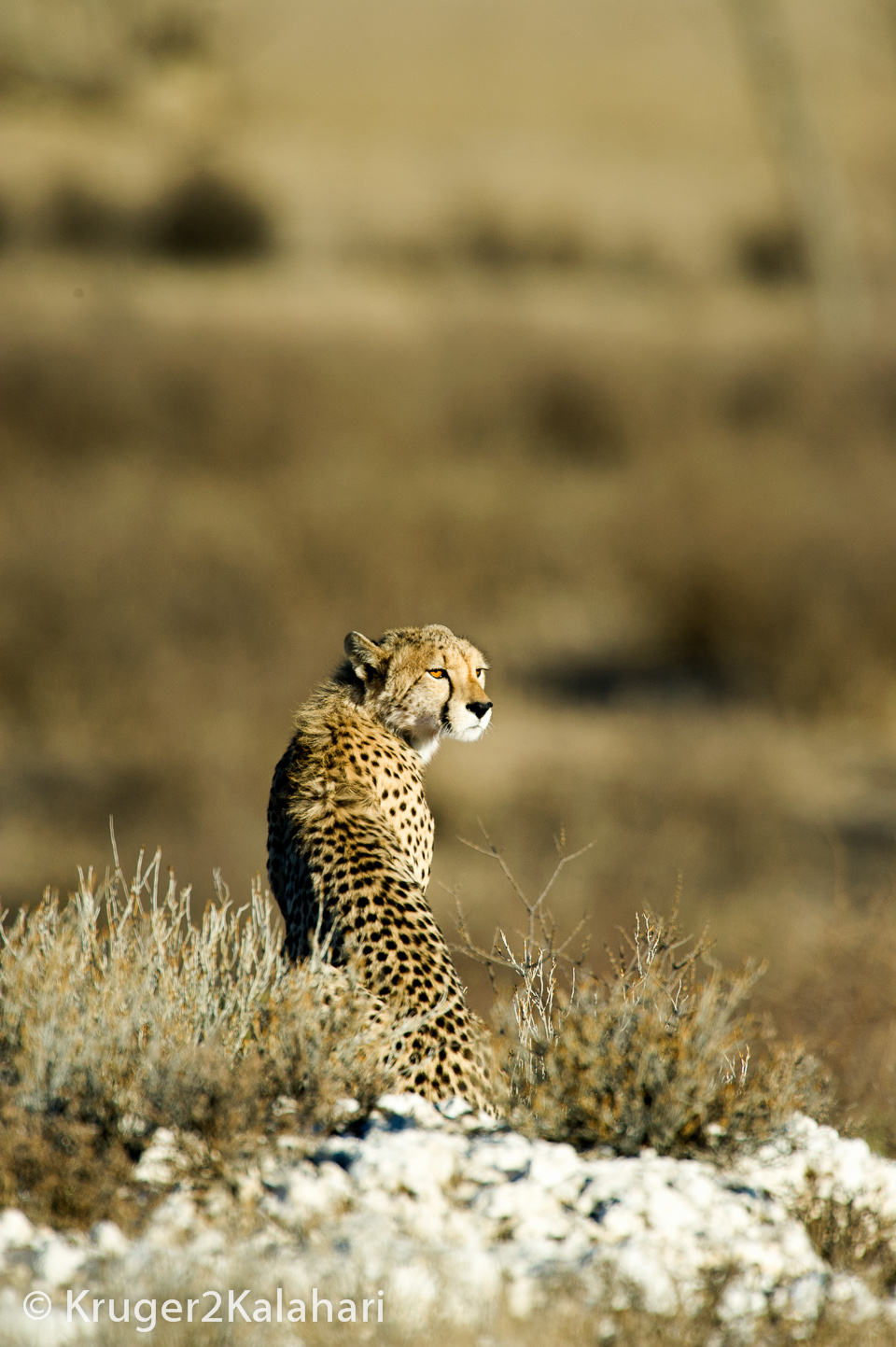 Cheetah on top of calcrete cliff in Kgalagadi

If you find a Cheetah near a vantage point stay with it, you may get some great action shots of it jumping up or off the object. 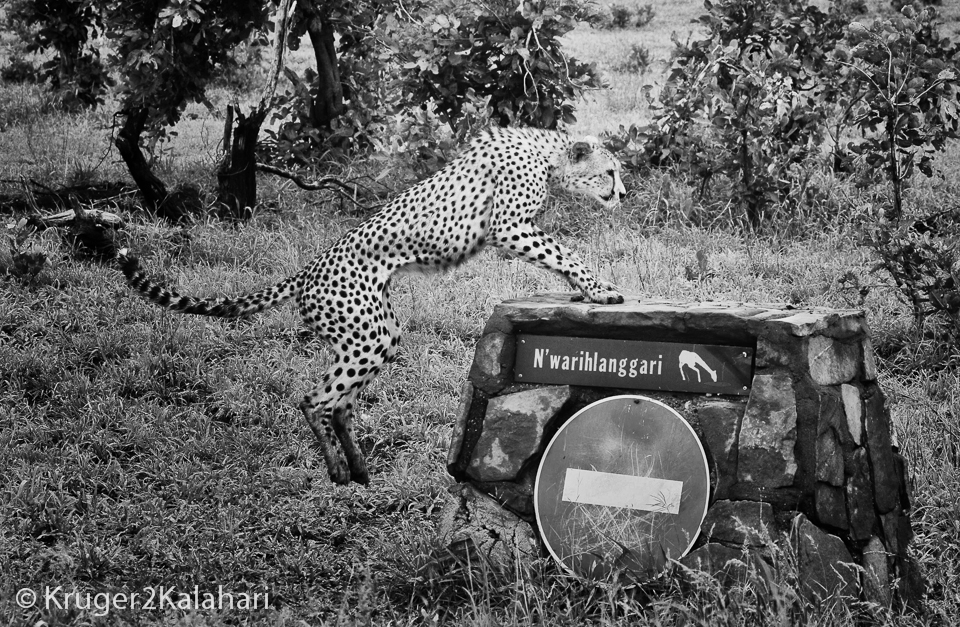 Cheetahs also use these spots to mark their territory by spraying. 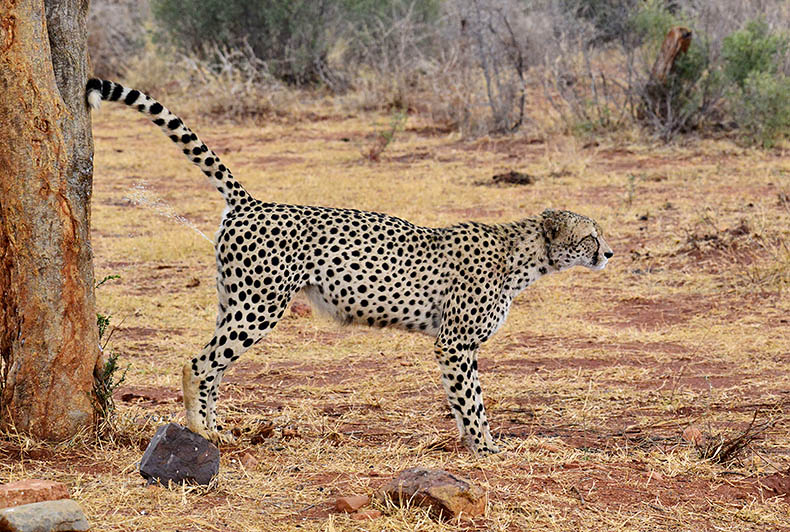 Watch for dung, either in the road or on signs as the cheetahs tend to bend down to sniff the dung or urine...

Cheetah mothers have between two to five cubs in a litter which they hide in long grass or thick bush while she is on a hunt. Once she has made the kill she will then call her cubs and take them to eat.

The cubs make great photographic subjects because this is when mother and cubs will interact with each other and after the meal will groom each other. 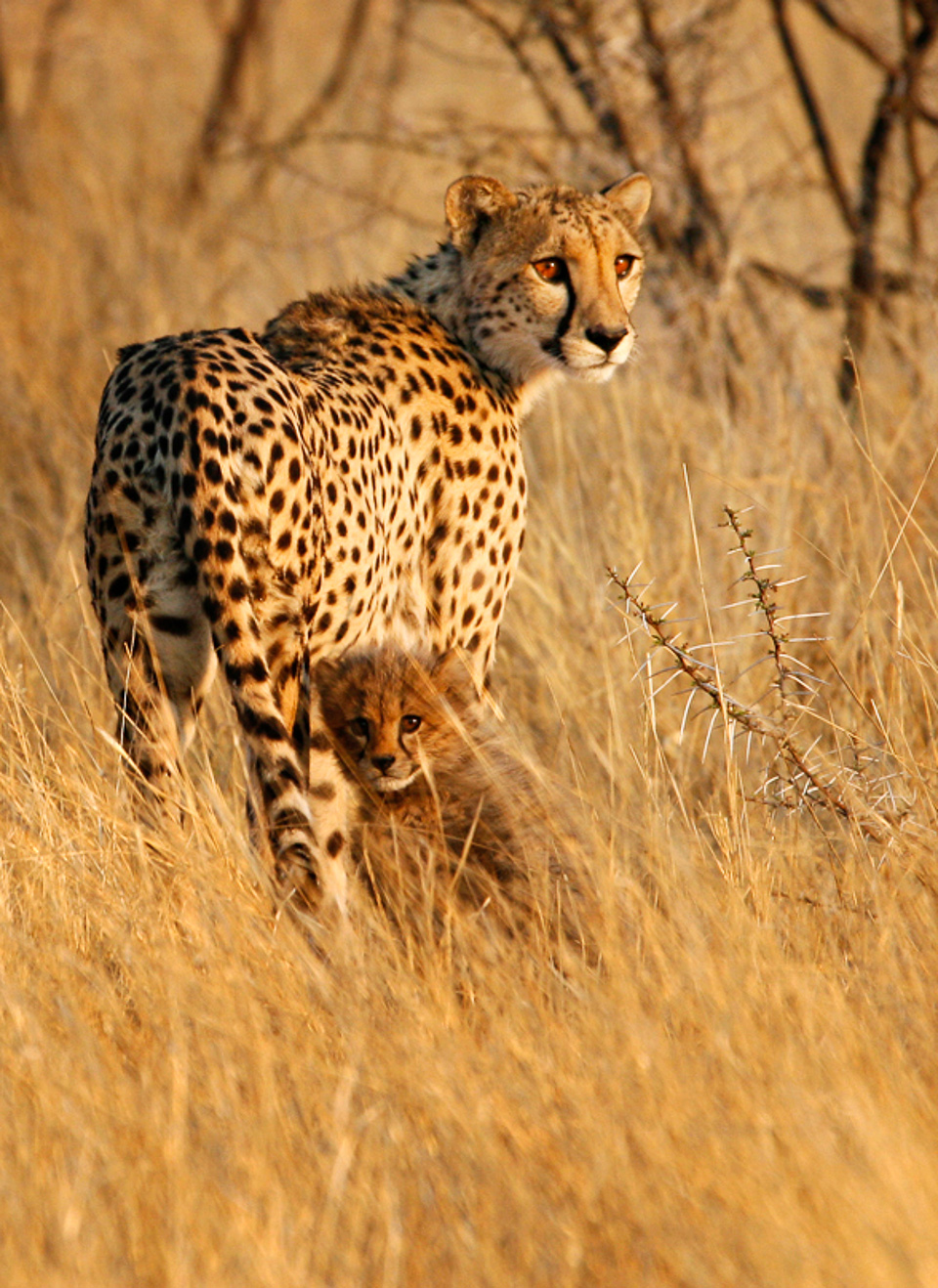 If there's more than one cub they will chase each other and play around... 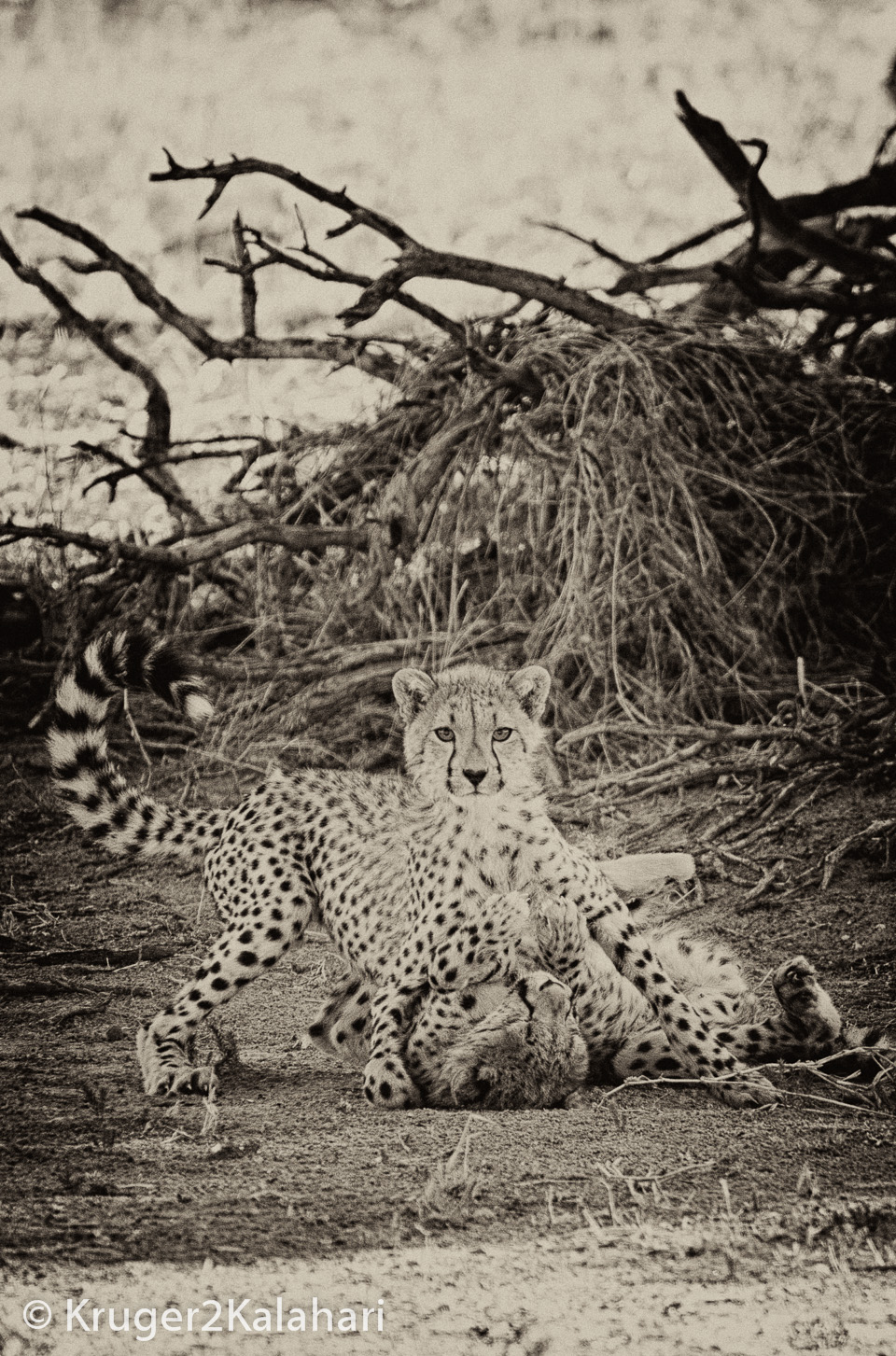 They may then play and chase one another round and you will be able to get some great action shots in hopefully good lighting. When the cubs are a little older the mother Cheetah will teach them how to hunt by bringing them small live prey which they will use to try out their hunting skills.

Try and get low-angle photos of the cheetahs. This is not easy when on a self-drive safari but when we stayed at Makanyane Lodge in Madikwe, we went on a walk and came across the cheetah brothers.

The field guide was excellent and allowed me to get close and lie on my stomach to get these shots...

In terms of exposure, the black dots could have caused your camera to over-expose the picture but today's modern matrix metering tends to be accurate and we don't need to dial in any exposure compensation when shooting cheetahs.

We try and photograph cheetahs early morning or late afternoon with front-light as this makes their eyes glow deep orange. 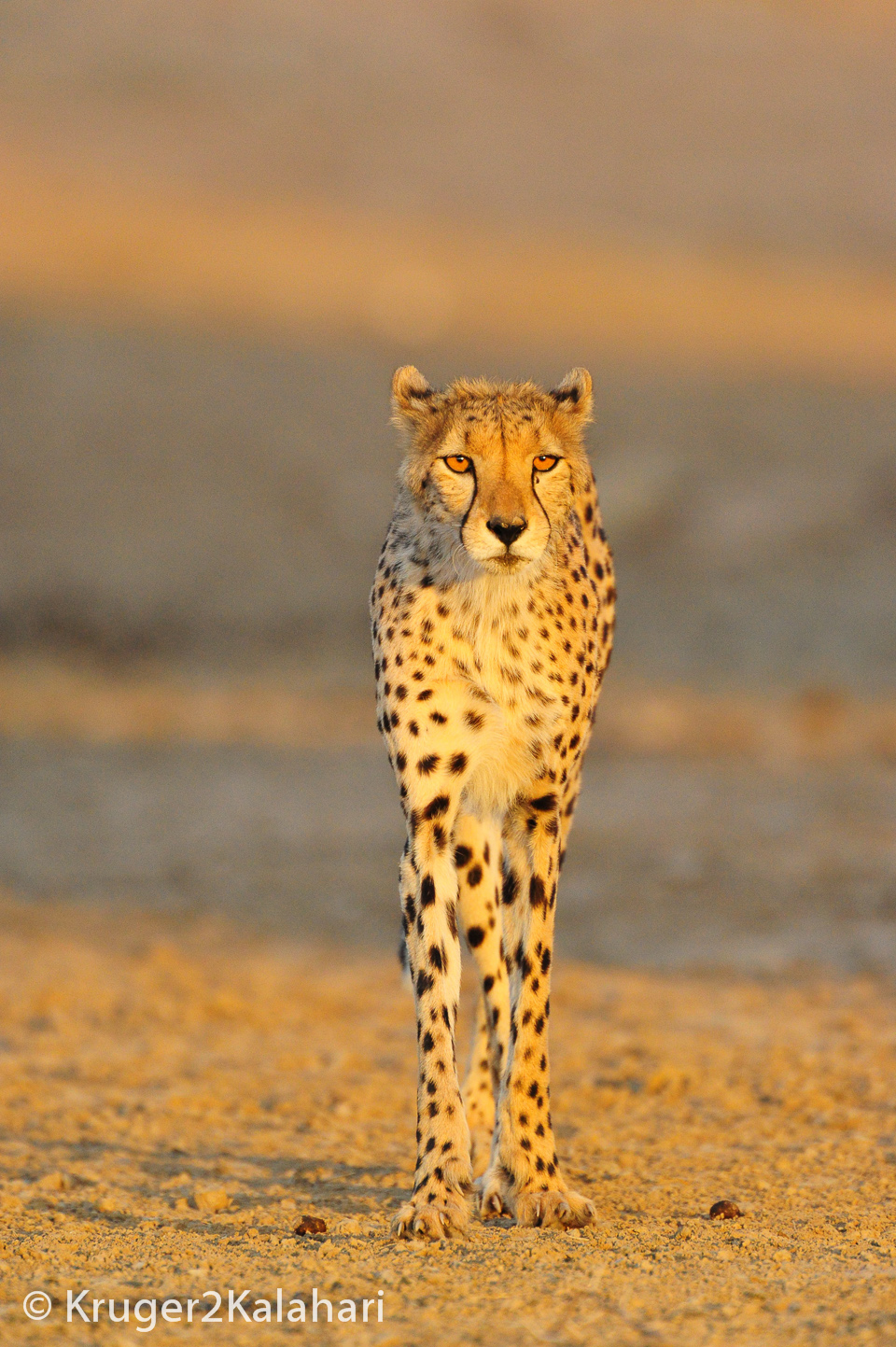 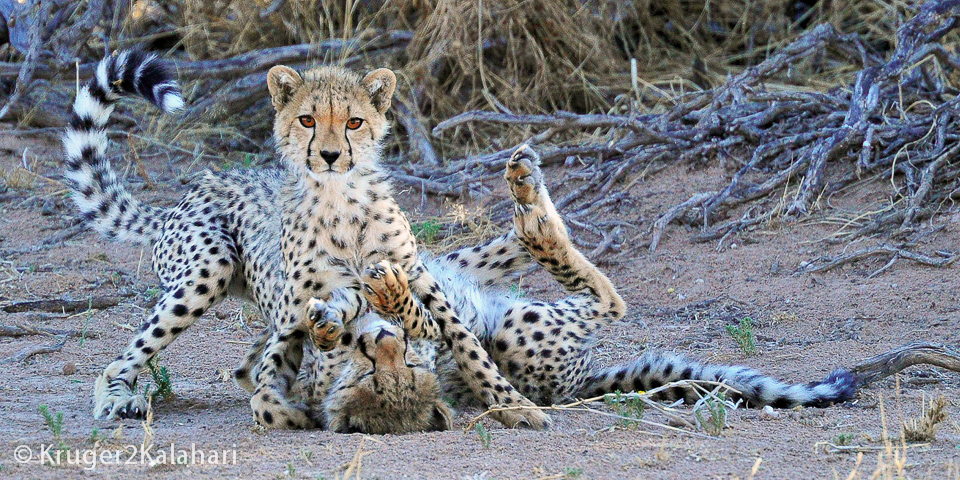