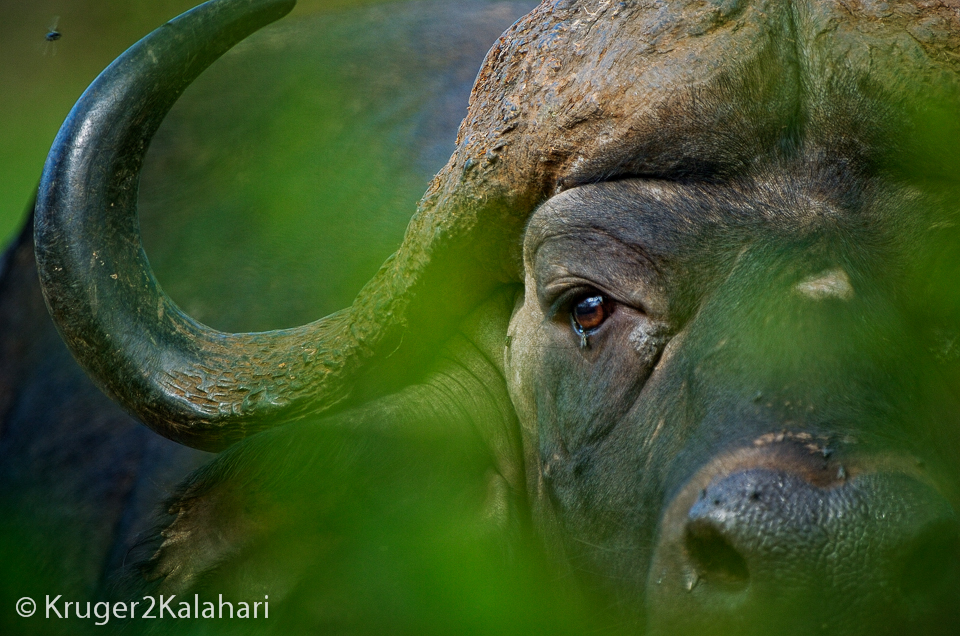 The Cape Buffalo  is one of Africa's 'Big-5 animals'  and  has the reputation of being one of the most dangerous animals in Africa.

The buffalo is a placid animal but if it is cornered or wounded, its first instinct is to attack.

Buffalo are common throughout the Kruger Park, can be seen on most trips to Madikwe, are a very rare sighting in the Pilanesberg and are not found in Etosha or the Kgalagadi.

The biggest herd we saw was at the Mlondozi dam from the picnic site. This herd was huge and numbered at least 2000. We watched them coming down to drink and they just kept coming - the whole area was covered with black dots that looked like ants. 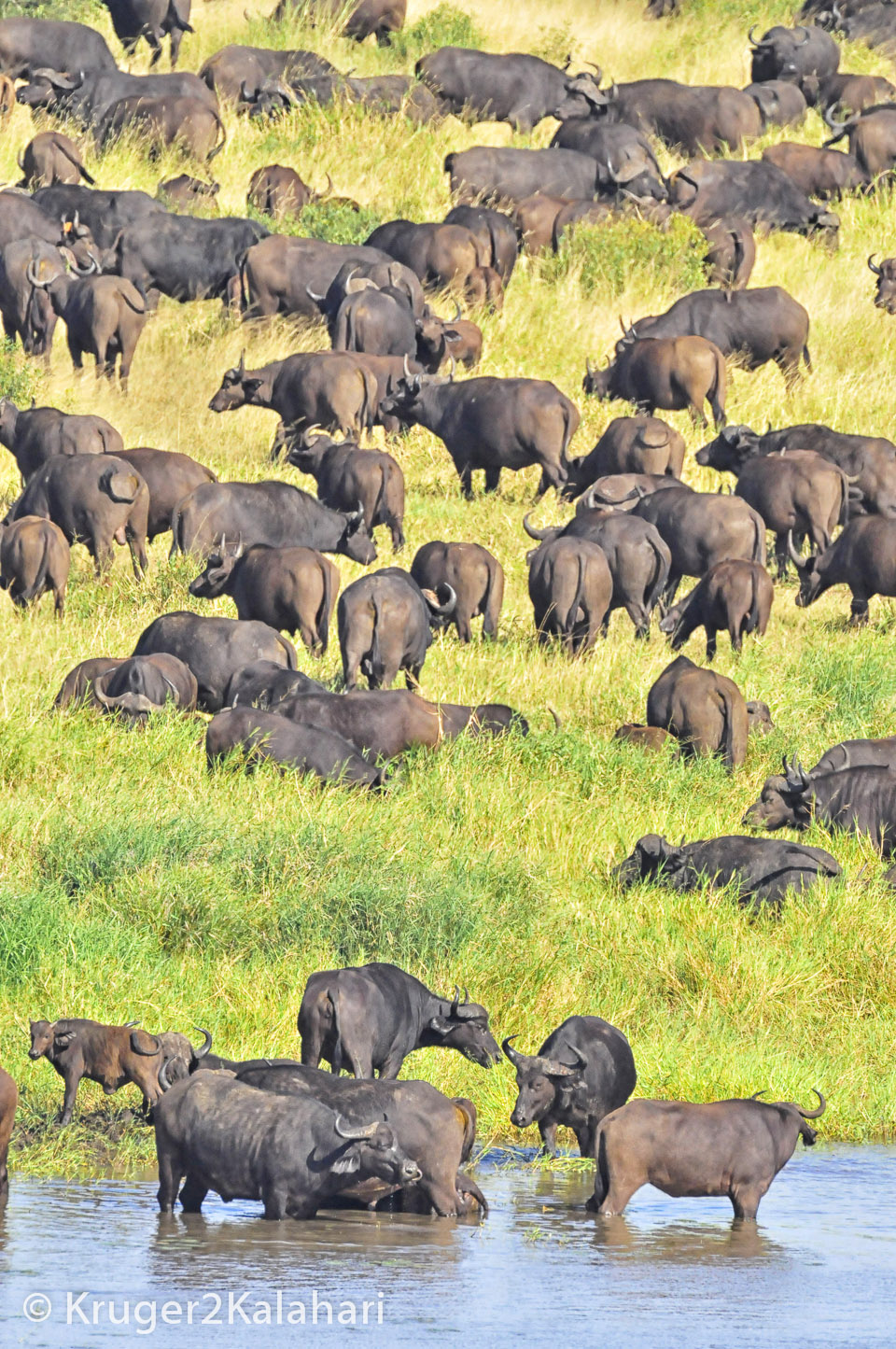 Like the Elephant, buffalo love mud wallows and you will often find them lying in mud, which helps to cool them down and it also helps with ticks.

Buffalos need to drink daily, so you will encounter them either on their way to or leaving a waterhole or river. Buffalo like to go to the water to cool off when they drink and it looks like they are bathing.

Buffalo are exclusively grazers and like to feed on the tall coarse grass, this way they open grassland for the animals that prefer to eat the shorter grass. Buffalo can often be seen between the mopani trees as they move around grazing.

This can make great photographs in autumn and winter when the leaves of the mopani tree change color, and you get the great contrast of the dark buffalo against the colorful trees. 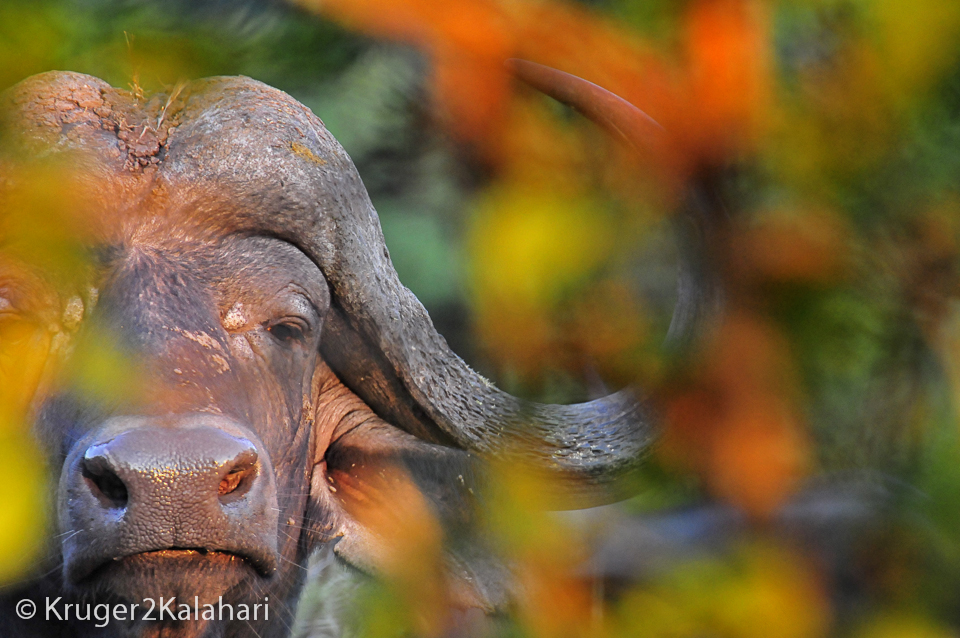 Oxpeckers love buffalo and tend to choose one and then run over his body and head, checking out the ears, nose and eyes for parasites after which the oxpecker flies to the next buffalo.

This can make for great photographs - a buffalo with an oxpecker sitting on his boss or hanging off his ear adds interest to the photograph.

Older bulls will leave the breeding herd and form bachelor groups of 3 or more individuals. These guys are often found along the rivers as they like to lie in the sand.

Buffalo sometimes have 'headgear' - mud-capped heads or branches sticking out from under their horns, this is so funny to watch and you can get some great photographs of individuals displaying their different 'headgear'. 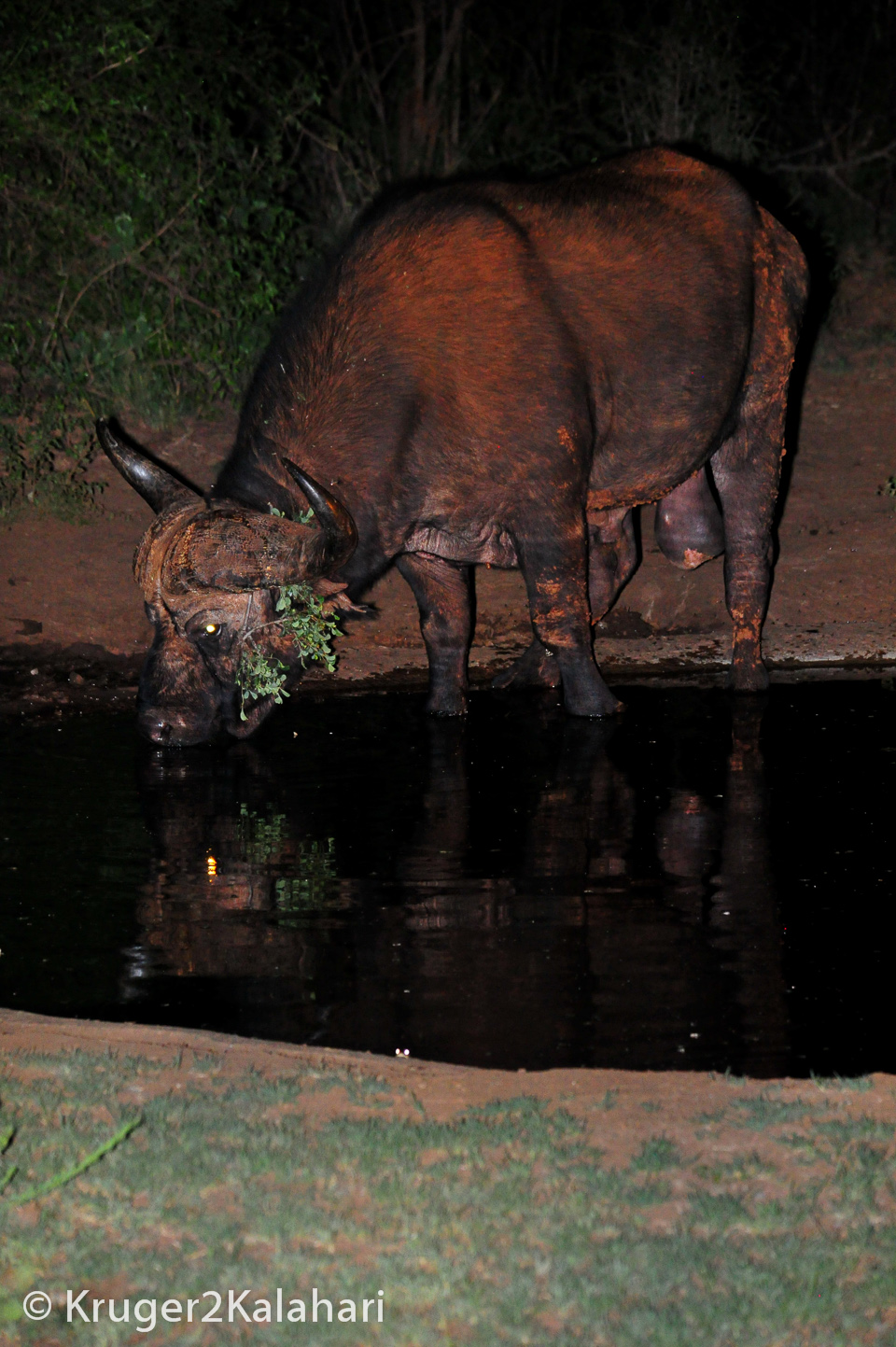 Buffalos are usually wary of cars so they tend to stand behind thick bushes or run when they see you, or they are simply curious and will stand staring at you...

We have also spent a great deal of time sitting with a herd and photographing the different faces, even giving them names - this is when you get to see the different personalities in a herd.

Look for unusual horns, facial markings and comical faces. These seven faces (reminds me of the 7 dwarfs) were all in the same herd... 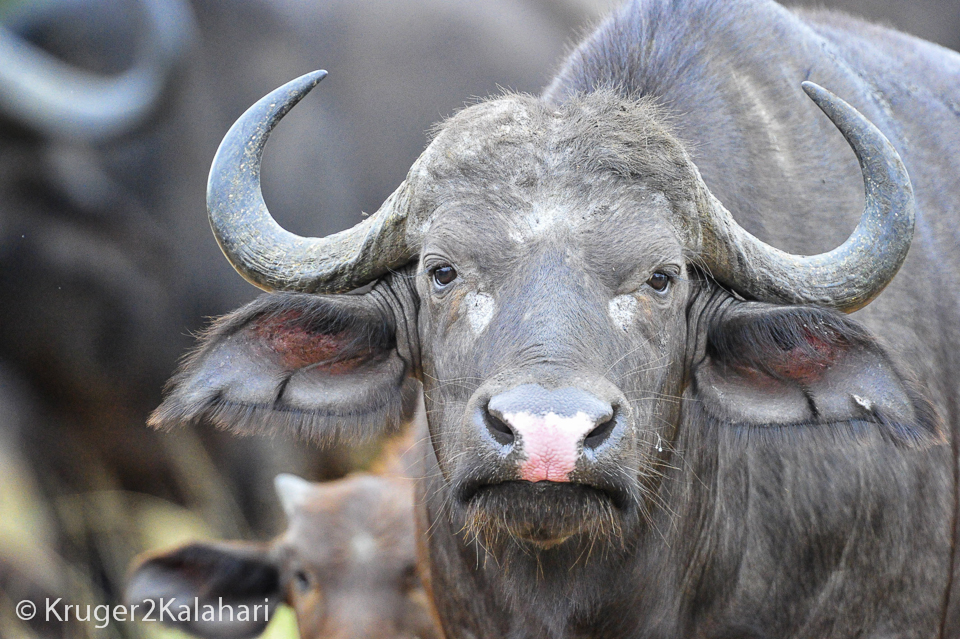 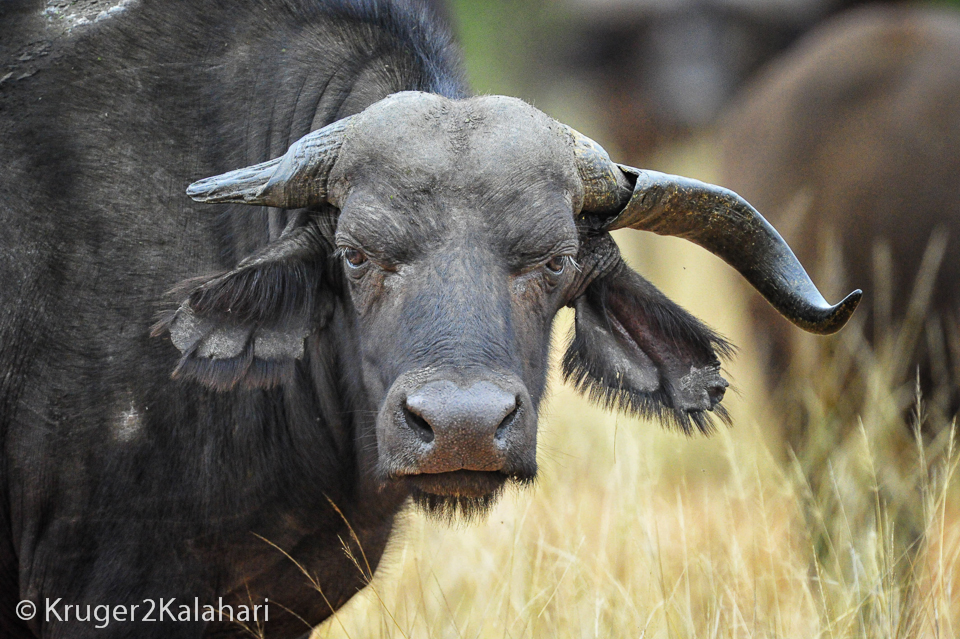 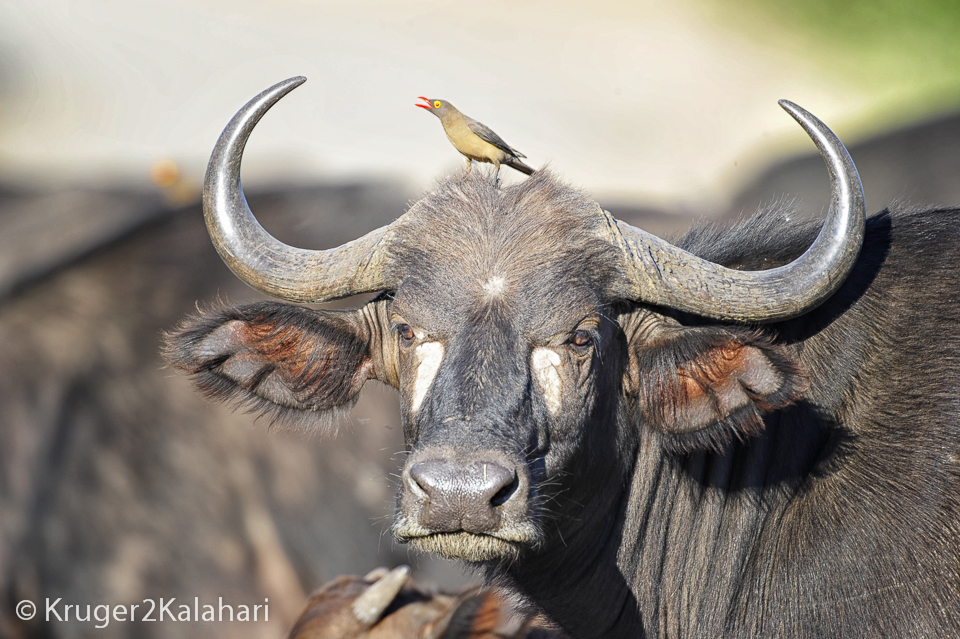 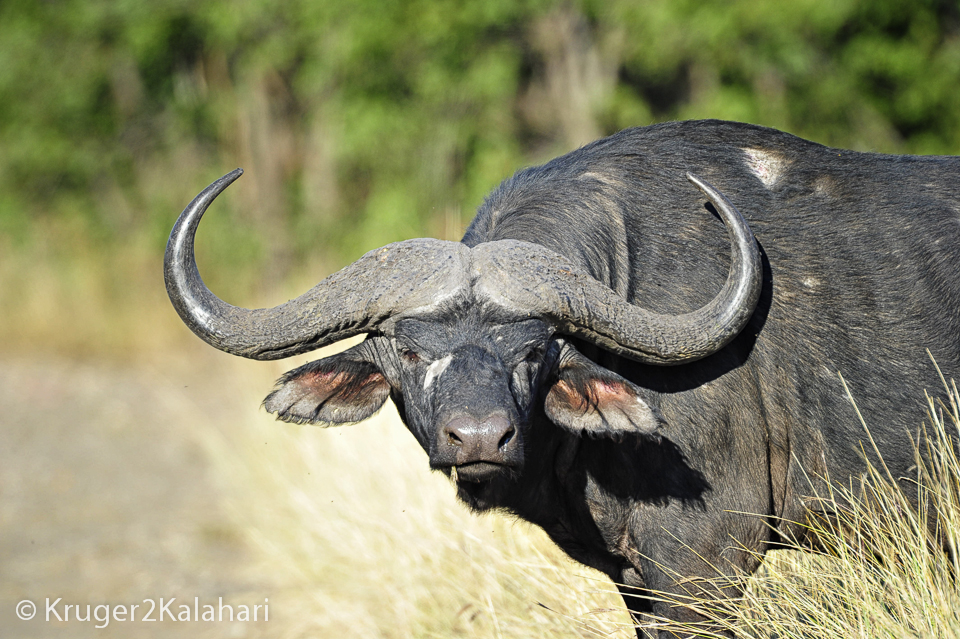 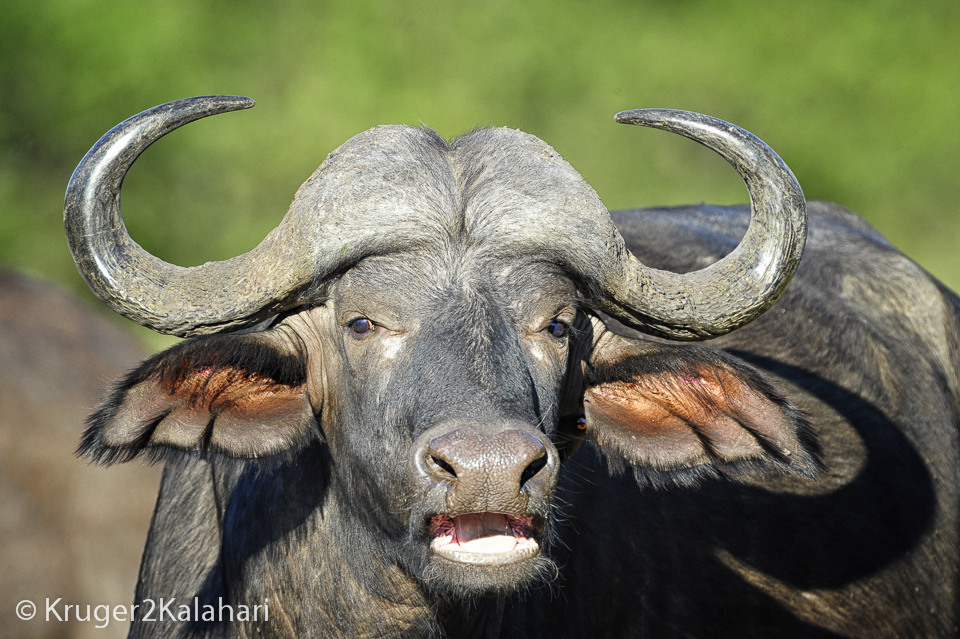 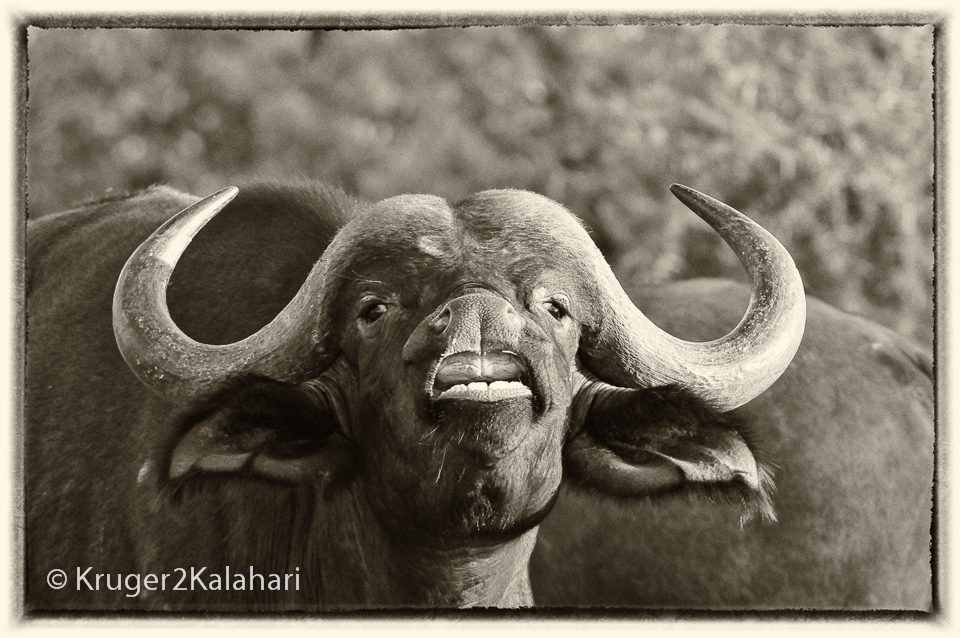 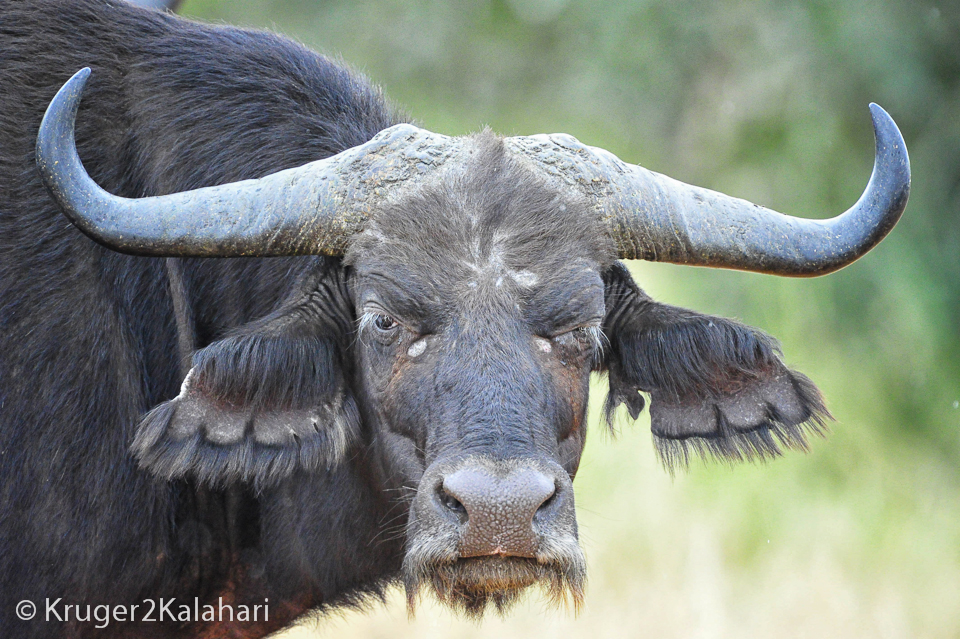 Buffalos are very photogenic but getting the right exposure can be a challenge as they are very dark.

Try photographing buffalo in early morning or late afternoon light as this is the best time to get even tones and details of the animal.

We tend to spot-meter off the buffalo and then tweak the exposure later in post-processing if needed.

Alternatively you can try to obtain low-key or high-key images. Low-key will be best when the subject is in the light (either sunlight of flash light) against a dark shadow background... 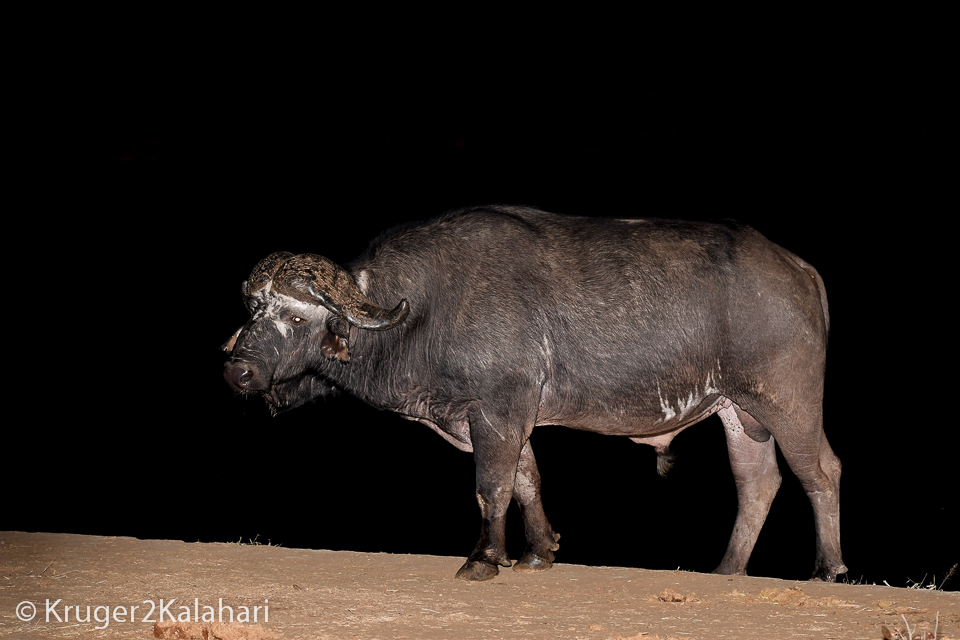 while high-key images are best when the subject is dark against a light background like dust... 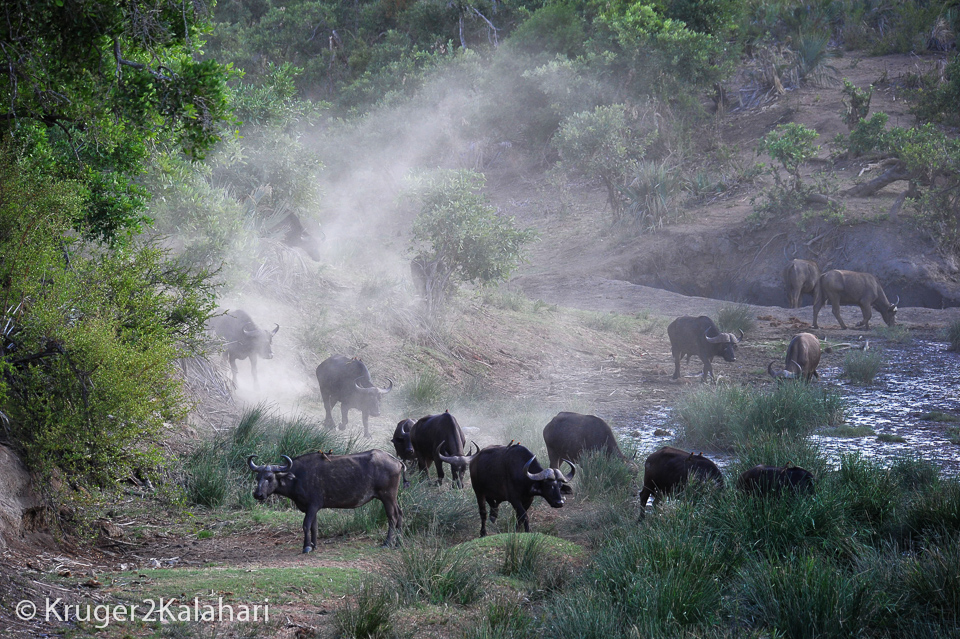 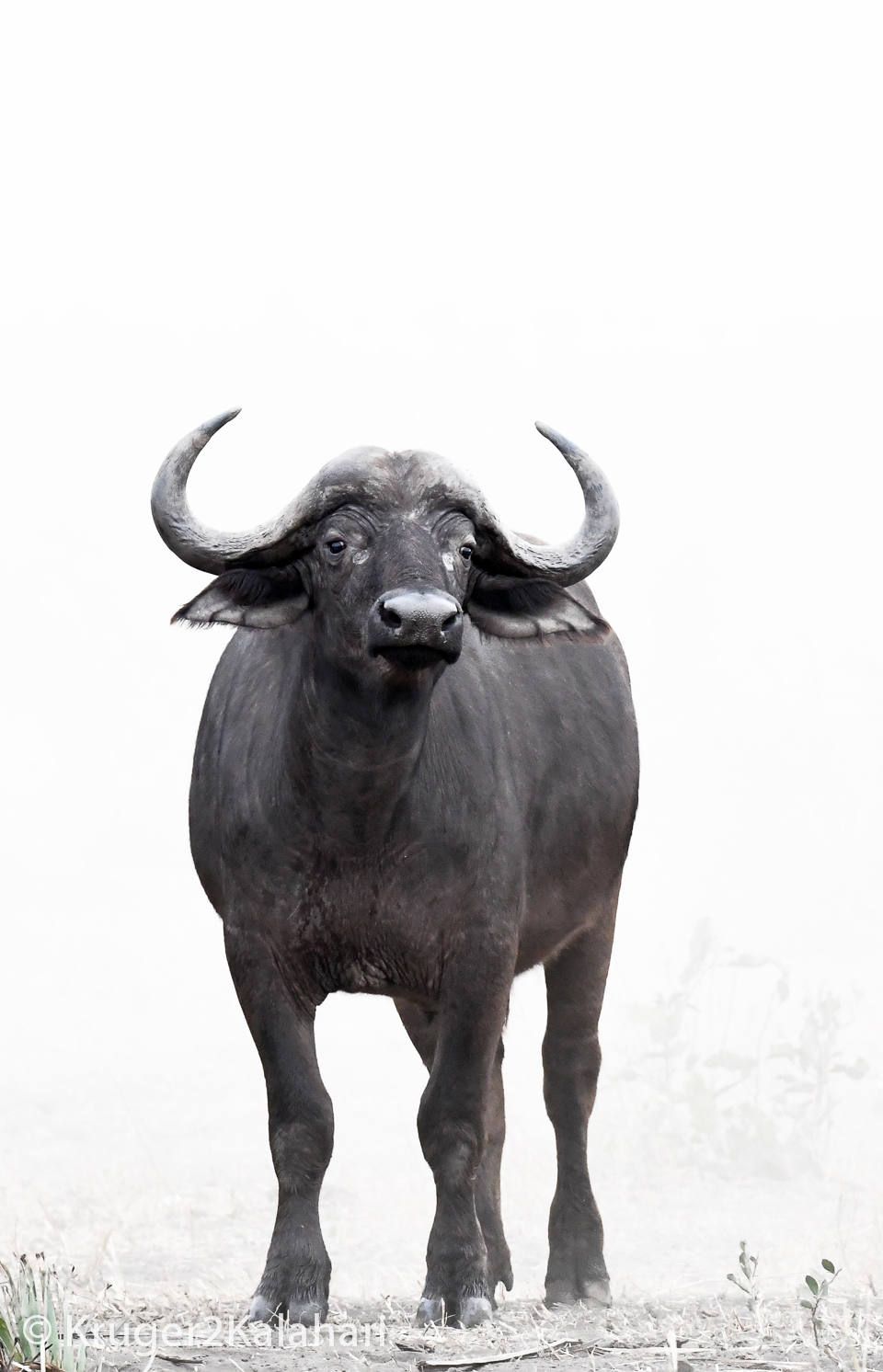 High-key buffalo. This effect is achieved by spot metering off the dark subject when it is against a very light or bright background. In this case the buffalo was standing in front of a huge white dust cloud that the rest of the herd had kicked up at Boyela waterhole.

If the light is harsh, say at midday, then simply convert the image to Black & White... 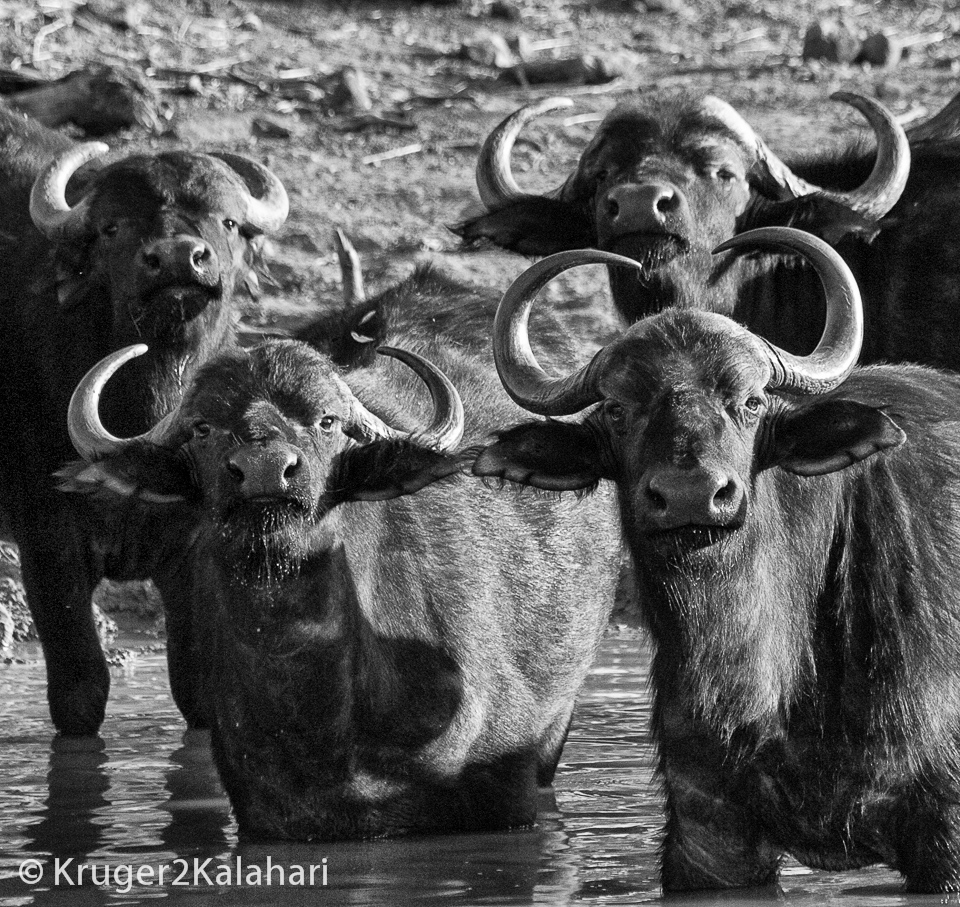 Buffalos are such a rare sighting in the Pilanesberg, so if we see them at midday when the sun is harsh we still shoot as we may never see them again! 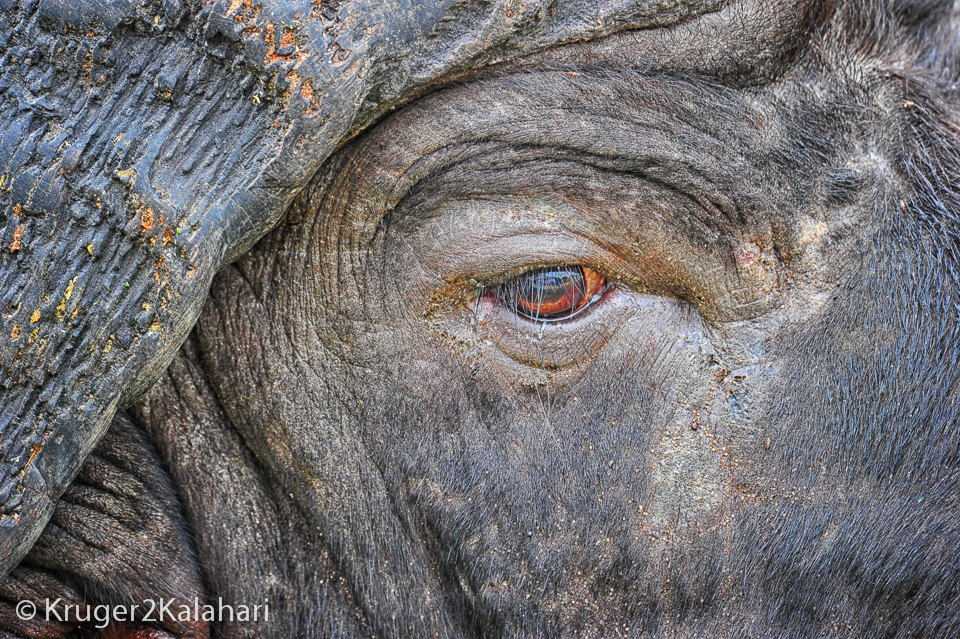 The photos in this Buffalo gallery were all captured in the wild in some of Africa's best national parks and wildlife reserves, namely the Kruger National Park, the Pilanesberg Game Reserve and Madikwe Game Reserve.

And keep in mind that there is always the chance that predators could be in the vicinity of the buffalo. So many guests race past prey animals like impala, buffalo, giraffe etc. yet these are magnets for the predators. 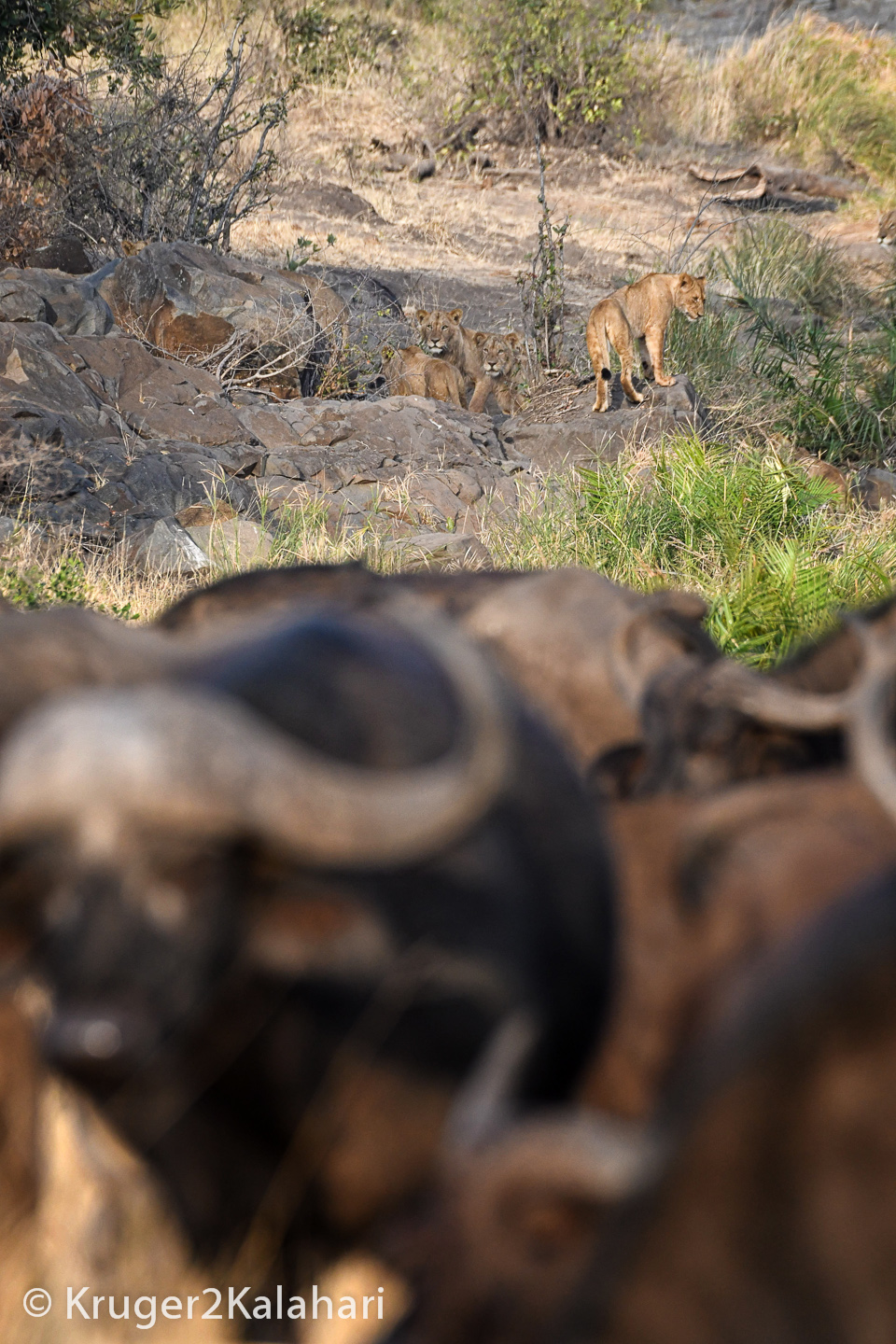