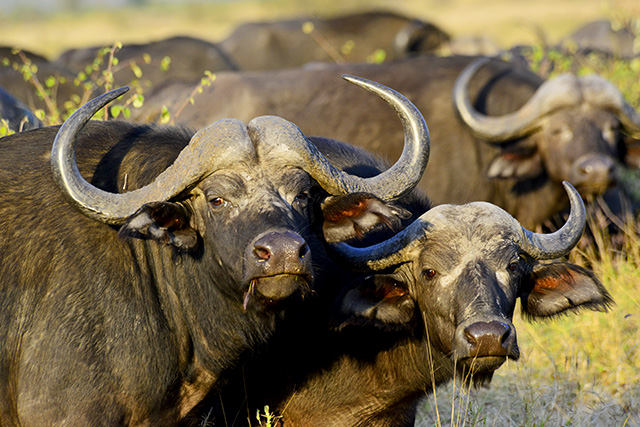 We thought we had seen it all after reading an article bashing the Kruger by an 'expert' who has "visited hundreds of national parks, has been photographing wildlife for 35 years and has published dozens of wildlife photography books that have been translated into several languages" yet he could not find predators or get good photos of the big cats on a 30-day safari to the Kruger Park! You read right - 30 days!!

He then goes on to blame the Kruger park - yet he admitted to me that it was his fault with "bad planning and a bad driver"! (You can read more in this article ‘The Kruger National Park – Magnificent or Mediocre?’)

Now we have read another article, How not to be part of the herd that basically says the same thing - you will NOT be able to get close to the Kruger’s wildlife “unless you’re blessed with uncommon good luck or oodles of money”!

(We do agree with the author that the food and/or service at the Kruger restaurants is generally not great (except for Cattle Baron in Skukuza, Mugg & Bean at Lower Sabie and the Afsaal picnic site) and that is why we usually braai / BBQ under the stars but as for the rest of the article...!)

Then, at a luxury lodge, you will see lots on a guided safari but it will cost you a fortune.

He has, however, found the middle ground, actually it’s the ”best of both worlds” –

...it’s a lodge that sends a driver to pick you up in Sandton and takes you back to the lodge, which is based outside the park and then each day you are driven to Thornybush Game Reserve where you get into open game viewing vehicles and get taken on your game drive.

This third option isn’t anything new – it’s simply night visitors visiting a private reserve where you are taken on a 3-hour morning or afternoon game drive. (We don't want to call them 'day visitors' as the Kruger Park already has day visitors - these are people who are not staying overnight in the park and they come into the park just for the day to do a self-drive safari.

Most of the private lodges offer this 'night visitor' service and we don’t think staying outside the Kruger Park, travelling to a lodge twice a day and clambering from one vehicle into another is a better option than staying inside the park, where you can photograph by day and night and be serenaded by nocturnal animals such as hippos, bush babies, hyenas and lions!

We enjoy both guided safaris and self-drive safaris so I don't know why this author has to make self-drives seem so horrible (I wonder if he has even been on one?). Each of the three options above suit different people:

·         Luxury safaris - for people who want luxury, such as heated towel rails, their own private vehicle, etc. (Keep in mind that you get very expensive private safari lodges and the more affordable safari lodges so even here there are choices);

·         Self-drive safaris - for those who want more adventure and freedom;

·      Night visitors - for those who stay outside the Kruger Park and want to experience a night drive in a private game reserve.

We have been on about 80 guided game drives but have to say that a self-drive safari is still our favourite way of finding and photographing animals so here we are responding to the author's criticism of self-drive safaris in order to provide a more balanced view.

The author mentions that “the thought of a self-drive visit to the park [was] virtually unbearable” and yet, after visiting many African national parks over the past 18 years, we feel exactly the opposite as we don't mind being part of the herd, as we work around the crowds!

So, let’s see what we saw on our safari while we were ‘part of the herd’…

I went to Swaziland on business for a few days so decided to spend the two weekends on either side of the business days in the Kruger Park as the distance from Mbabane, the capital of Swaziland, to the Kruger’s Malelane Gate is just 150 kilometers.

We entered Malelane Gate at about 07h30 on the Saturday and checked the previous day’s sightings at the gate and saw that there were lion (red) and leopard (black) sightings on the S25 Crocodile River road plus a cheetah (white) on the S114... 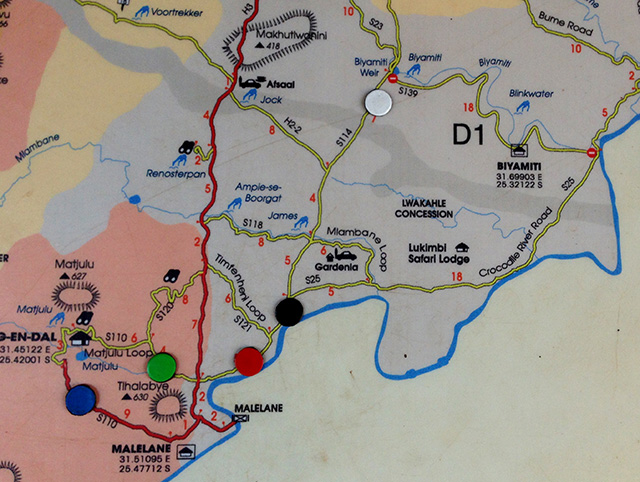 We drove around the Gardenia Hide and up and down the S25 Road but did not see any predators. We then decided to drive up to the Biyamiti Weir to see if we could find the cheetah. On the way we stopped at James waterhole where we had our breakfast. While there we checked the Kruger Sightings on our iPhone and saw that there was a cheetah sighting on the S25 road. 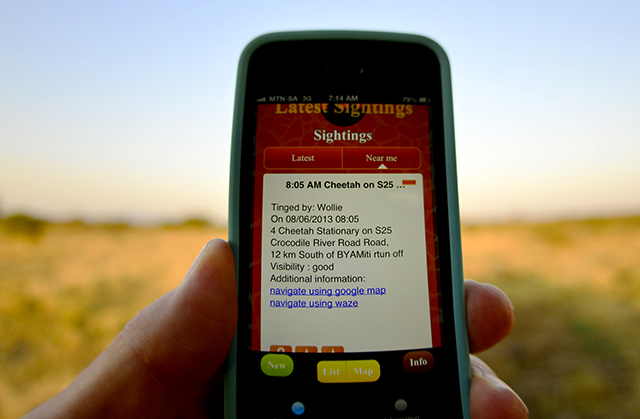 We thought, ‘wow, the cheetah has moved quite a distance in just one day, from the S114 to the S25!’

After breakfast we headed back to the S25 but still could not find any cats! We decided to stop at the Mlambane Bridge and photograph a croc sunning itself and a Hammerkop fishing for catfish. 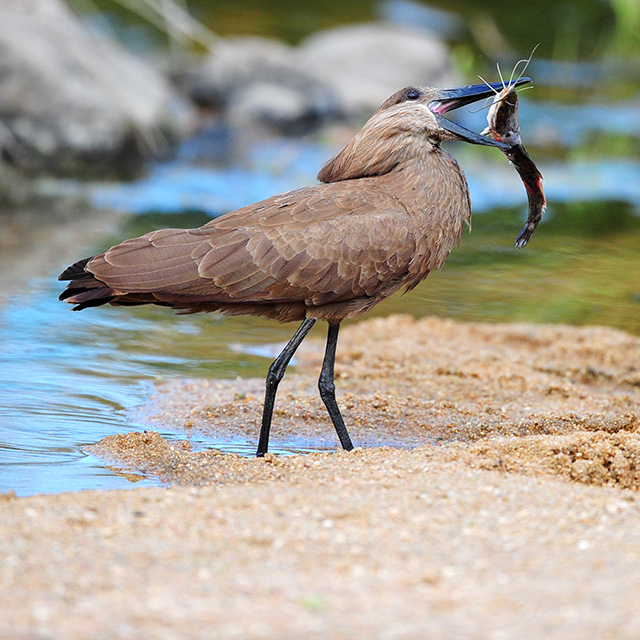 While watching the Hammerkop we caught movement in the reeds and saw a leopard that proceeded to stalk impala and a kudu that had come to drink from the water pools in the riverbed! 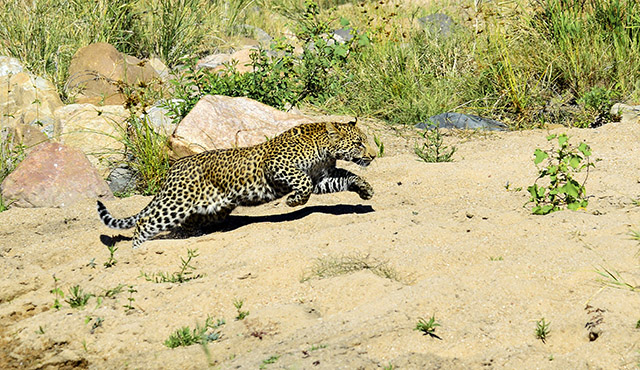 We photographed the leopard and got some nice shots but it was unsuccessful in hunting the prey. There were three vehicles in total on the bridge, us and two others, so we were not excatly 'part of the herd' here.

We were tired from a long drive so decided to check into our lodge at lunchtime. Our neighbours arrived late afternoon and said they had also seen the leopard at the bridge but now there were two leopards!

We then went out at 16h00 on a game drive and found the 4 cheetahs (a female with 3 adolescents), still on the S25, about a kilometre past the Lukimbi turnoff. 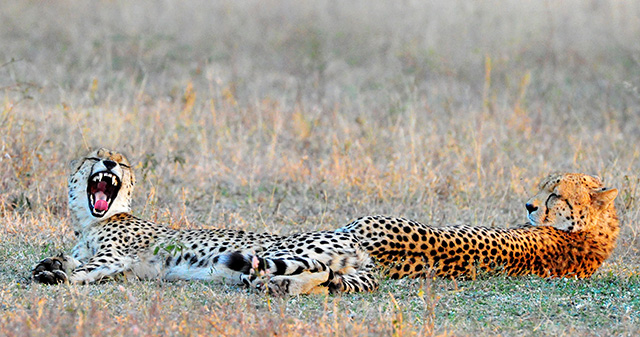 We had not found them in the morning as we did not go past the Lukimbi road – we thought they were closer to the Gardenia Hide. 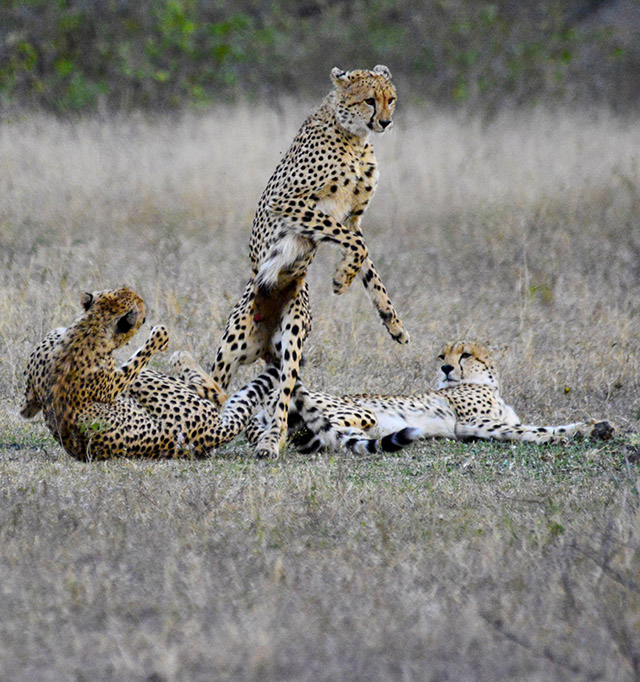 The next morning we went back to the Mlambane Bridge hoping to see the two leopards but instead found the two male lions! 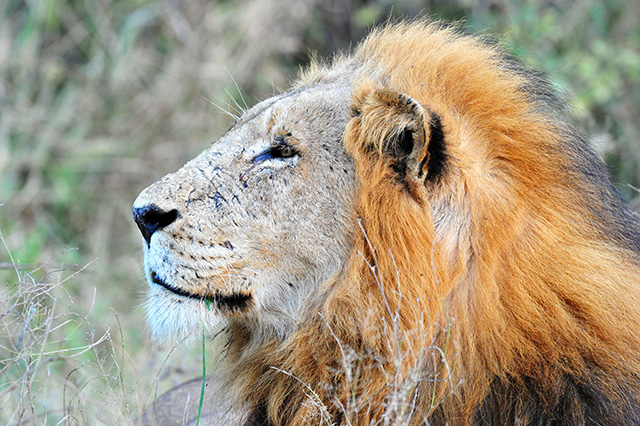 The next day we had a reservation at Skukuza so we headed up the S114 and bumped into this lone male cheetah! 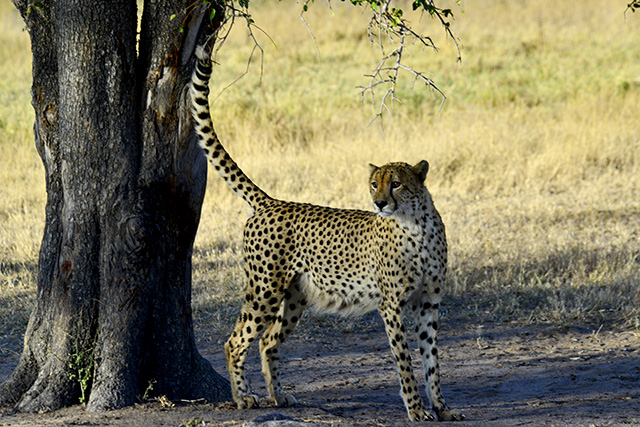 This was obviously the one that had been sighted on the S114 the day we arrived and it was still in the area.

We think you’ll agree - not bad images for just 3 days on self-drive 'part of the herd' safari? The subjects are not obstructed by thick bush, the animals are off the roads, they were all close to the vehicle and we were not “surrounded by swarms of cars” at the sightings – we had most of these sightings to ourselves!

All a forward-thinking self-drive visitor needs to do is check the park sighting boards, speak to other people, use the www.latestsightings.com service and invest in a site guide , like the Photographer's Guide series of eBooks, that will provide animal hotspots and hints and tips on how to find the animals and how to capture the best shot.

Being part of the herd is not bad, if you have a strategy - 'luck and oodles of money' are not a necessity for finding and photographing the Kruger Park's animals!﻿

Click here for part two of our trip report where we then travelled (as part of the herd) through the Kuger park and exited at Orpen Gate to visit Kambaku Lodge, which is situated in the Timbavati Game Reserve - home of the famous Timbavati White Lions!

Return from Part of the Herd to Trip Reports page