While chatting with people I have learned that there is a tremendous amount of misinformation about dinosaurs that leads to confusion and misunderstanding about evolution and creation.

I would like to share with you what I have discovered over the past five years in the hope that it will provide you with some answers to your questions and uncertainty.

In order to answer the three critical questions of...

• Where did you come from?

• Why are you on this earth?

• What happens to you after you die?

...we need to look at the answers to a few more questions, but relating to dinosaurs...

1. When did dinosaurs roam the earth?

• In 1997 researchers discovered fossils in a dinosaur nesting ground in Argentina. They found several eggs that contained the tiny bones of embryonic dinosaurs as well as an egg with the fossilized skin of an embryonic dinosaur.

Expedition co-leader Lowell Dingus asked "How could such delicate skin have been petrified quickly enough after the animal died to survive for more than 70 million years?" • In 1992, Dr. Margaret Helder reported two cases of “fresh” dino bones that were discovered in Alaska. In her report she asked: “How these bones could have remained in fresh condition for 70 million years is a perplexing question”.

The above finds show that dinosaurs still roamed the earth just a few hundred years ago.

[This is an excerpt from the DVD project "T.R.U.T.H. about the Dinosaurs"

2. Are Dinosaurs in the Bible?

Yes – they are referred to as ‘Dragons’. You will find at least 23 references to dragons (and the like) in your English KJV Bible, the most popular one being Job 40:15-18, which gives a very detailed description of an animal that sounds like a Sauropod dinosaur:

Behold now behemoth, which I made with thee; he eateth grass as an ox. Lo now, his strength is in his loins, and his force is in the navel of his belly. He moveth his tail like a cedar: the sinews of his stones are wrapped together. His bones are as strong pieces of brass; his bones are like bars of iron.

Some people say that 'behemoth' refers to an elephant, hippo or other large mammal. Well let's see - we'll start with the largest land mammal, the African Elephant... 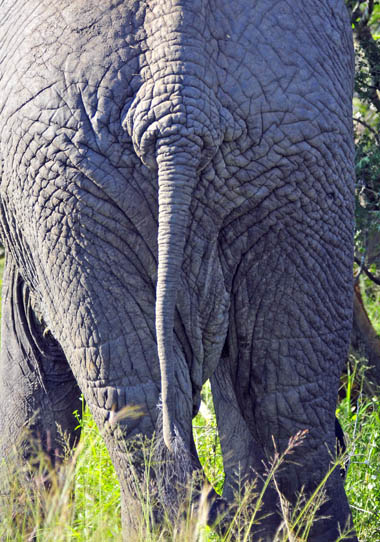 Nope - that tail is not like a cedar tree.

Let's look at the next biggest animals, the White Rhino... 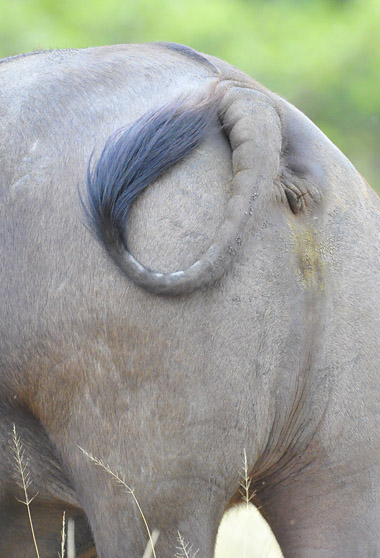 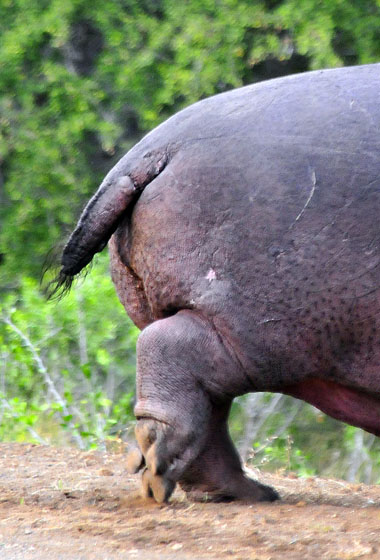 All the above animals' tails are tiny, certainly not like ‘cedar trees’!

Why then does the word ‘dinosaur’ not appear in the bible? Well, the word dinosaur was only coined in 1841 by Richard Owen and the English version of the Bible was translated 200 years prior, in 1611.

3. Has anyone ever seen a dinosaur?

Scientists will say that they can learn a lot about so-called 'primitive' man by the pictographs and petroglyphs they left behind, (pictures & symbols of animals they saw, activities they participated in, places they've been).

But, this only seems to work as long as it lines up with the theology of said 'scientist'. There are many pictographs that have been drawn by people during the past few thousand years but many scientists tend to ignore these. There is much existing evidence to show us that people did indeed see dragons / dinosaurs…

• When Alexander the Great (330 B.C.) and his soldiers marched into India, they found people worshipped huge hissing reptiles that they kept in caves.

• There is a picture of ‘the dragon of Marduke’ on the Ischtar gate of Babylon in Iraq.

• There is a petroglyph in Natural Bridges National Monument that bears a startling resemblance to a dinosaur, specifically a Brontosaurus, with a long tail and neck, small head and all.

• When Marco Polo was in China (1275 -1292) he reported that dragons were bred to pull the emperor's chariots. China is also renowned for its dragon stories, and dragons are prominent on Chinese pottery, embroidery, and carvings.

• And then there are many other examples of artifacts that show dinosaurs such as the Acambaro Art created between 800 B.C. & 200 A.D. in Mexico , the Ica Stones in Peru circa 700 A.D., and a Stegosaurus carved on the wall of a Hindu temple in Cambodia, circa 1186 A.D

4. What happened to the dinosaurs?

• A Different Environment - When they got off the ark they now faced a hostile world. It was very different than the pre-flood world, because the canopy of water that used to protect the earth and them was gone. Before the flood people lived for over nine hundred years. Right after the flood, life spans dropped off instantly to four hundred years, than two hundred, and then a hundred. Something changed.

Well, the canopy of water was gone, radiation was getting in. Air pressure was less, so less oxygen. You get all sorts detrimental effects of the loss of that canopy. So the same thing happened to the dinosaurs - they were dying off because of the climate changes; they couldn’t live long enough.

• The Plight of Dinosaurs - Man was hunting them. Back then they called them dragons. They killed the dragons for meat. There would be a lot of hamburger in one brachiosaurus! You could feed the village for a while, right? Or because they were a menace, or just to be a hero; "I slew the dragon." There are thousands of stories like that.

When people move in, the dangerous animals were driven off or killed off. So as populations in the world began to grow, the dinosaurs began to be killed off. (Those that weren’t died from the climate changes.)

• Extinction isn’t new and certainly not unthinkable – look at the Kwagga in South Africa and the Dodo in Mauritius! Sir Arthur Keith, who wrote the forward to Darwin’s 100th Anniversary edition of Origin of Species, said, “Evolution is unproved & unprovable. We believe it only because the only alternative is special creation, & that is unthinkable.”

What are evolutionists frightened of I wonder!?

5. Do you think it’s important what you believe?

If you believe dinosaurs are billions of years old then you most probably believe in evolution and that there is no God. Keep in mind that what we believe does have an impact on how we think and act.

In an interview with Stone Phillips, Dateline NBC, Nov. 29, 1994 Dahmer, just before he was murdered in jail, said:

“If a person doesn’t think there is a God to be accountable to, then what’s the point of trying to modify your behavior to keep it within acceptable ranges? That’s how I thought anyway.

I always believed the theory of evolution as truth that we all just came from the slime. When we died, you know, that was it, there is nothing...”

Scientists have over recent years found so-called ‘evidence’ to prove evolution. Here is the ‘evidence’ courtesy of Chick Publications…

• Heidelberg Man - Built from a jaw bone that was later conceded to be human.

• Nebraska Man - Built up from 1 tooth & later found to be from an extinct pig.

• Piltdown Man - A fraud that consisted of the jawbone of an orangutan plus a human skull.

• Neanderthal Man - At the International Zoology Congress (1958) Dr. Cave said that the skeleton found in France > 50 years ago is that of an old man with arthritis.

• Cro-Magnon Man - One of the earliest and best established fossils is at least equal in physique & brain capacity to modern man...so what's the difference?

• Then in 1999 the Archaeoraptor fossil was introduced and hailed as the 'missing link' between carnivorous dinosaurs and modern birds. It was exposed as a fraud - a chinese farmer had glued the head and body of a primitive bird and the tail and hind limbs of a dromaeosaur dinosaur together!

If there is evidence to prove evolution then we must ask where it is. Currently there is zero evidence.

All the past evidence was found to be frauds or hoaxes. If the earth is billions of years old there should be millions of fossils to prove evolution, not so?

The Bible tells us that God will hold us accountable for our sins, unless we repent and trust in His Son Jesus Christ who died for us. That is the 'good news' for us sinners – our fine has been paid in full - if we choose to believe the truth!

I have a friend who was born into a Jewish family but he does not believe in the God of the Old Testament. He believes in evolution - this is his religion!

He is so stubborn that he refuses to even consider alternatives to what he thinks is the truth. When I witness to him he laughs at me and says that I believe in a fairy tale because there is empirical evidence to prove evolution, but zero evidence to prove that Heaven exists.

I then ask him to tell me what this empirical evidence is and where I can see it with my own eyes, like I can look around me and see creation, which proves to me there is a mighty Creator.

I ask him to tell me which museum, which floor and which exhibit I should look at and then he gets angry because he cannot give me an answer! He has based his belief on what he has heard on TV programs.

He doesn't seem to realise that scientists are mere humans and what is today's scientific 'fact' becomes tomorrow's joke!

Remember that it used to be scientific facts that the earth was flat and that there were exactly 1100 stars yet God's word in Isaiah 40:22 tells us that 'The earth is a sphere', and in Jeremiah 33:22 He tells us that there is an 'Incalculable number of stars'!

If I email my friend some information, like the above comparison, he tells me "I didn't read what you sent me, I deleted it because I know what you are trying to do".

It would seem that he has so little faith in his belief that he cannot chance reading something that may convince his conscience that he is wrong!

This is pride in action and the devil uses pride and arrogance to blind us to the truth.

Please don't be like my dear friend - allow the scales to be taken off your eyes so that you can see the truth and save your soul!

For more information on evolution vs creation and dinosaurs check out these great sites: