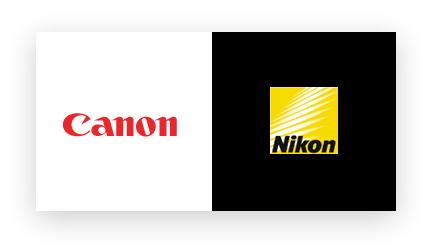 Nearly every month some photo magazine has a stand-off, shoot-out or other comparison between the latest pro or consumer Nikon and Canon bodies and/or lenses.

1. mainly beginners and techies (people who love photo gear) will be arguing over which brand is better - the Canon vs Nikon debate has become so tiring!

2. Intermediate photographers (and techies) tend to argue over which lens is better - here they will be comparing f-stops, weight, VR vs non-VR, and so on.

3. Advanced and professional photographers tend to discuss accessories such as better Beamers and other photo aids that help solve problems and improve photographs. They know that the brand does not matter - it's the person behind the lens that is the key.

If groups 1 and 2 would just be satisfied with what they own and focus on making photographs their photography would most probably improve overnight!

Until a few years ago Canon was the clear winner in terms of features as they had image stabilization (IS) and ultra-sonic motors (USM) in their lenses but Nikon has caught up.

In the past asking the question Canon or Nikon was easy as nearly all photographs of the photographers at sporting events showed just white Canon lenses - there was no sign of a black Nikon lens.

But from the 2008 Beijing Olympic games this picture (from a Russian website http://www.webpark.ru/comments.php?id=39979) shows how things have changed, with at least 50% of the lenses at sporting events now being black Nikon lenses... 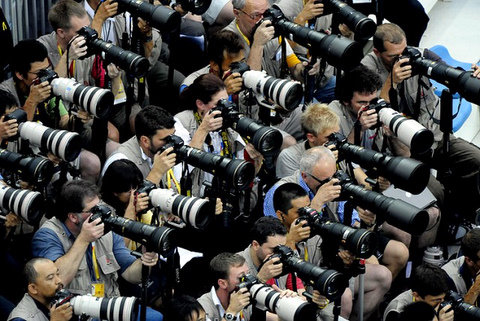 In addition, some photographers are trading in their Canon gear for Nikon gear so the answer for Canon or Nikon seems to be changing!

David Du Chemin is one such example. On his blog he cites the following reasons for changing from Canon over to Nikon...

1. Ergonomics. I love the feel of a Nikon. Always have. After a long Pentax phase as a kid I shot Nikon film cameras and loved them.

2. Focus. Sorry, but I fight with Canon focus and even on my 1DsMkIII it struggles more than the Nikons I’ve played with. I know this hurts, but Canon’s just not gaining new ground fast enough. This is a biggy.

Those three sealed it for me. But here’s two more.

4. The Look. Different cameras, different looks. Not the look of the camera, the look of the photographs. Ya wouldn’t fault a guy from switching film stock, would you? Is the difference noticeable? I think it is. It is a case of one being better? I don’t think so. Just different. My 200mm isn’t better than my 85mm, they’re different. Vive la difference!

5. The small things. I’m out shooting and want to level my Canon? I need a bubble thingy. I want to shoot intervals? I need a $300 cable release that doesn’t even have an off-button. The D3s allows me to drop in 2 x 64gb CF cards and shoot to them in a variety of ways.

My Canon 1DsMkIII makes me use 1 CF card and 1 SD card if I want to do that. Retarded. I can use the D3s batteries in the grip of the D700, allowing me to take one set of batteries and charger, not two. Sure, small things, but they matter. Also, rumor has it the flash system on the Nikon isn’t prehistoric.

It would seem that Canon is losing ground, or are they?

Canon is the largest camera and lens manufacturer in the world and they had innovative inventions such as IS and USM so it stands to reason that there will be more Canon sales than the opposition.

Nikon has, however, caught up with their VR (Vibration Reduction) and SWM (Silent Wave Motors)and even overtaken Canon in some areas, such as with low noise in high ISO photos and their superb creative lighting system, therefore some photographers are switching.

David Du Chemin teaches photography and some of his students have Nikons while others have Canons. He can confidently answer the Canon person but he cannot answer the Nikon person so easily, hence he is changing to Nikon so that he will now understand both primary brands equally.

Some professional photographers who run photo workshops saw this potential problem a while back and so you have some husband and wife teams where the one shoots with Nikon and the other shoots with Canon. By doing this they appeal to a much wider market of clients. People change brands for various reasons - Joe McDonald changed from Nikon to Canon a few years ago primarily because he received very poor service from NPS (Nikon Professional Services) in the USA.

Canon or Nikon was never a question for me as I used to have Minolta gear. I changed from Minolta to Nikon as I received terrible service from the South African agent for Minolta.

I was in the enviable position of being able to choose between going with Canon or Nikon - I chose Nikon as I liked the F5 body and at that time Nikon products were cheaper than Canon's.

I currently drive a Toyota 4X4 - is it because it's the best 4X4? Who knows which is the best - all I know is that in the past when I owned a Toyota Camry I received 5-star service from the Toyota dealers and average service from Jeep and terrible service from Land Rover, so when the time came to trade in my old vehicle it was a no-brainer which brand I would go for.

Friends of mine who shoot with Canon had some focusing problems on their new bodies and they are not happy with the service from the local Canon service center so I am happy that I currently own Nikon.

This could change in the future as these things tend to be cyclical - no company is perfect and currently Nikon seems the more stable. In a year or two who knows - maybe the two companies will have merged and we'll have Niknon or Cankon equipment! (Not too far fetched if you look at all the recent accounting firm mergers!)

To quote Joe McDonald, "let me make it quite clear that the brand doesn't make the photographer, and good shooters will do good work with any system".

After using Nikon gear for the past 15 years am I happy with their products and service - yes I am. Read this page for more about my experience with Nikon Service and Repair.

At the end of the day brands like Canon or Nikon don't matter, photographs and service do!

Return from Canon or Nikon to Nature Photo Gear page

Return from Canon or Nikon to Kruger-2-Kalahari Home page