The Rule of Thirds

All good photographs should have at least one main subject (centre of interest), which should be placed off-centre yet most beginners are tempted to place their subject slap-bang in the middle for a variety of reasons.

If you are a photography or art student you would have come across the 'golden mean', which is a mathematical principle that was used to construct buildings such as the Parthenon in Greece.

Adapted from this principle, and simplified, we now have the “rule of thirds” for constructing / composing photographs.

This rule is used as an aid to help you place the focal point of your photograph where you feel it is best suited.

The “Rule of Thirds” is just one of the many aspects that photographers learn about in classes on photography when dealing with composition, which we will be dealing with on other pages as they apply to nature photography.

What is the Rule of Thirds?

The basic principle behind the rule of thirds is to imagine breaking an image down into thirds (both horizontally and vertically) so that you have 9 parts.

Most modern digital cameras have the ability to add a screen in the viewfinder electronically or have it permanently etched in the glass of the viewfinder with these 9 sections but most photographers do this placement in their minds when looking through the viewfinder or in the LCD display.

The theory is that if you place points of interest in the intersections or along the lines, your photo becomes more balanced and will enable a viewer of the image to interact with it more naturally. 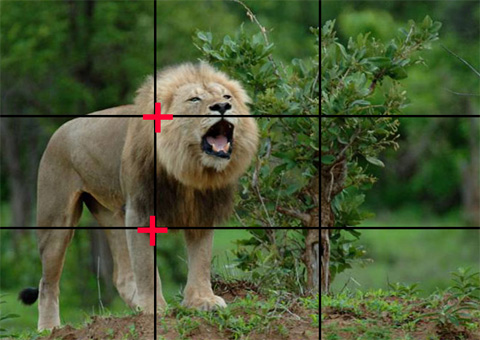 Studies have shown that when viewing images, people’s eyes usually go to one of the intersection points most naturally rather than the center of the photograph – using the rule of thirds works with this natural way of viewing an image rather than working against it.

It is interesting to note that the focal point appears most balanced if it is placed on the bottom or top left of the grid intersection as in western culture we read from left to right and the eye flows in naturally and then moves around the space on the right of the picture and then again back to the focal point.

The most important thing is for you to place your subject on one of the intersection points, be it on the left or right, in order to provide space for the subject to look or move into, thereby providing a more appealing photograph.

If there is more than one subject in your photograph you would place both subjects on one of the horizontal lines and near the intersections... 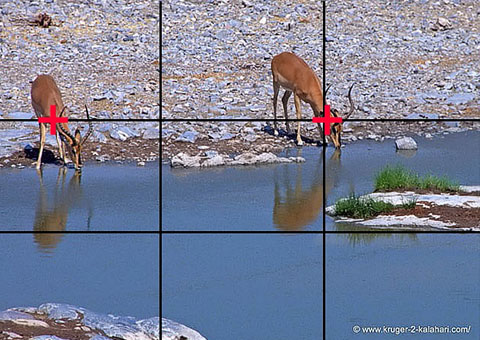 or on both of the horizontal lines and near the intersections, depending on where they are... 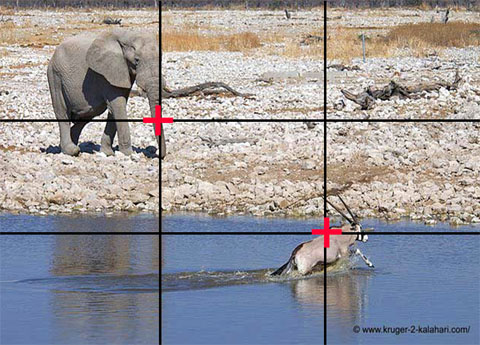 If you shoot landscapes then you would place the horizon along one of the two horizontal lines and have 1/3 ground, 2/3 sky or vice versa... 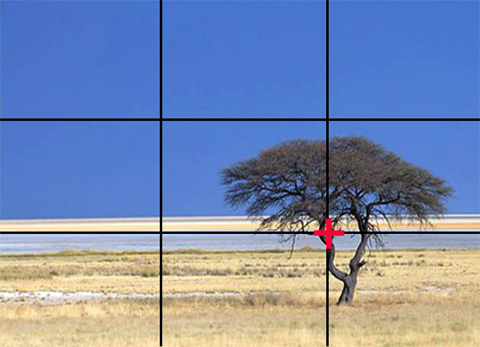 Even though it is called a 'rule' it is more of a guideline to help you improve your compositions.

Most times you should use this rule of thirds but there will be times it is not appropriate such as with fast-moving subjects, in low light or when you want to place a subject in the middle because it looks better there!

Return from Rule of Thirds to Safari Photo Tips page