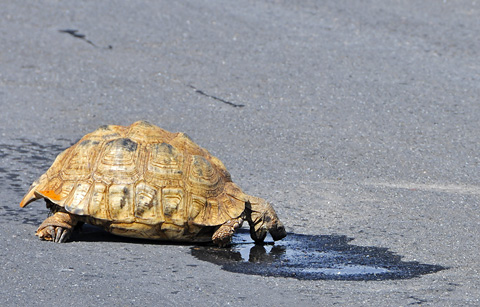 After the rains many animals come into the road to drink water that has collected in the potholes and depressions, like this leopard tortoise.

After we had photographed him we passed about 5 other vehicles heading for the Kgalagadi doing over 120 kilometers per hour, driving close to each other - I just hope the tortoise survived this onslaught! 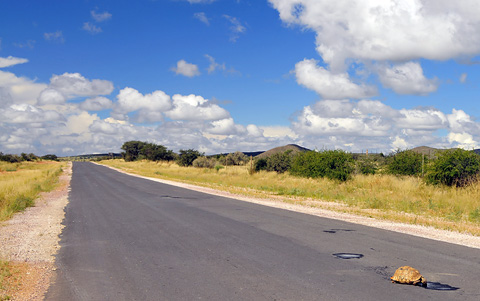 Many species of animals end up as road kill as they are habituated to roads and traffic while others have to cross the road to get to food or water. 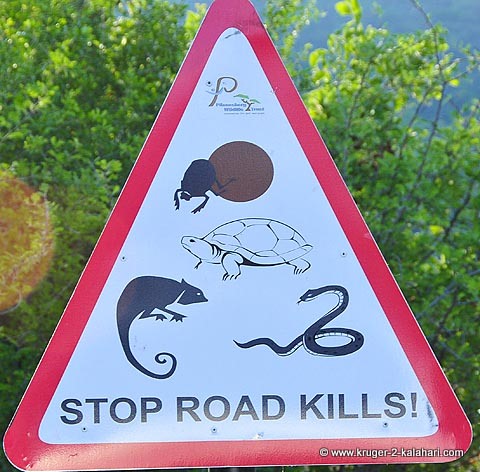 We have found two primary causes of road kill:

1. Speeding is one of the primary culprits – from official vehicles to delivery vehicles and visitors. 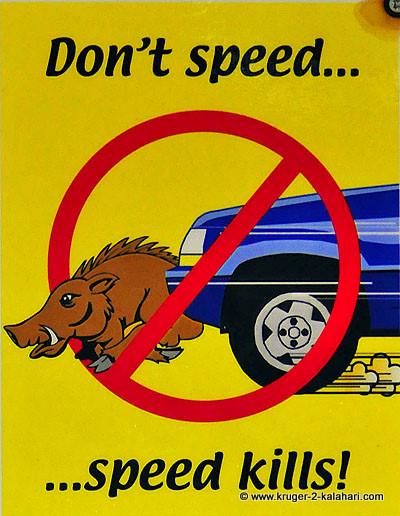 2. Not watching the road is the other reason. Some drivers of vehicles do not stop and scan the area for game – they drive while looking left and right.

For example, in the past we stopped to watch a chameleon crossing the road and an approaching car did not drive up to us and stop but carried on driving past us while looking into the bush to see what we were looking at. Many people assume that the animal is ‘deep in the bush’ when in many cases the animals that are being observed are next to or right in the middle of the road! 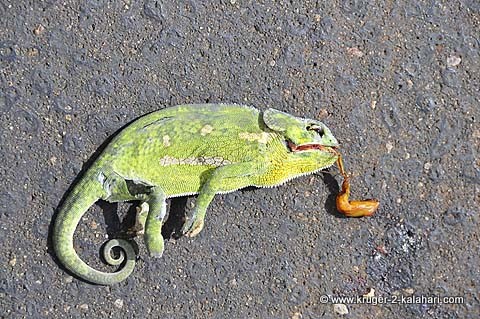 What we now do is block the road so that the tortoise or chameleon can get to the other side in one piece! The on-coming traffic is forced to slow down or stop. We are not playing policeman – just trying to save animals lives.

One final piece of advice - if you see elephant dung in the road, please don't drive over it as it could contain dung beetles, butterflies and other animals... 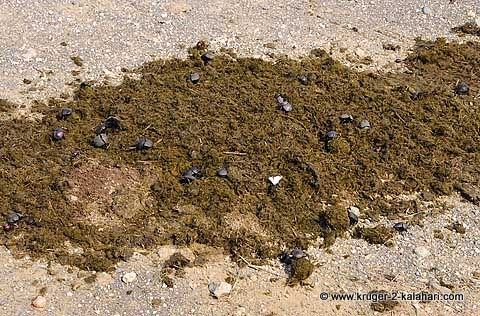 To give you an idea of the seriousness of road-kills, Woodroffe & Ginsberg in 1999 published some statistics on the causes of endangered wild dog mortalities in the Kruger Park in South Africa, Moremi in Botswana, Kafue in Zambia, Hwange in Zimbabwe, and Selous in Tanzania.

In addition to the large mammals we have seen dead jackals, bat-eared foxes, birds, reptiles and insects in the roads. Most of these deaths are so unnecessary and are avoidable… 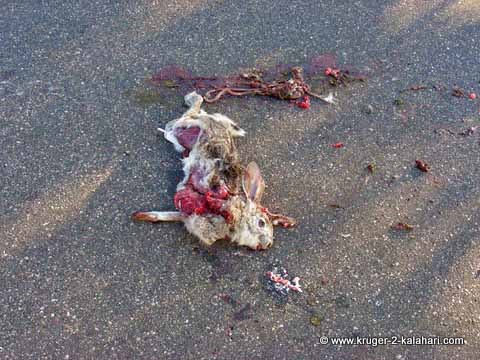 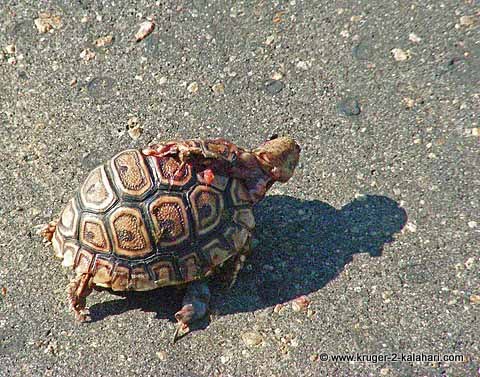 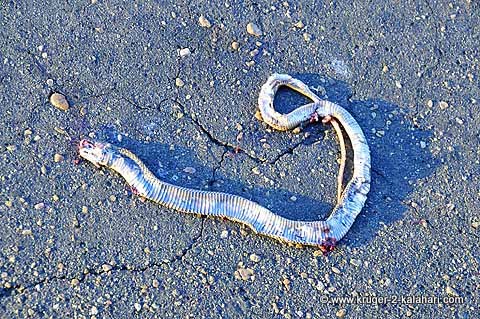 In the Kruger and Pilanesberg the roadkill victims are found mainly inside the parks on the tar roads. We have not seen much roadkill in Etosha but many dead animals on the road from Botswana to Windhoek, from Windhoek to Swakopmund and from Windhoek to Etosha.

In the Kgalagadi we have not seen much roadkill inside the park but so much roadkill along the road from Upington to the park and a bit less on the Kuruman to Askham road.

There are warning signs along the Upington to Kgalagadi road... 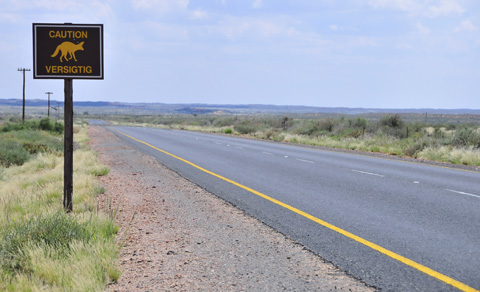 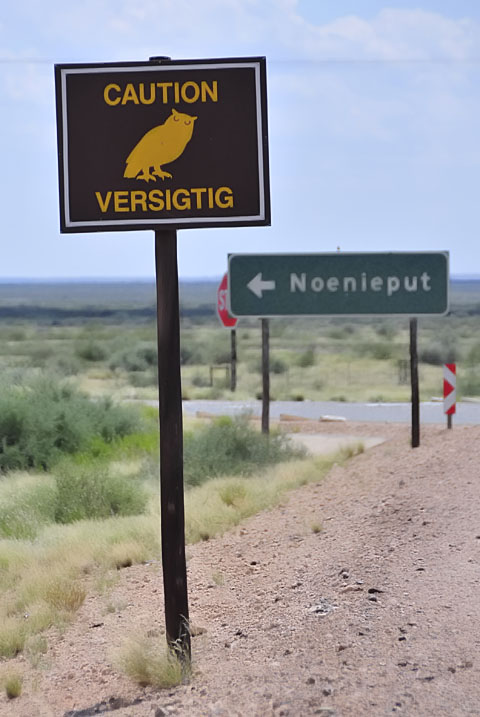 ...but it seems some people simply don't care. On our trip to the Kgalagadi in March 2010 we saw 3 dead bateared foxes. This one was fresh and still had blood coming out of his nose and mouth - this was at midday, not at night, so we are asking did the driver run over the fox on purpose as he must have seen him?

We could not see the speedster vehicle ahead of us as he was driving too fast. 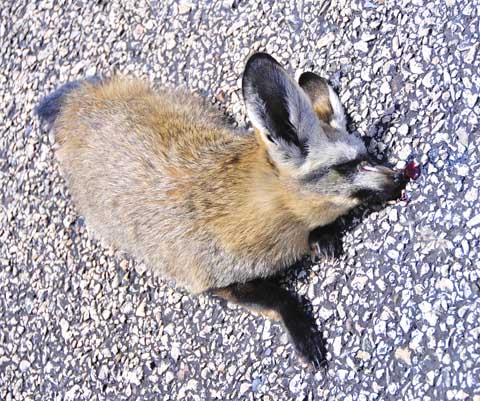 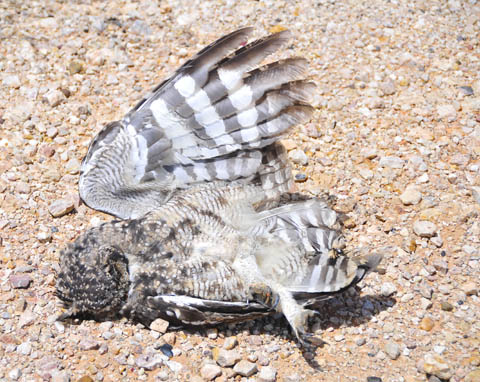 ...lizards, pale chanting goshawks, jackals, a mongoose, buck and other animals that we could not identify as they had been ridden over so many times.

In addition to these dead animals we see quite a few burnt-out vehicles... 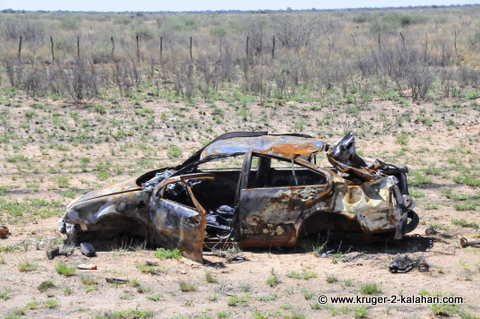 and crosses along the routes from Johannesburg to these parks... 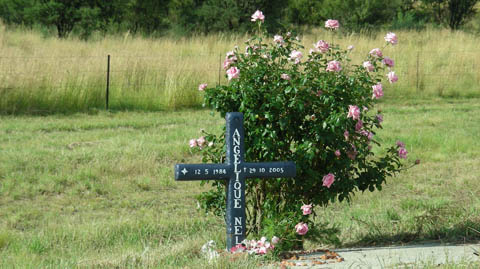 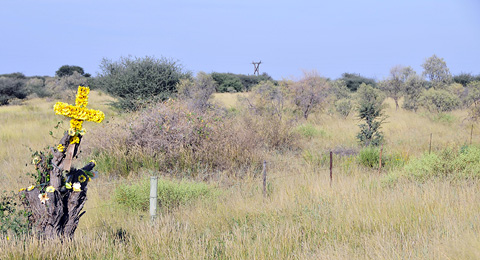 The placing of crosses and memorials at the site of road traffic deaths has become a common practice - next time you are travelling around Southern Africa try and see how many of these crosses you can count.

So this road kill page does not apply only to animals but humans as well!

When you are in the wilderness there are many things that could go wrong; from your vehicle breaking down to having a lion resting in the shade of the toilet when you are trying to enter - this happened in the Kgalagadi and that is why they have now fitted doors to the toilets that close automatically!

There is much information on survival skills in the wilderness – what plants provide food, where to look for water, how to make a fire and so forth.

But what about surviving our physical death? There is only one certainty in life - there is a 100% certainty that you and I will die. Humans are fascinated by living forever – hence movies like the Highlander, to name just one.

Please keep in mind that 100 out of 100 people will die - have you prepared for that day, because we will be dead for much longer than we are alive on earth...!?