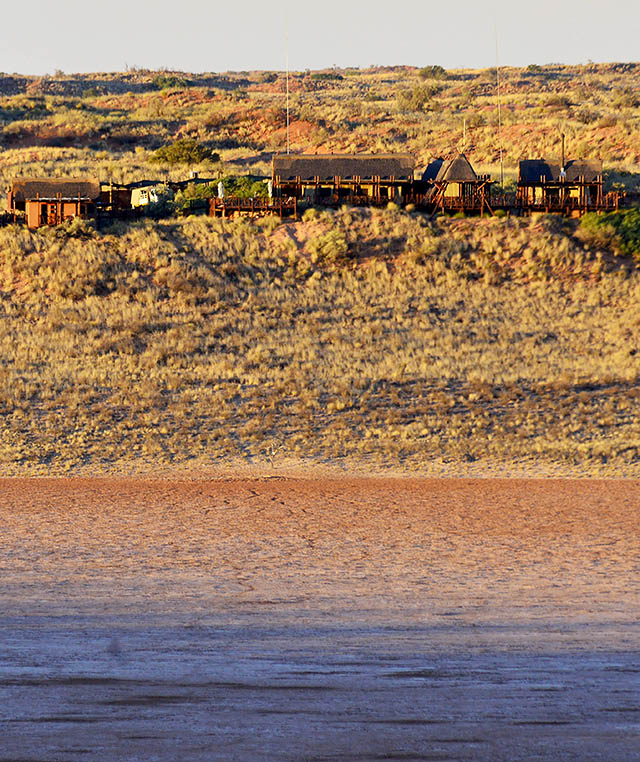 We left home at 03h00 in the morning and had a good drive through Upington to the Kgalagadi. We got to Twee Rivieren at 13h30. There was a hot dry wind that greeted us and it was about 41 degrees Celsius.

We stayed at Twee Rivieren camp for our first night. After unpacking we went for a quick drive into the park, we stopped at Samevloeiing waterhole where we saw Red hartebeest, Gemsbok and Eland - some alive with quite a few carcasses scattered around the waterholes. Then the thunder storm hit followed by rain, what a great start to our two week trip.

We left early the next morning and stopped off at Samevloeiing waterhole where we found 3 cheetahs walking down for an early morning drink, the lighting was brilliant and we got some great photographs. 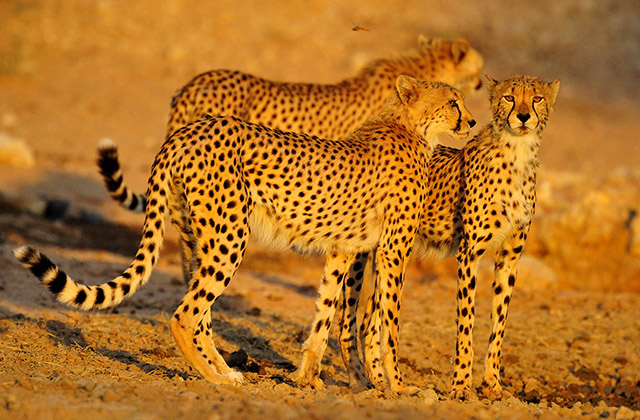 We traveled up the Nossob past Leeuwdril waterhole to Dikbaardskolk and at every waterhole we saw eland carcasses.  They say the eland had come over from Botswana because of the drought; there must have been over 30 thousand eland that came over into the South African side of the park.

﻿We drove over the large dune road towards Kamqua waterhole and as we got over the ridge we noticed a Cheetah at the waterhole but it was now midday and the lighting for photographing was terrible but we took a few shots before moving on to the picnic site to wait for the !Xaus vehicle to fetch us.

We were collected at 14h45 and we followed the !Xaus vehicle, over 37 sand dunes, to the lodge.

Just before arriving at the lodge we spotted this male Lion lying under a bush, not great for photographs but there he was and a good start to our trip. 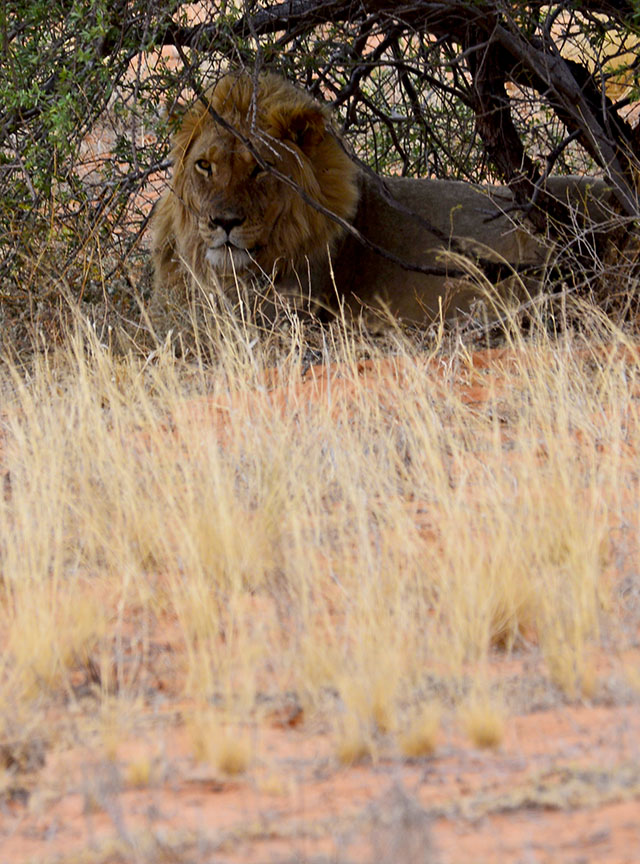 We arrived at !Xaus lodge at 16h00 and were warmly welcomed by Anel and Abram the GM’s. We were handed ice cold face cloths that were so refreshing in that heat.

During our stay, temperatures varied between 10 degrees Celsius at night to 45 degrees during the day. On the day we arrived Anel gave each of us our ‘Kalahari air conditioners’ and we must say they came in very handy! They are made from muslin cloth and you pour a bit of water onto them and let the wind blow through them, which makes them go very cold, and then you put them around your neck or head – instant relief from the heat!

We had never stayed at !Xaus Lodge before so had no idea what to expect - wow what a view!  thing we noticed was the large slat pan with a waterhole on the edge of the pan. The lodge is perched on a large red sand dune at the edge of a huge salt pan and you have a 180 degree panoramic view over the pan. 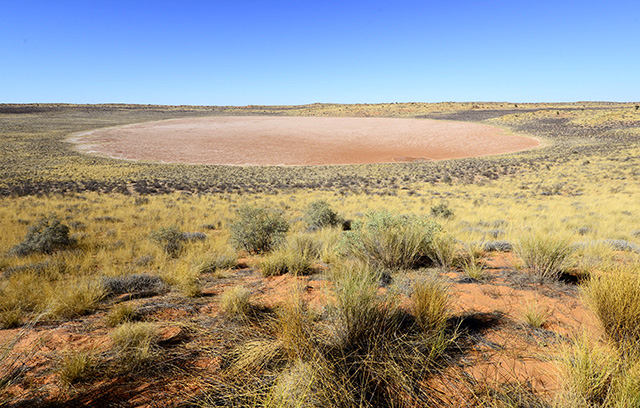 After being introduced to the staff; Ellen and Elsie, the two ladies that prepare all the meals, and John and Grukie, who would be our guide and tracker for the duration of our stay, we were then shown to our chalet. 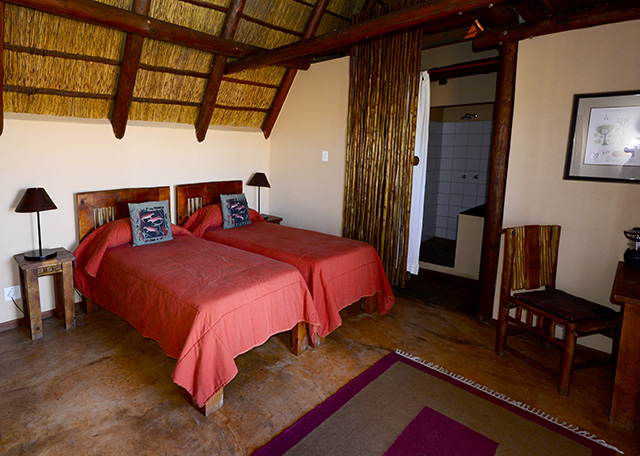 The Chalets are connected to the communal area by raised wooden walkways with chalets on each side. The communal areas comprises a dining room, craft shop, lounge, reception and swimming pool.

A resident Guineafowl, not a bird you would normally find in the Kalahari, had taken up residence in the camp and lived in the craft shop! Anel said it has been there about 8 months and they don’t know where it came from. 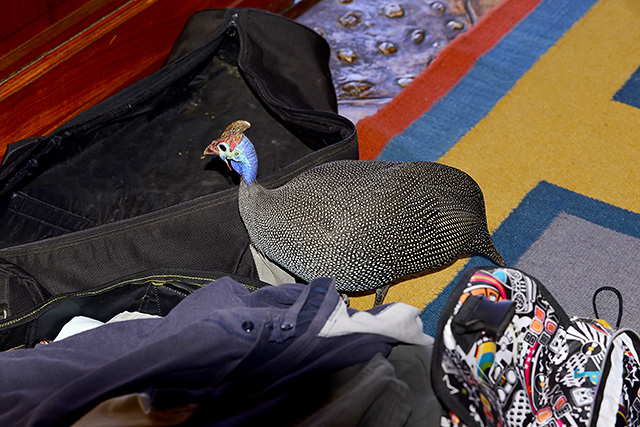 We had a quick look round the lodge before heading for our chalet which was no 1. Our first sighting from our chalet was an eland at the waterhole.

When we looked again the eland had moved off up the dunes and when we then scanned the area, just behind the Craft village, were the 3 lions!

We thought we may see some action but the lions just walked past the eland and they sat on the pan before moving off up the dunes to the east of the camp. 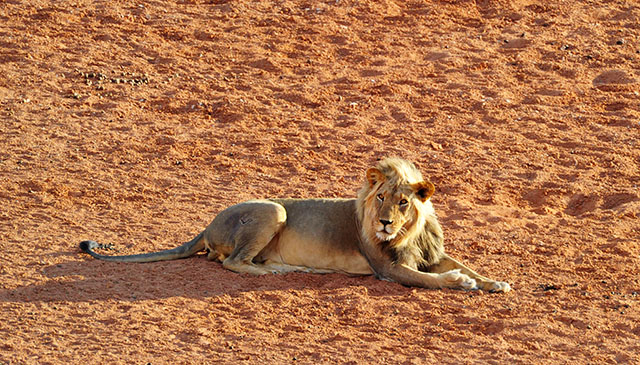 We then had a wonderful dinner on the pool deck overlooking the waterhole and pan. The meal was great - all home cooked by Ellen and Elsie. We had mushrooms wrapped in bacon followed by Chicken stir fry and rice and then to end the meal we had a lovely Peppermint tart, all accompanied by a good bottle of wine.

The breakfasts and lunches were also very good. This was a savory mince pancake that we had for lunch... 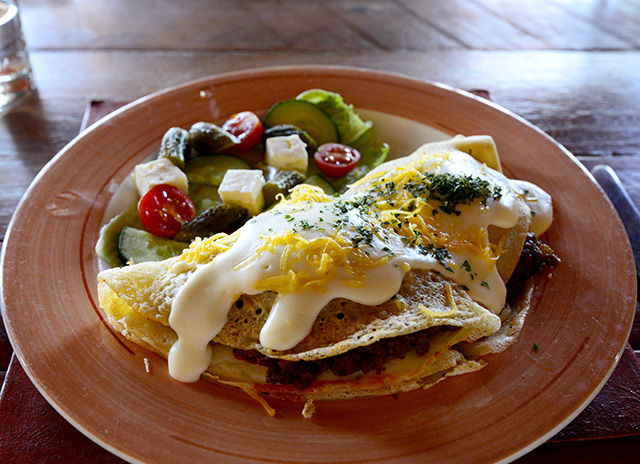 The next morning, we left very early after a cup of coffee and rusks, for an early morning walk in the dunes. Grukie and John were great, stopping to show us things that you would never see from a vehicle. They explained what some of the plants were used for and showed us spoor of the little guys like the beetles and other little bugs. 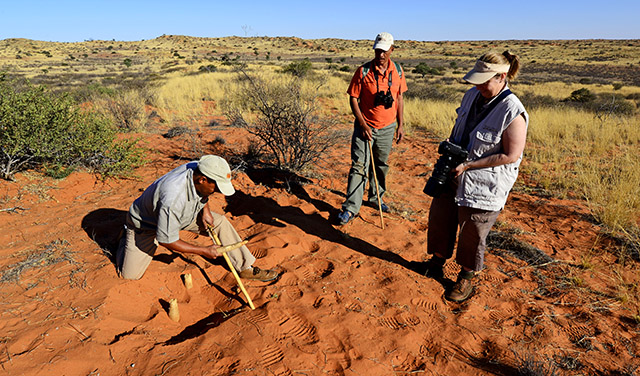 We heard some interesting stories, like the one about the Eland Bush. These bushes when dry make great brooms and the Bushmen would give them to their wives as presents. 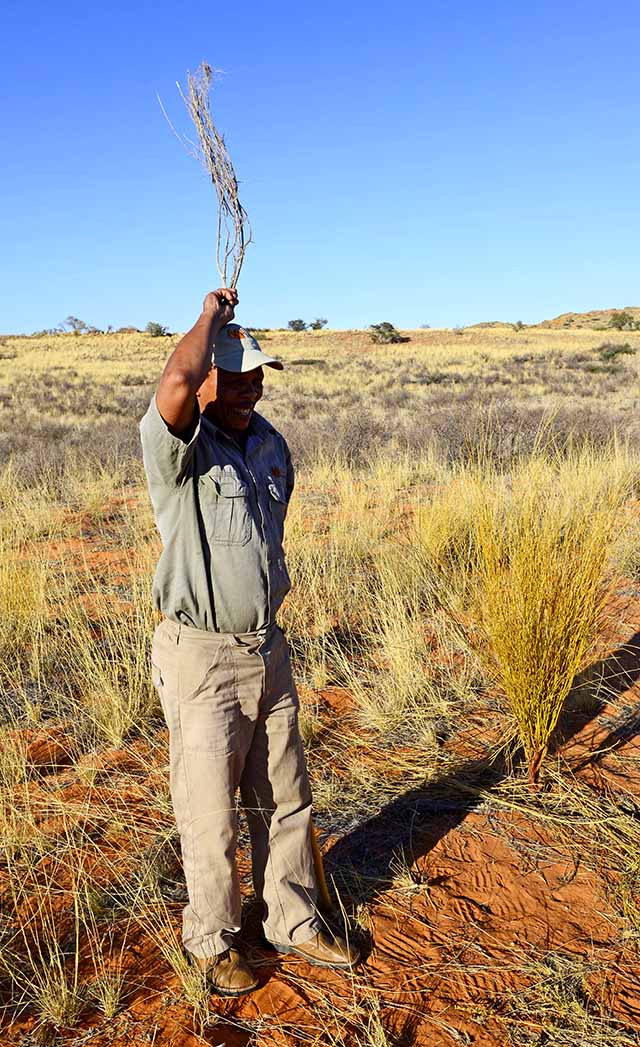 They also put these bushes on their heads to make themselves look taller in case they came across lions in the area. They could also light the bush to make fire in order to keep the lions and other predators at bay. After our 3 hour walk in the dunes it was back to the lodge for a hearty breakfast.

After breakfast Grukie and John took us for a short walk down to the Craft Village, we met Pieter, his wife, and Willem – ‘the beautiful bushman’, which is what he called himself when we showed him a picture we took of him. 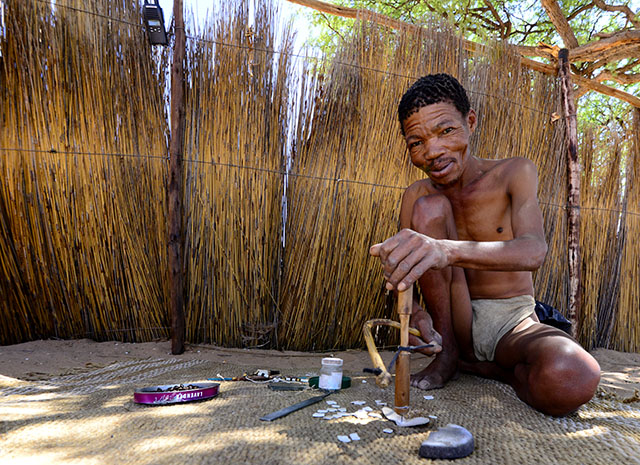 The bushmen make mobiles and other crafts and it’s all done right there at the village. We bought a few unusual items from them and then headed back to the lodge.

After lunch we got ready for our afternoon drive. Grukie took us to a few of the other large salt pans in the area and on the way we found the Eland that we saw at the camp waterhole – he was posing very nicely for us on top of a dune. 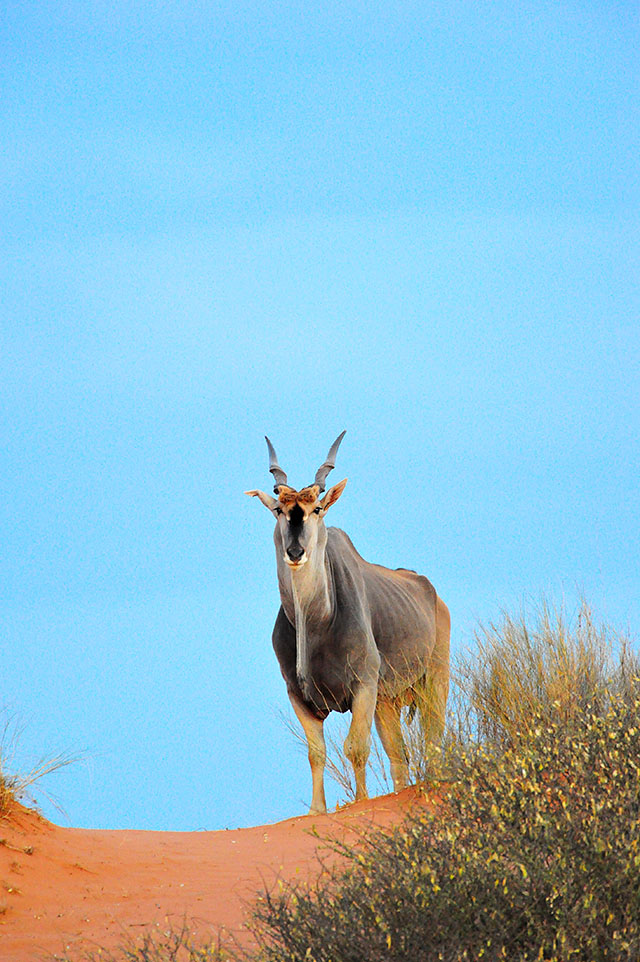 We went for sundowners on a large sand dune overlooking the pan that is in front of the lodge and in the distance you could see the lodge. And keep in mind the great opportunities to photograph sunrise and sunsets from your chalet... 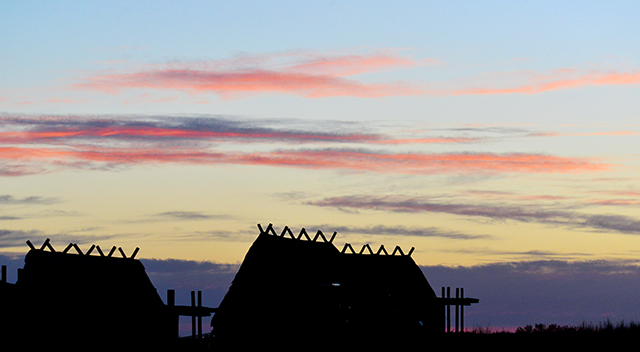 The following morning we went on a game drive and found this lioness at a nearby waterhole... 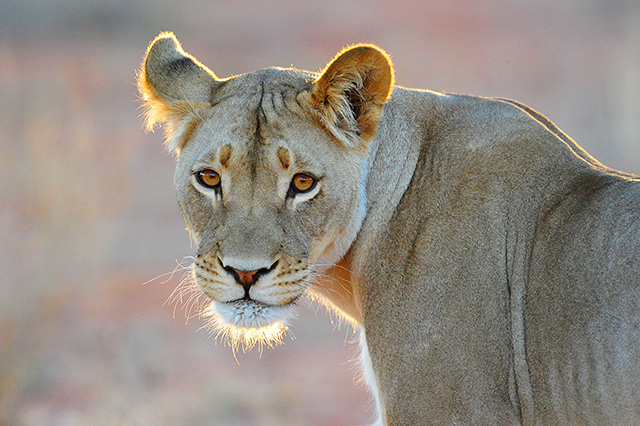 !Xaus does three game drives a day; an early morning drive (or walk) then an afternoon drive and another drive just after dinner when everything is pitch black - this drive gives you the true wilderness feel with just you and the desert for company. 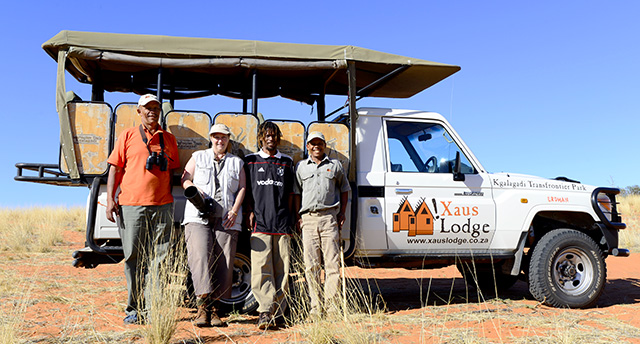 After a few more fab meals and great company as well as the many wonderful game drives, it was time to leave !Xaus. We said a sad farewell to all the staff members who had treated us like family.

For more information on !Xaus Lodge or to make your booking, please click here