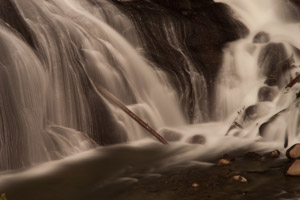 Today, with digital and the ability to change the White Balance, many color filters are unnecessary, graduated ND filters have limited, or dubious value in some cases, and even one of the prime uses for polarizing filters - to enhance blue skies - has been rendered less important via selective RAW color adjustments.

So, does one even need a filter today?

Today, I only carry two filters...

Filters for Digital Photography - the Polarizer

I still use a polarizing filter to enhance skies and to pop out clouds (although, as stated above, if I forget the filter I can do almost as good a job with the RAW converter), but more importantly, a polarizing filter reduces glare and reflections, and I know of no digital trick that can replicate that effect.

Polarizers, then, can enhance the colors in a fall foliage scene by removing the waxy glare off leaves or grasses, tree bark, or shiny rocks, and thus enrich the color and saturation and general richness of a scene. 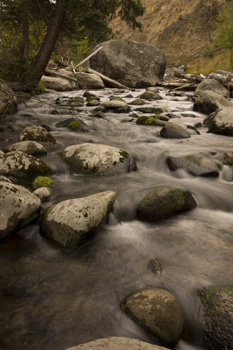 Be careful about fulling rotating a polarizing filter to completely remove reflections off the water's surface.By doing so, you may actually 'erase' the sense of water even being there and, instead, produce a scene that simply looks like it is brown or yellow colored rocks.

The image on the left was fully polarized, and although I think it still works, the only real clue that there is water there is the white patches of water at the rapids. The image on the right has some polarization, but I kept enough reflections in the image so it is clear that I am, indeed, photographing a stream scene.

A lot of photographers automatically reach for a polarizer when they are shooting stream or water scenes, as a polarizer will reduce or totally eliminate glare or reflections of the sky.

This works, but one should use a little prudence when doing so, because the presence of some reflection may actually help, and actually create the sense that water is, indeed, present. In a forest stream scene, for example, if the reflection of a sky is eliminated you might end up with what looks like a waterless stream bed strewn with rocks. Reflections in such cases actually adds to the scene, providing a sense of water that clear, reflection-less water cannot.

When I am shooting water, I do think about using an entirely different filter, the Singh-Ray Variable Neutral Density Filter. This filter operates similarly to a polarizing filter, since the variable filter rotates and, by doing so, increases or decreases the amount of neutral density filtration without affecting the color of the scene. 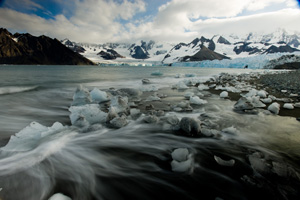 Above I shot an ice-strewn beach at an extremely slow shutter speed -- approximately 15 seconds, which let the waves washing in create neat abstract tendrils of white.

Below I used an 8 second shutter speed to soften the water and a small aperture to achieve great depth of field. 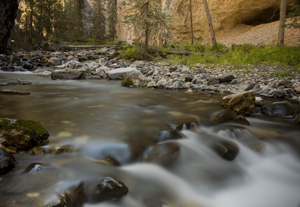 I've used the Variable Neutral Density Filter to shoot waterfalls, streams, rapids, and waves. In each case, the ND filter has allowed me to use very, very slow shutter speeds so that the water, currents, or waves creates shapes and abstracts not visible to the eye and not possible at traditional shutter speeds.

The filter can also be used quite effectively to create an 'amber waves of grain' type of look. Grasses or grain, for that matter, can be shot so slow that, on a windy day, it sways and ripples to create a soft, blurred sense of wave or motion. This really works well when there is some firm, immobile anchor point - think of a wagon in a field of grain, or a boulder or tree stump in a blowing field. The effects can be striking.

To get these effects a slow shutter speed is needed, but with the variable neutral filters that's easy to do. For example, on a sunny day at ISO 100 the shutter speed will be around 1/60th at f22, too fast a speed to create the blurred effect. Adding a polarizer filter can reduce a shutter speed by one or two stops, getting you down to 1/15th or so. 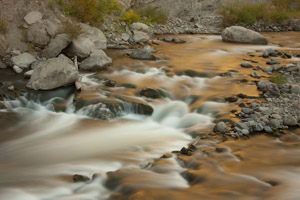 But the Variable ND filter will take you much further. Dialed down a full eight stops, you'll get an 8 second exposure at f22 - plenty slow enough for most any slow shutter speed effect you'll ever need. The ND filter dials down to 9 stops, but the filter is so dark at that setting that it appears opaque and isn't recommended.

I don't use my variable ND filter often, but it is often in my pack and I'm always looking for a chance to use it. The results are so different that the images are almost guaranteed to be refreshingly new and interesting.

So there you have it - my two most important filters for digital photography.