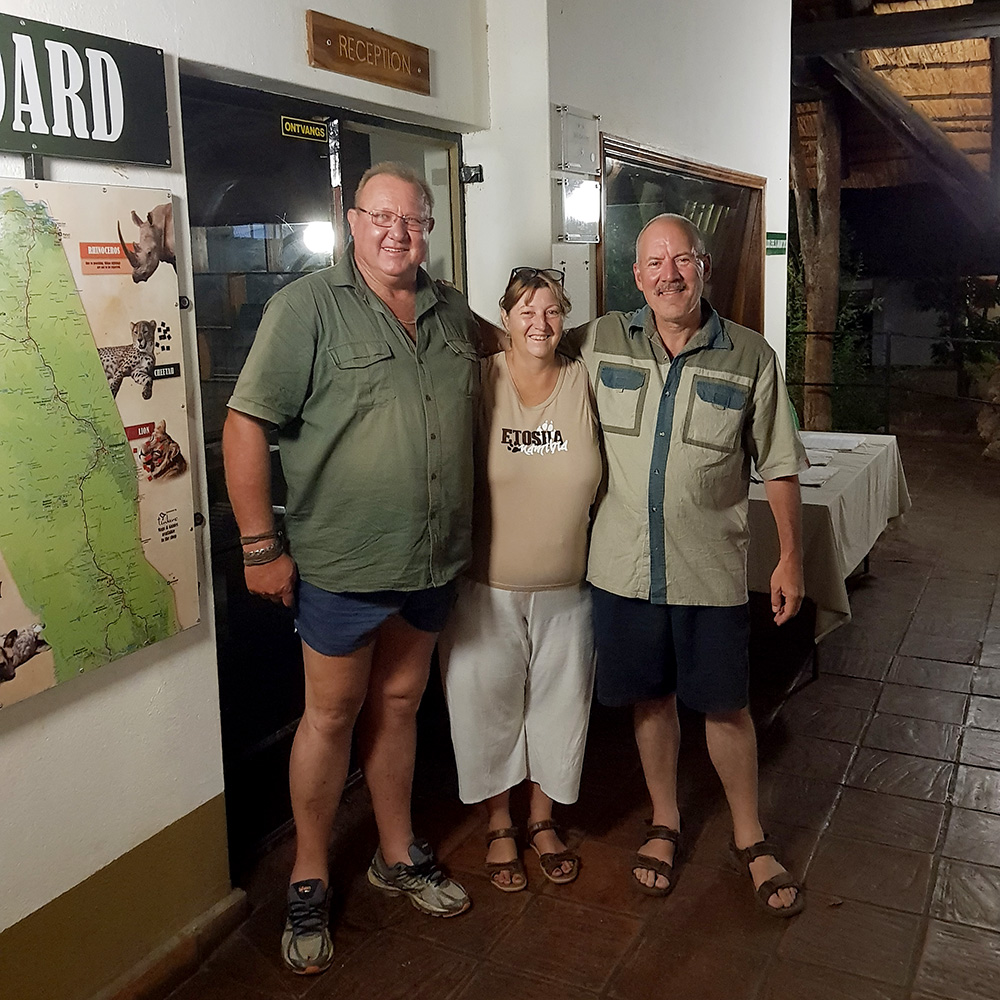 Andre with Jenny and Mario at Shingwedzi Camp reception - after photographing the stars over the palm trees!
Booking.com

We met Andre Bosman during December in the Kruger Park. We had been sitting at a leopard kill sighting near Shingwedzi camp and the leopard had disappeared for the past few hours and, of course, all the cars had left.

We had not seen the kill so stayed behind as we were trying to locate the carcass, that was 'under a bush' and we had spotted a hoopoe constantly flying to and from its nest.

Andre had been at the sighting but returned in case the leopard had emerged and he drove up to us, looked around, and asked if we were photographing the hoopoe. We then realised he's a "real wildlife photographer"!

Most people would not have worked out what we were watching nor would they have returned to the sighting spot in the afternoon heat.

Andre then sat with us in the boiling heat and eventually the leopard returned just before sunset, had a drink and dragged the carcass out from under the bush - we captured some good images as we were both patient and were prepared to endure the uncomfortable heat.

We then joined Andre on a few more game drives and had a great time together, working as a team at sightings, like at this lion pride on a zebra kill behind Shingwedzi camp... 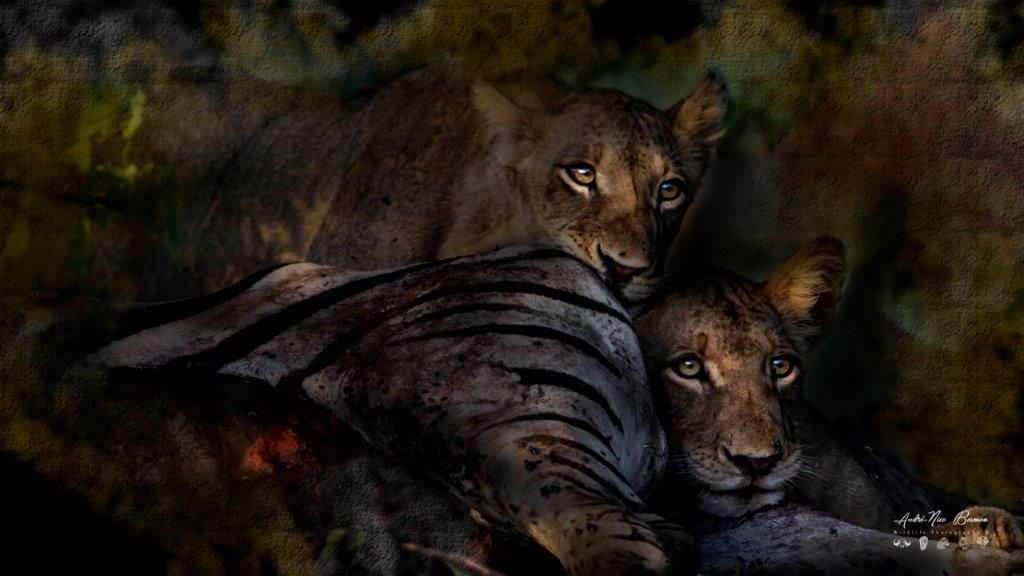 It's not often we find visitors who are able to anticipate animal's actions, are prepared to endure discomfort and are keen to learn more about photography and nature.

Then, after seeing Andre's superb fine art wildlife images we interviewed him and here's the result...

1. Andre, when we met at the leopard sighting near Shingwedzi Camp, you mentioned that you have been photographing nature for just two years! What inspired you to get into wildlife photography? 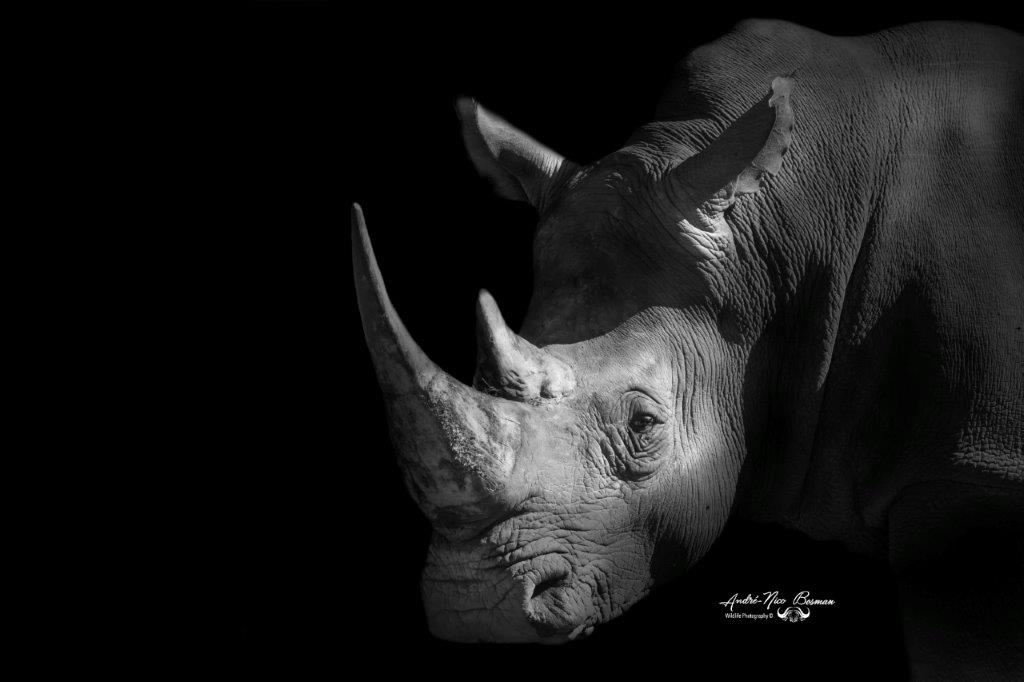 I have always been a wildlife enthusiast. On social platforms I would page through people’s photos and always wished I could capture good photos like they do. I started out with a small point and shoot camera and then the photography bug bit me and I wanted a better camera and lens! I then started talking to photographers on the social platforms and before I knew it, I was totally engrossed in photography and had upgraded my photo gear.

2. When we see many of the images posted on social media, they are simply documenting the subjects and their images end up looking no different to everyone else’s. You, however, go further by interpreting what you are seeing, and you photograph the subject in a way that is compelling and creative, providing a unique image that grabs people’s attention. This is known as 'fine art photography'. What inspired you to do this artistic style of photography?

When I look at different styles of photography on social media platforms, the fine art style appealed to my creative side. When I sit down with a raw photo and start to edit it, the creative juices start flowing and I create what I feel would most appeal to someone looking at my photos.

Here are some examples of before and after editing, some more subtle than others and with all of them the subject 'pops' after the transformation to low-key...

3. How did you learn the skill of fine art wildlife photography – did you teach yourself, attend courses, read books…? 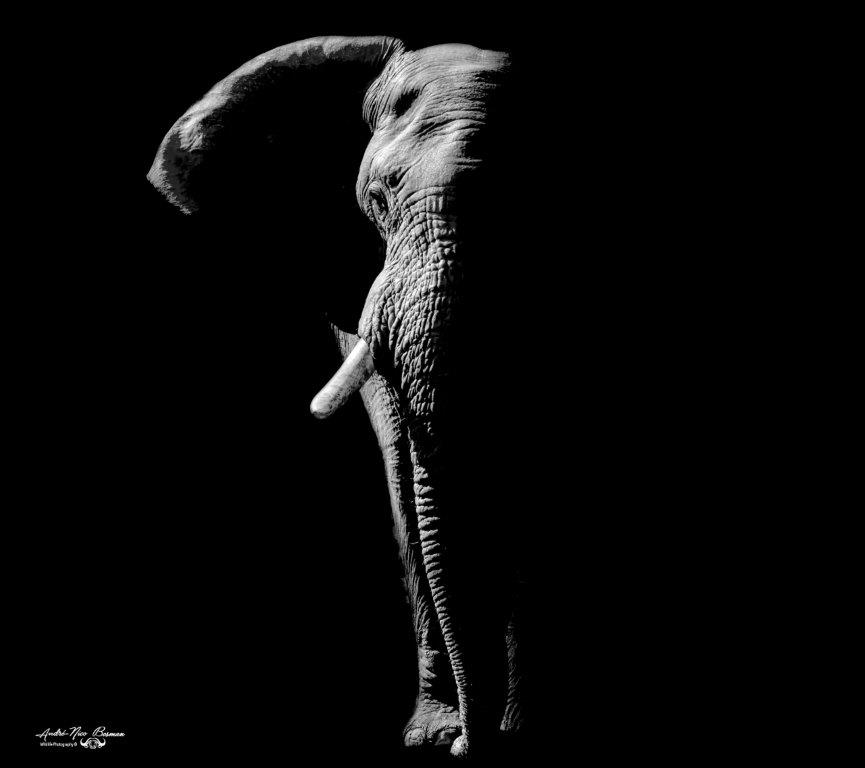 Self-taught using YouTube and online photography courses.  Whenever I don’t understand a setting on my camera or in Photoshop, I'll search on Google and YouTube until I find the answer and understand what I am doing. 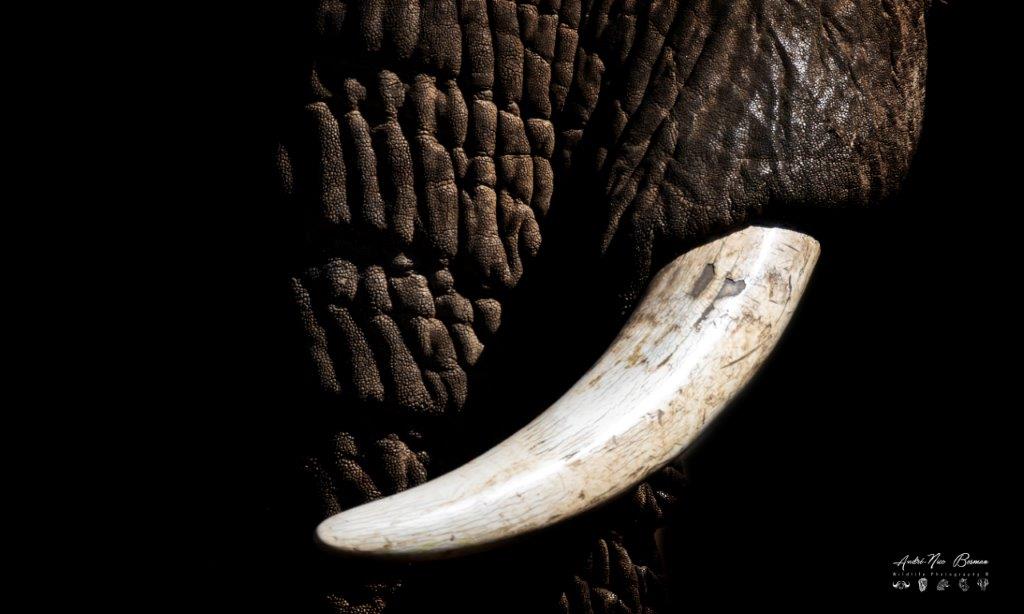 You obviously need to separate wheat from chaff – you will quickly see which websites and video channels provide quality information!

4. Do you try and create the fine art image, for example high-key or low-key, in camera or do you do most/all your editing afterwards in Lightroom and/or Photoshop?

5. Ansel Adams was known to spend one day in the darkroom to produce just one print - how long does it typically take you to create one fine-art image? 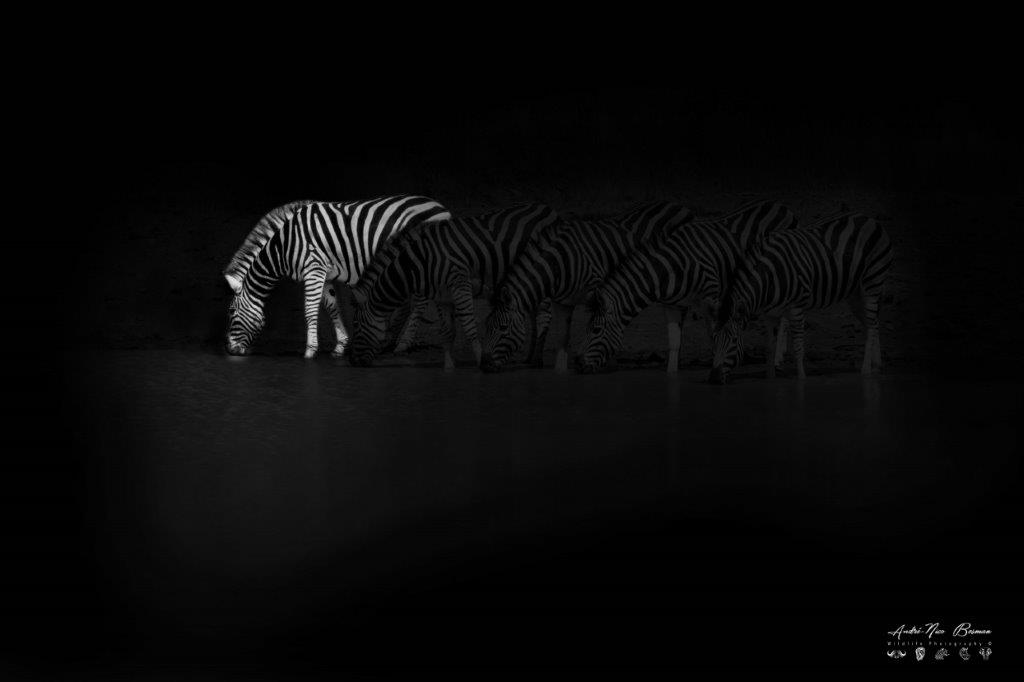 Zebra in the spotlight

I spend the majority of my free time and holidays photographing and/or editing and one photo can take me anything from 2 hours to 2 days to edit.

6. We know that cameras and lenses don’t make the photographer but for those people who are interested, what photo gear do you use? 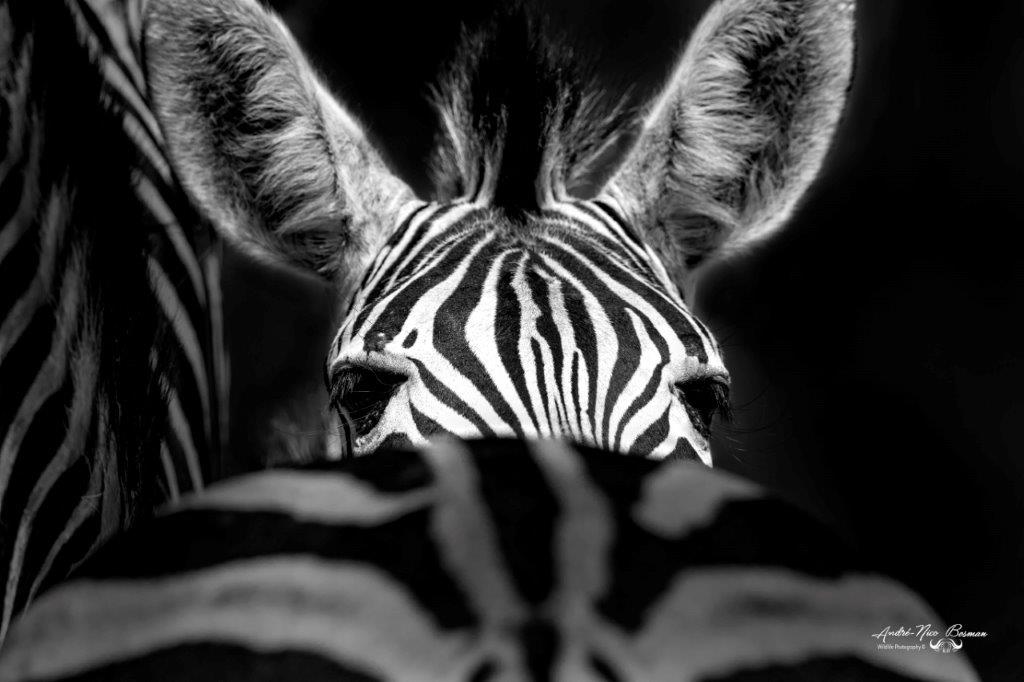 7. What wildlife subjects are you most passionate about? 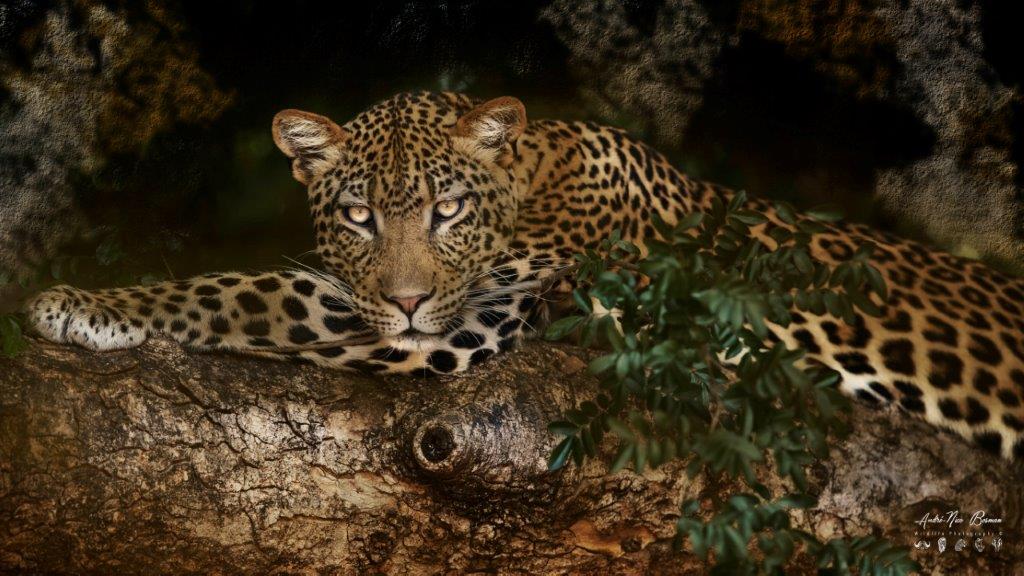 Mostly the big cats like leopard, but in the same breath some of my favorite photos have been landscapes and birds. I love sitting at the hides and dams to see what pitches up - as the saying goes #KrugerNeverDisappoints!

8. Do you have any favourite camps or roads in the Kruger Park and/or Pilanesberg?

My favorite places are mostly in the south of Kruger, around Malelane, Crocodile Bridge and Lower Sabie.  This year, however, I went up North as its quieter in December than the South, which gets very congested during holiday seasons.

My favorite road would be the gravel roads around Biyamiti Weir as it tends to be a leopard hotspot for me... 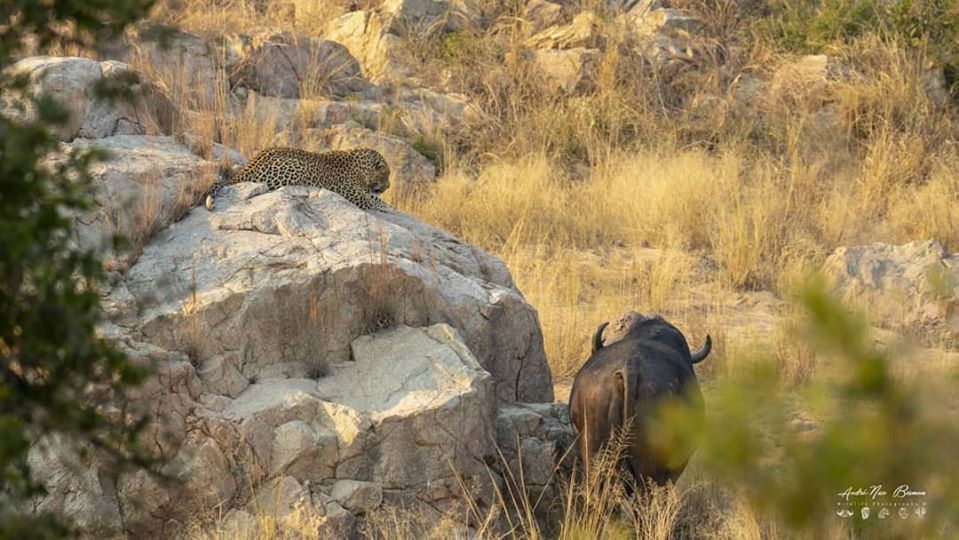 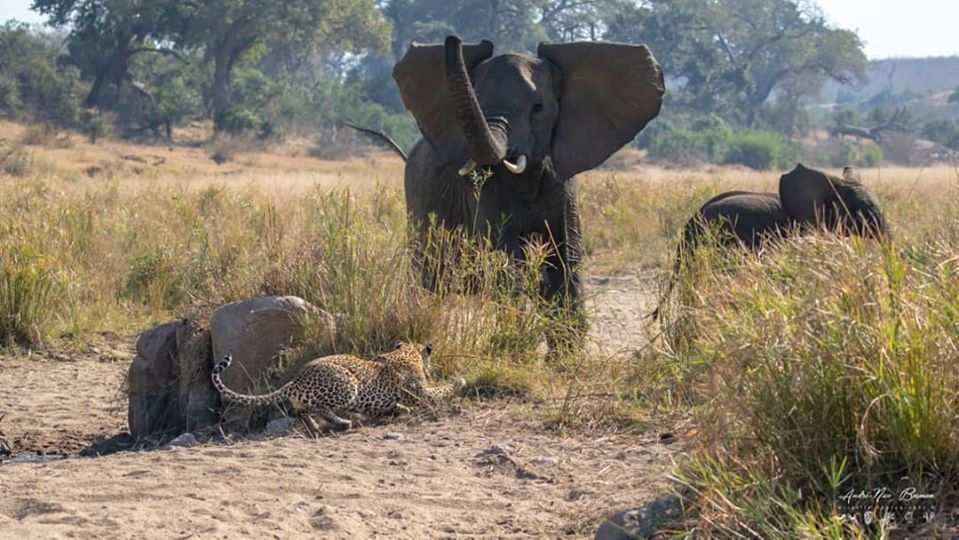 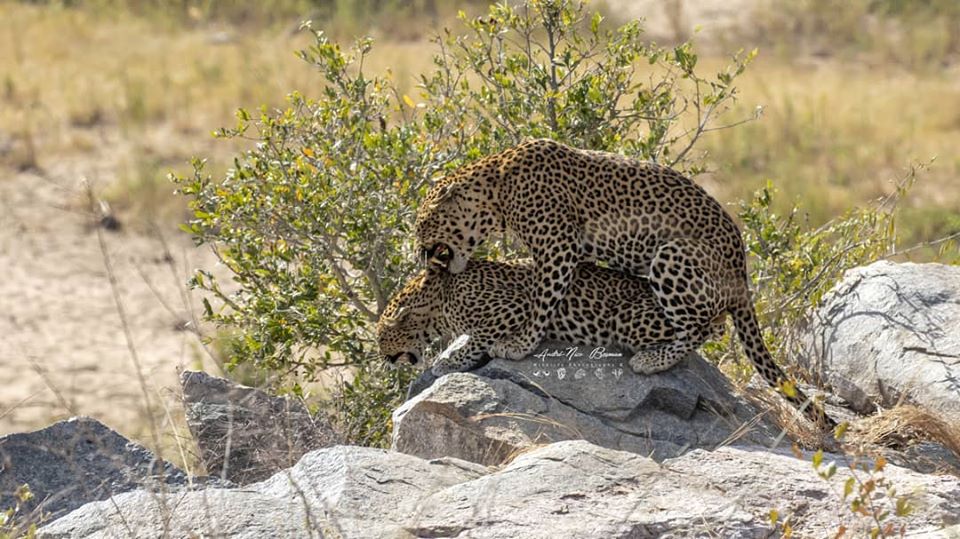 9. Do you have a strategy when going out each day on self-drive photo safaris? 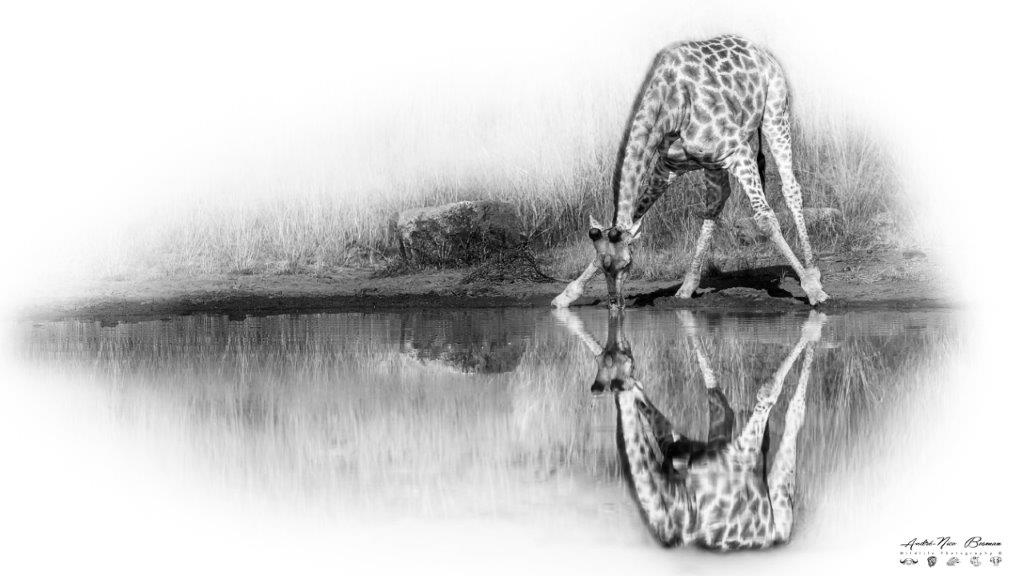 Yes. I plan my trips in the evenings. I usually have three or four ideas of what I am looking for, based on that day's sightings, but also what lighting and which area/s I need to go to achieve my goals for the day. 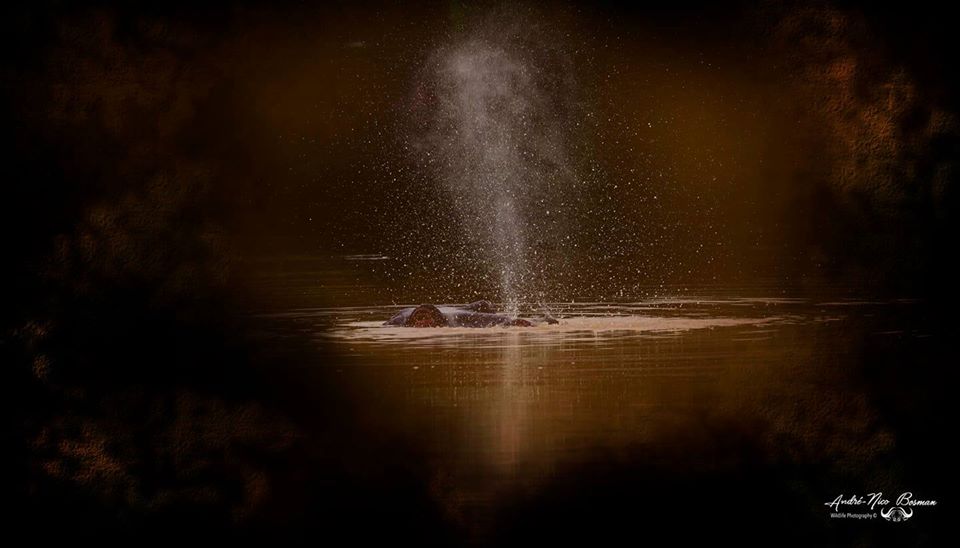 This is a difficult question to answer as I am still learning so much as I go along on my photographic journey.

For most memorable, I haven’t ever seen a live kill, but I have seen six different leopards in one day (around Shingwedzi – the S56 Mphongolo road and the S52 Redrocks road.

The best sighting that comes to mind is the tawny eagle that caught and ate a barn owl! 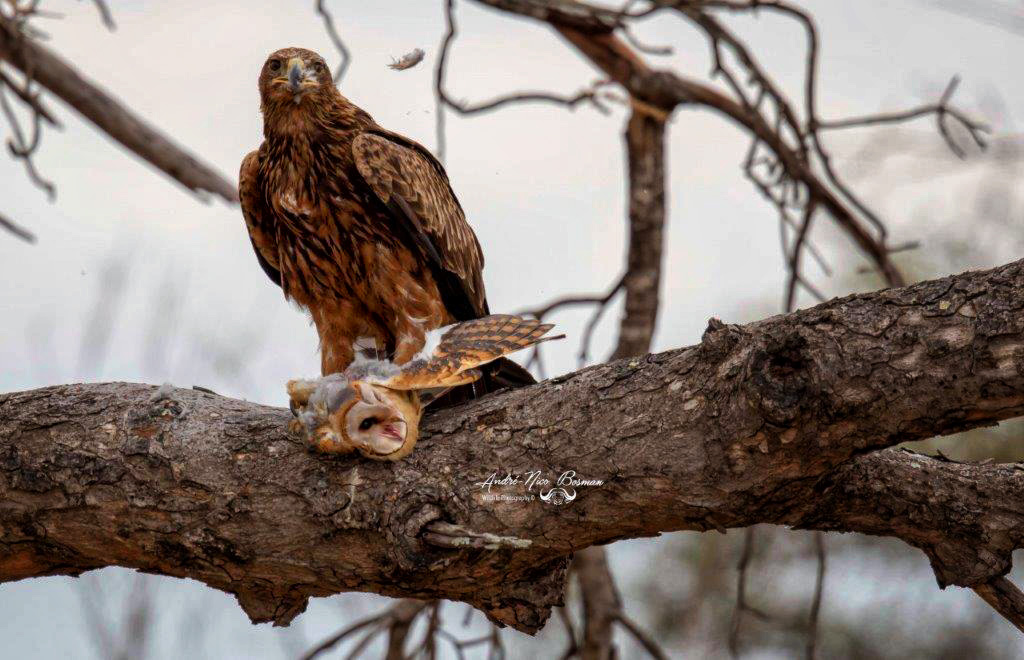 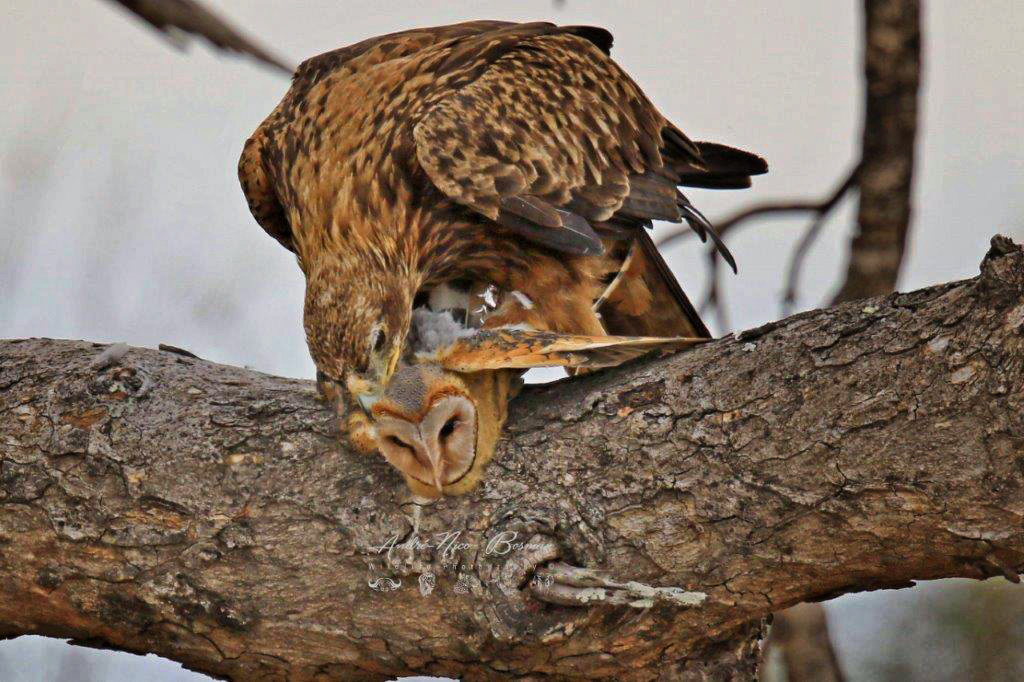 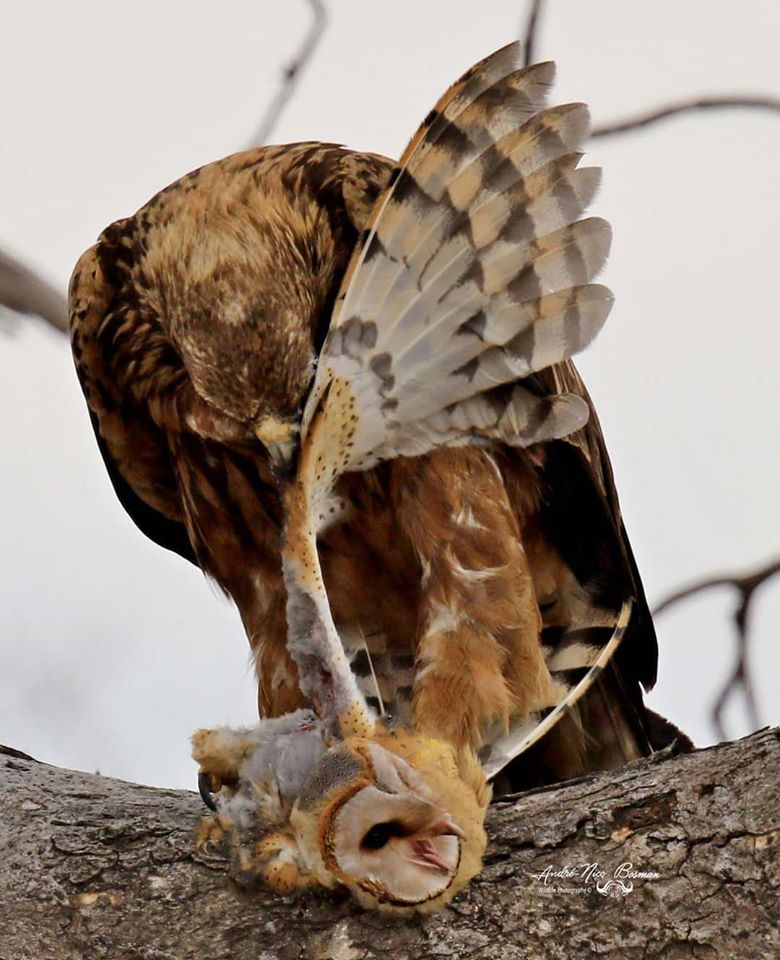 And here are a few extra Andre Bosman images.. 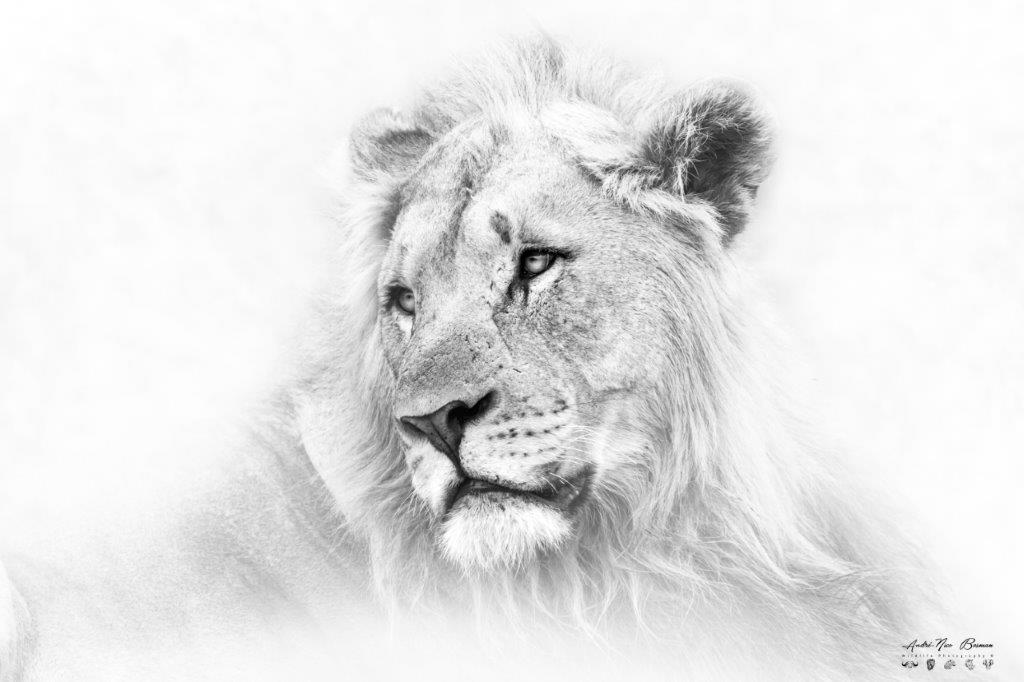 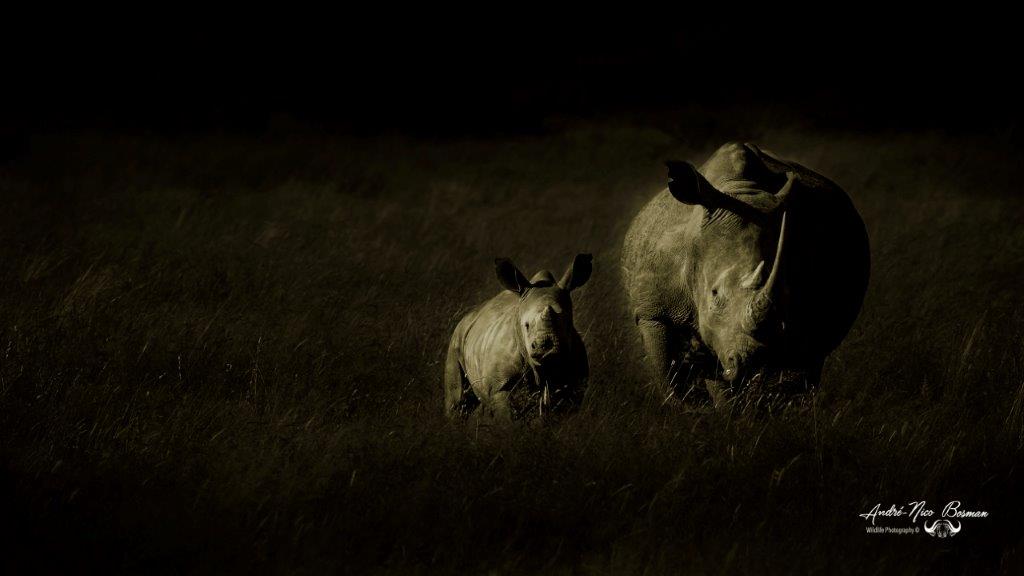 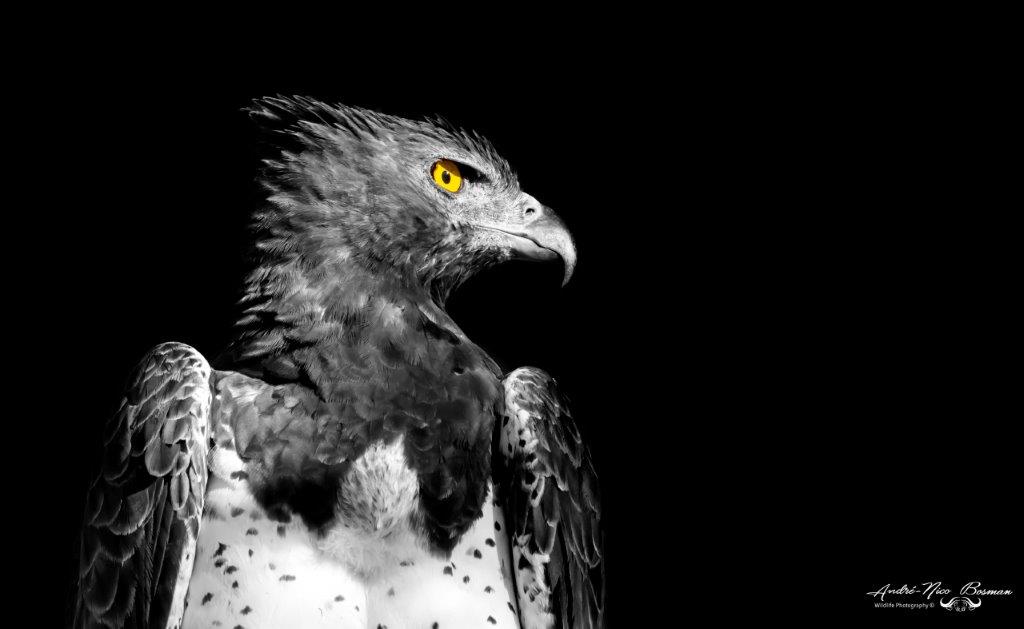 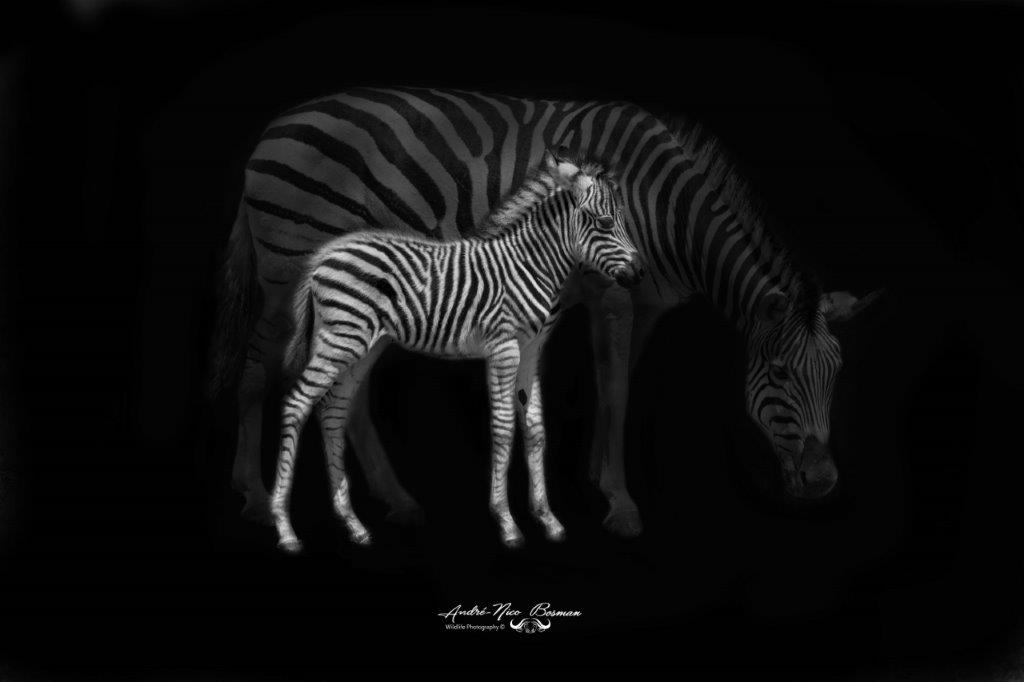 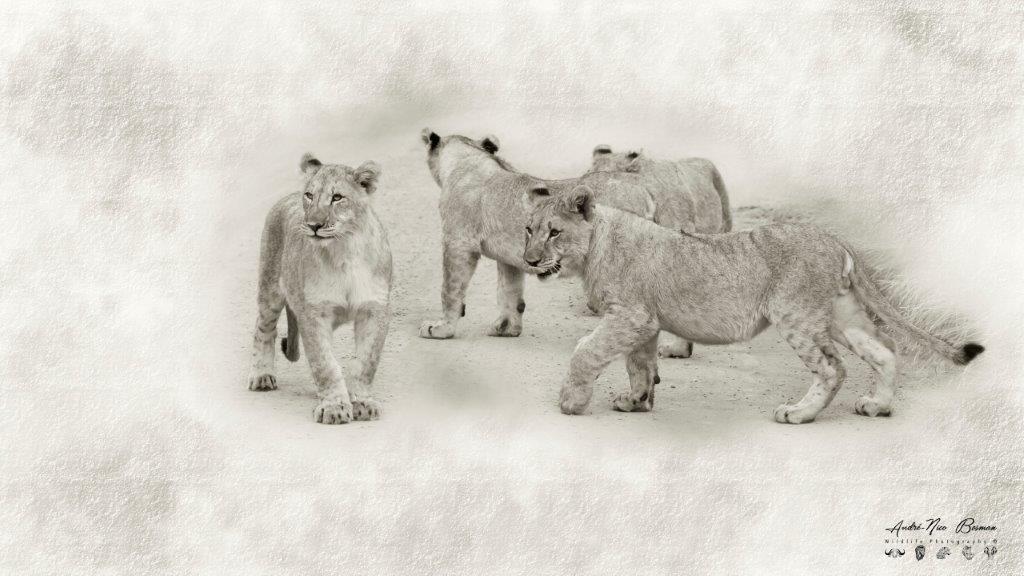